Vietnam-era pilots to keep on flying 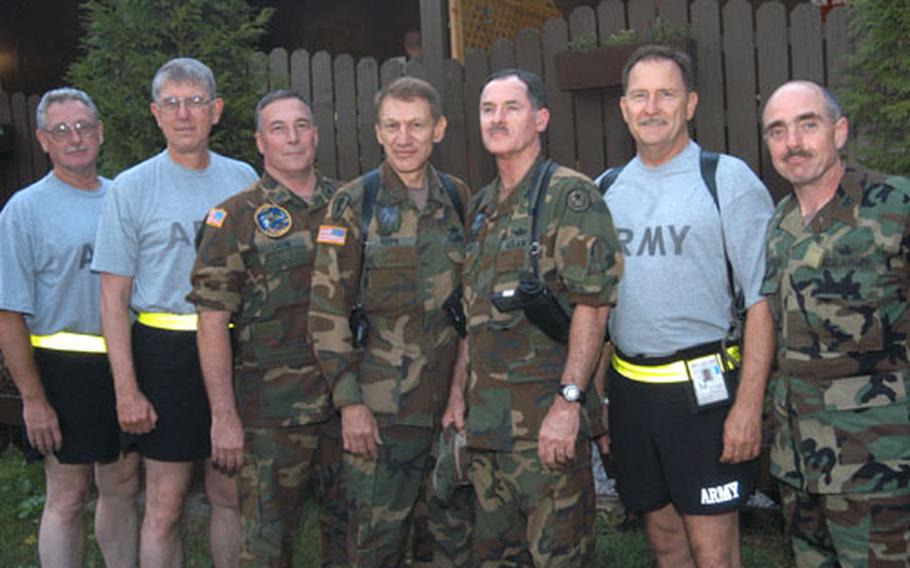 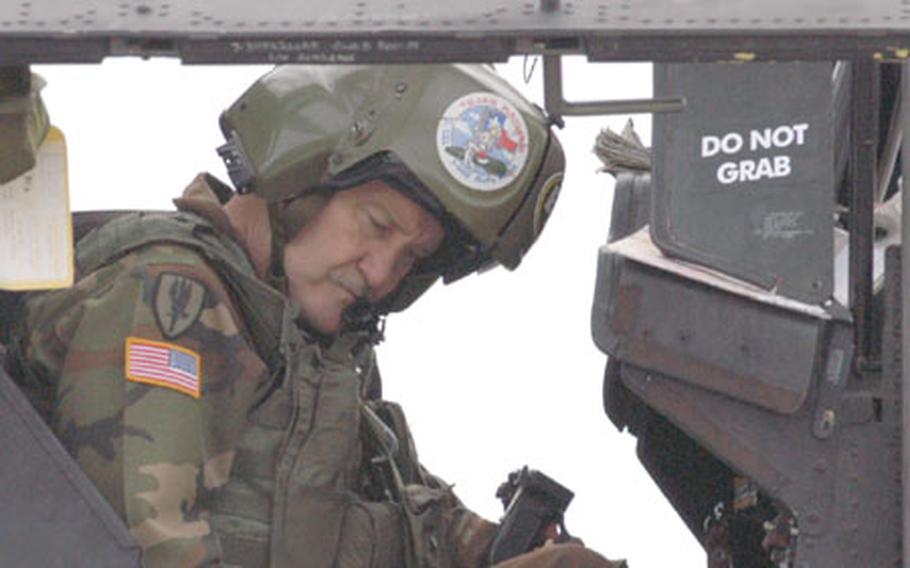 Chief Warrant Officer 4 Duke Russell of Company B, 1st Battalion, 108th Aviation Regiment, prepares for a flight in an Apache helicopter. The love of flying has kept him in the military since the war in Vietnam, through a deployment in Korea and an assignment as an SFOR peacekeeper in Bosnia and Herzegovina. Like five other veteran pilots at Eagle Base, he does not plan to retire before he has to. (Ivana Avramovic / S&S)

Between them, six helicopter pilots currently stationed at Eagle Base have more than 180 years of Army aviation experience and more than 27,000 flight hours.

Add in another soldier stationed at Eagle Base &#8212; Sgt. Mike Clarkson, 54, a flight attendant for Company A of the 1st Battalion, 108th Aviation Regiment, and another 24 years are added to the mix.

They all joined the military in the late 1960s. They knew they wanted to avoid the draft, which would have meant being unable to select their job field.

&#8220;There was no choice. We were going one way or another,&#8221; said Russell, who like all except Sanderson is a member of the 1st Battalion, 180th Aviation Regiment, a National Guard headquartered in Kansas. Sanderson is with the 86th Medical Company, a Guard unit from Massachusetts.

Getting shot down once, and wounded twice during Vietnam did not deter Lane, nor Kennedy, who was lucky to get shot down only once, and without being wounded.

During their military careers, each left active duty for a short break and returned to serve in the National Guard. They left civilian jobs ranging from a sales representative, work in a sheriff&#8217;s office, and full-time military positions as National Guard trainers and flying instructors to participate in this assignment.

The deployment to Bosnia six months ago was the first since Vietnam for some, Korea for others.

Flying missions during the last six months have taken them across the region: to Glamoc, a training range in the southwest of the country; Mostar, in the south; Banja Luka, in the northwest; and Rijeka, a port town in Croatia.

Although bad weather kept their aircraft on the ground shortly after they arrived in March, the pilots still got around more than most other soldiers.

The veterans say they&#8217;ve noticed changes in fellow soldiers during their time in the military.

Kennedy said soldiers are more cooperative now. Many were unwilling to abide by Army rules during Vietnam, even the simple ones, such as keeping short haircuts.

Still, the veterans miss the strength from the old days.

&#8220;Because of downsizing of the Army, we have twice as many things to do, but half as many people,&#8221; Lane said, adding that soldiers now work harder to get everything accomplished.

Lane said the veterans are seldom asked about Vietnam and their experiences there.

He said popular sentiment about the military has changed a lot over the years. Nobody calls soldiers &#8216;baby killers&#8217; these days,&#8221; Lane said.

&#8220;The American people have been extremely supportive,&#8221; Kennedy added.

So have the Bosnians.

The pilots, some of them grandfathers, have to work hard for their right to keep flying with the Army. They must keep fit, and maintain good eyesight and hearing despite the years creeping up on them.

&#8220;We have to meet the same [physical training] standards as everybody else and take flight physicals every year,&#8221; said Sanderson, who keeps a twice-a-day, five-days-a-week exercise regime.

But that does not mean any of the pilots feel like getting out before the mandatory retirement age.

Strong bonds and patriotism have kept them in the military all these years, Russell said. The veterans could have taken jobs as commercial pilots and made more money, but they know they would have lost something.