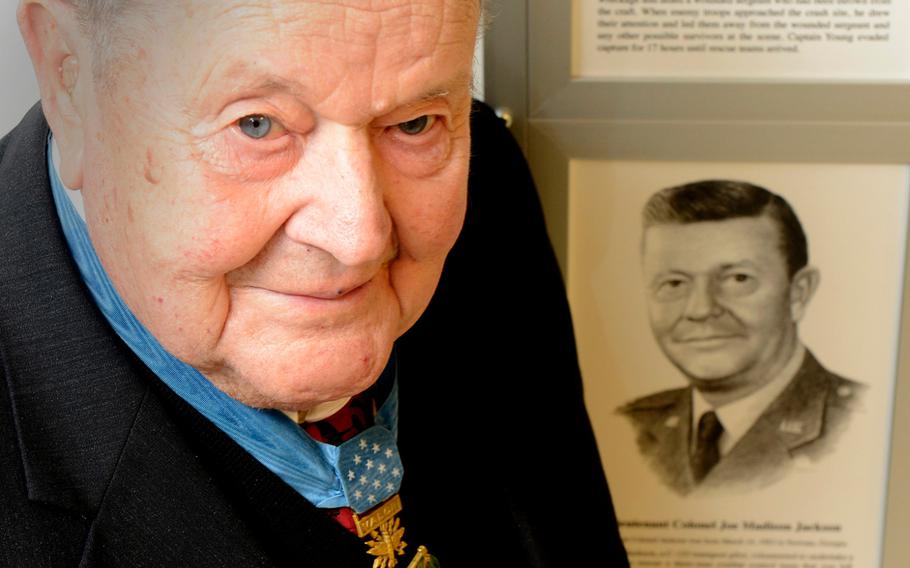 Retired Air Force Col. Joe Jackson poses with a permanent Medal of Honor display in the Pentagon, which depicts him and other medal recipients, on March. 24, 2015. Jackson died over the weekend at the age of 95. (Scott M. Ash/U.S. Air Force)

Retired Air Force Col. Joe Jackson poses with a permanent Medal of Honor display in the Pentagon, which depicts him and other medal recipients, on March. 24, 2015. Jackson died over the weekend at the age of 95. (Scott M. Ash/U.S. Air Force) 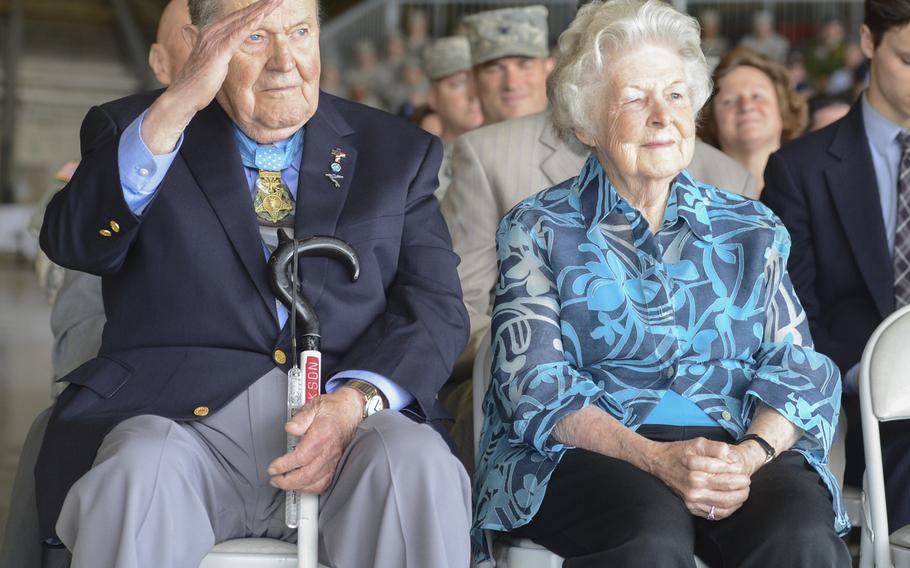 Medal of Honor recipient, retired Col. Joe M. Jackson, joined by his wife Rose, returns a salute to Col. Wyn Elder, outgoing 62nd Airlift Wing commander, during a ceremony on July 17, 2013, at Joint Base Lewis-McChord, Wash. Jackson earned the Medal of Honor in 1968 for his heroic aerial evacuation of a team of pinned-down combat controllers at an overrun airfield in South Vietnam. Jackson died over the weekend at the age of 95. (Sean Tobin/U.S. Air Force) 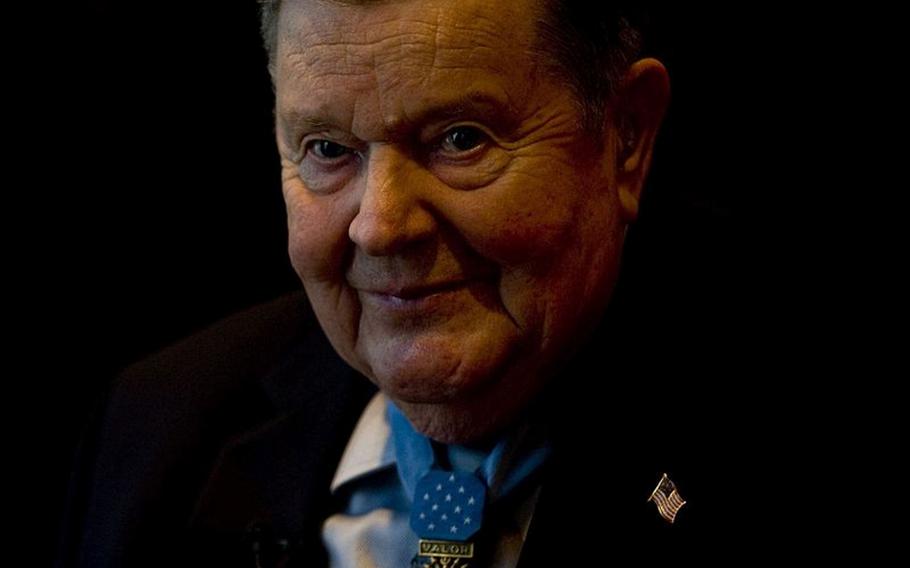 Retired Air Force Col. Joe Jackson, Medal of Honor recipient, gives an interview during the 2010 Medal of Honor Convention in Charleston, S.C., on Sept. 29, 2010. Jackson died over the weekend at the age of 95. (Adrian Cadiz/U.S. Air Force) 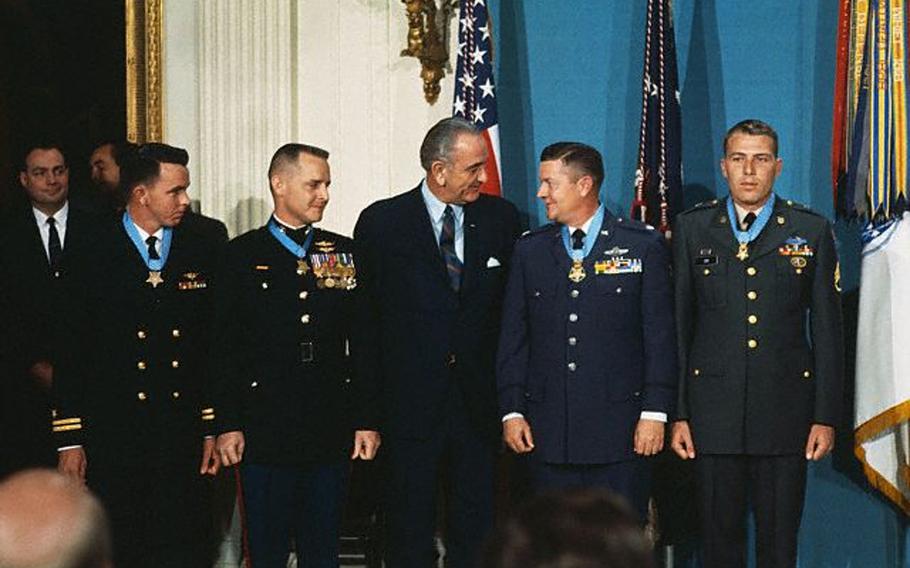 Retired Air Force Col. Joe M. Jackson, a recipient of the Medal of Honor, a veteran of three wars and early U-2 pilot, died Saturday at the age of 95.

The Congressional Medal of Honor Society said he died in Washington state and that funeral services were pending.

Jackson received the military’s highest valor award for his actions in a daring rescue of three combat air controllers stranded on an abandoned Army Special Forces base in Vietnam during the 1968 Tet Offensive.

“His actions contribute to a legacy of valor & our heritage of service before self,” Air Force Chief of Staff Gen. Dave Goldfein said on Twitter Monday. “My heart goes out to all those mourning his passing.”

A native of Newman, Ga., Jackson enlisted as an aircraft mechanic in the Army Air Corps in March 1941. While he was serving as a flight engineer on a B-25 during World War II, the plane’s engine caught fire and the pilot needed Jackson’s advice to put it out. The experience inspired him to seek pilot training, he said in a recorded interview on file with the Library of Congress. He entered aviation cadet training as a staff sergeant, graduating in April 1943 and earning a commission. He spent the last years of World War II as a gunnery instructor at Eglin Field, Fla., but would fly 107 combat missions as an F-84 Thunderjet fighter pilot in the Korean War, earning a Distinguished Flying Cross and the Air Medal with three Oak Leaf Clusters.

Following the war, he became one of the first Air Force U-2 spy plane pilots in 1956, overseeing reconnaissance operations throughout the world.

Then, as a 45-year-old lieutenant colonel in 1968, he volunteered to go to Vietnam, where he flew the C-123 Provider as a commander in the 311th Air Commando Squadron, completing 298 combat sorties.

On May 12 of that pivotal year in the war, just weeks after U.S. forces had broken the monthslong siege of the Marine base at Khe Sanh, he was on what was supposed to be a routine resupply mission when he was called to help evacuate a base at Kham Duc, which was occupied by U.S. Special Forces and Vietnamese irregulars.

“Hostile forces had overrun the forward outpost and established gun positions on the airstrip,” Jackson’s Medal of Honor citation reads. “They were raking the camp with small arms, mortars, light and heavy automatic weapons, and recoilless rifle fire.”

Flames engulfed the camp and ammo dumps were exploding, littering the runway with debris, the citation said. Jackson had been directed to orbit southwest of the air field as several aircraft were lined up ahead of him already, he later recalled.

In all, eight aircraft were destroyed by the intense enemy fire during the airlift and one remained on the runway, reducing the airstrip’s usable length to 2,200 feet, the citation says.

A quick succession of C-130s managed to pick up the last of about 1,500 survivors, but as fighters were being called in to bomb the abandoned base to keep anything from falling into enemy hands, the call came that a three-man combat control team had been reinserted amid the confusion and needed rescue after the last C-130 left.

“I was looking out the window and I knew exactly where they were,” Jackson said later, of the forward air controllers. “We called and said, ‘Roger, we’re going in.’”

He was fully aware of the risks, his Medal of Honor citation says, but Jackson would later say his life’s philosophy was to always do the right thing — which to him meant often doing the thing you least wanted to do.

“From 9,000 feet, I started (an) extremely steep landing approach,” he said. “My airspeed was right at the maximum for that configuration. The rate of descent had hit the limit on the instrument, so I don’t know how fast we were going down.”

Jackson rolled out of a 270-degree turn about 1,000 feet from the end of the runway and touched down within the first 100 feet of airstrip, stopping right where the three men were believed to be hiding out.

“I was the luckiest guy in the world,” he said.

But, as the three men were boarding, co-pilot Maj. Jesse Campbell called out, “Oh my God!” A 122mm rocket, fired directly at the airplane, skidded down the runway and broke in half, stopping right in front of the plane’s nose wheel.

“I mean, really, really close,” Jackson said. “It didn’t go off. Again, I’m the luckiest guy in the world, I guess.”

Once all were aboard, Jackson took off, into machine gun and small arms fire. In the second of what he called that day’s two miracles, there was not a single bullet hole in the plane.

President Lyndon B. Johnson presented Jackson with the Medal of Honor at a White House ceremony in January 1969.

The award changed his life, he would later say, giving him the responsibility of representing all who have served in the military.

“I have to represent the thousands of Americans who have served their country,” he said. “You have to make them proud of what you have done and what they have done and that’s a tough job.”

Jackson retired from the Air Force in 1974. He is survived by his wife Rosamond and two children Bonnie and David, the Congressional Medal of Honor Society said. There are now 73 living recipients of the medal, it said.