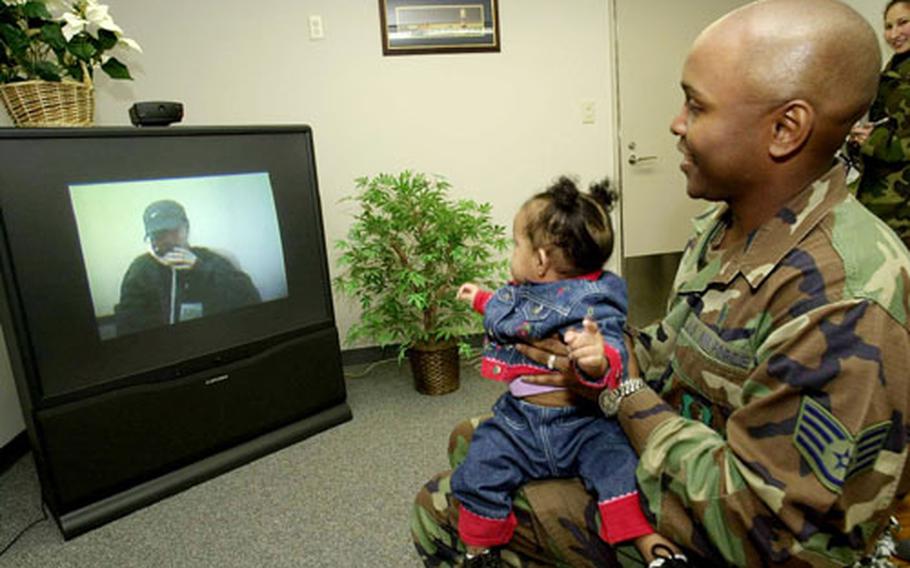 Alofania Taylor appears distracted as her father, Staff Sgt. Tim Taylor, enjoys a few moments talking with his wife, Rica, a staff sergeant deployed to Prince Sultan Air Base, Saudi Arabia. The video teleconferencing room at Misawa Air Base, Japan, is proving to be popular with families of deployed troops during the holiday season. (Wayne Specht / S&S)

MISAWA AIR BASE, Japan &#8212; Families of deployed troops walk into a sparsely decorated room here and moments later are linked visually with Saudi Arabia, half a world away.

Videoconferencing, used for keeping loved ones in touch this holiday season, might be the next best thing to being there.

He brought along the couple&#8217;s 11-month-old daughter, Alofania, who at times appeared not quite sure whom she was seeing on the large-screen television in front of her.

&#8220;Oh, she recognized mommy; they play this finger game,&#8221; said Taylor, a medical administration specialist at the base hospital.

Rica Taylor, an information manager, left Misawa on Thanksgiving Day with other Misawa troops in the 13th Fighter Squadron as part of Aerospace Expeditionary Force 7. They were headed for a 90-day stint in Saudi Arabia.

&#8220;It was no turkey, just get on the airplane,&#8221; he recalled. This is the first Christmas of a seven-year marriage that the family has been apart. &#8220;But she made bedtime-story videotapes for Alofania before she left,&#8221; he said.

&#8220;It helps to draw families closer together, to give them a oneness if only for a short time,&#8221; he said, alluding to the technology that uses a simple television camera mounted atop a TV set.

Users sit on a sofa with a living room backdrop, then a call is placed to the Prince Sultan base to complete the circuit.

The television screen&#8217;s images appear in a slow-motion fashion because, Graves explained, the phone line&#8217;s relatively slow 26,400-baud connection rate limits crystal-clear reception. &#8220;We may try to upgrade the line with an ISDN connection to improve the picture,&#8221; he said.

Integrated Service Digital Network is a telephone connection using digital instead of analog signals. It results in a higher quality picture.

Misawa troops are limited to two 15-minute calls per month. Graves said calls may be made Mondays, Wednesdays and Fridays between 1 and 4 p.m. local time, or from 7 to 10 a.m. Saudi time.

Costs to get the system operating were minimal, he said: about $300 for the television camera and switching device. A television used for training purposes already was on hand.

Aubree Summerhays strolled into the viewing room after Taylor completed his call. She was eager to talk to her husband, Donald, an airman first class and an &#8220;Ammo&#8221; troop with the 35th Maintenance Squadron. He left Japan Dec. 2 for a 90-day desert deployment.

Troops at Misawa are being encouraged to sign up to make calls on Christmas Eve and Christmas Day, Graves said.