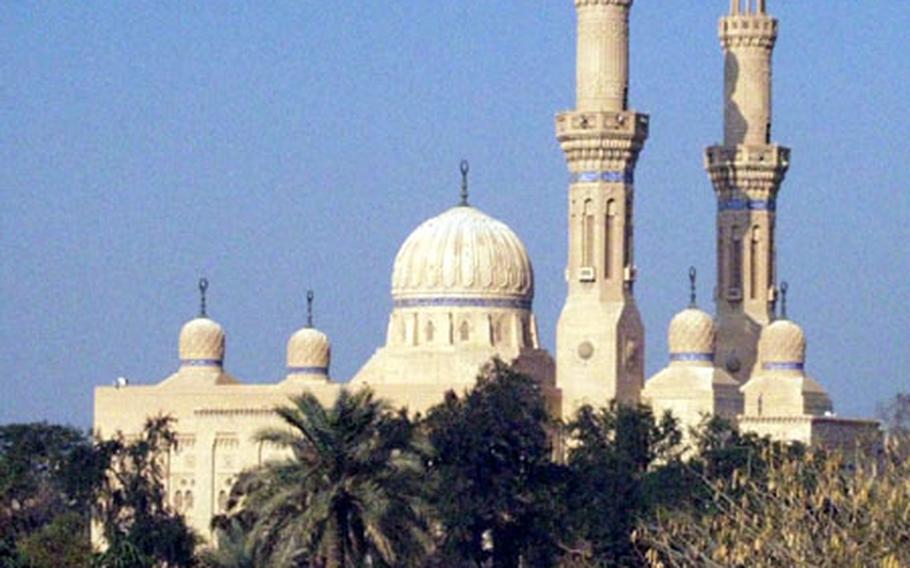 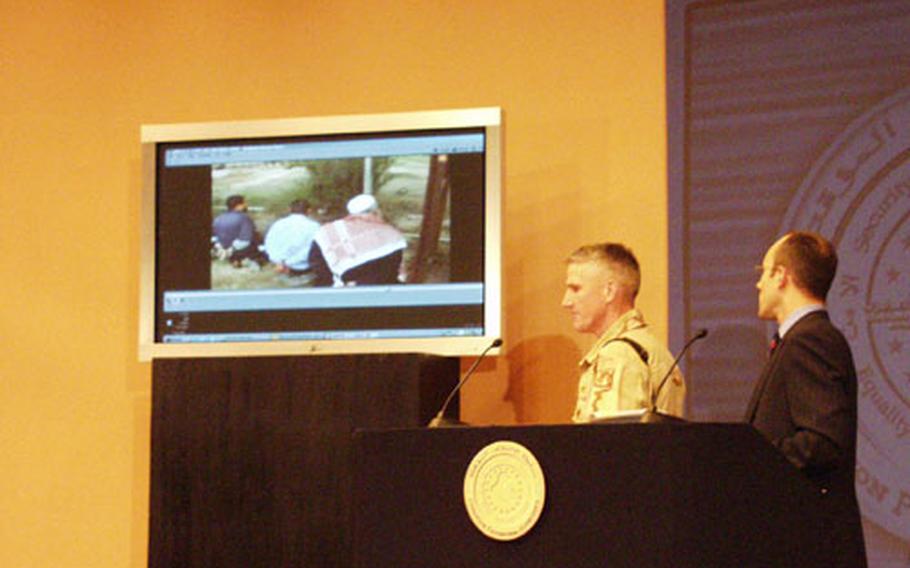 Brig. Gen. Mark Kimmitt, deputy director of military operations in Iraq, and Dan Senor, spokesman for the Coalition Provisional Authority, watch video of a Thursday raid on a Baghdad mosque. Officials showed the video in an effort to calm outrage over the raid, which some Arabs took as an assault on Islam. (Ward Sanderson / S&S)

BAGHDAD, Iraq &#8212; Occupation officials unveiled a short video they say shows that U.S. troops who raided a Sunni mosque and uncovered a cache of weapons did not trash the place, as some have suggested.

The video, shown to reporters, showed the calm sleuthing of soldiers and piles of machine guns and bomb-making materials. But it also showed troops with rifles at the ready, worshippers down on their stomachs and a soldier forcing one man to the ground.

Another scene showed men sitting with their hands behind their backs, a clip meant to counter charges that the men were beaten. Thursday&#8217;s raid resulted in the arrests of 32 people, some apparently not of Iraqi origin. About 20 have since been released.

On Sunday, U.S. officials characterized the raid as uneventful but fruitful and well-organized. The Americans have also denied troops manhandled or trampled the Koran.

No sound accompanied the video because of a glitch, Kimmitt said. However, the general described Arabic announcements over loudspeakers telling everyone in the mosque to get down on their stomachs and away from weapons.

The troops did, in fact, find weapons, though clerics with the Ibn Taymiyyah mosque have said such stores are normal and not intended for use against U.S. forces.

When asked whether the video would further inflame Arab sentiment, Kimmitt said the use of a mosque as a weapons stash should do so, instead.

Kimmitt credited the fledgling Iraqi Civil Protection Corps, a paramilitary security force, with leading the raid. Though the Iraqi troops were present in the video, U.S. soldiers appeared to be in charge.

Dan Senor, spokesman for coalition administrator L. Paul Bremer, said Iraqis are more likely to provide intelligence tips now that Saddam Hussein has been captured. Senor said the Iraqis are also shouldering more of the burden of policing the country.

&#8220;There are more Iraqis defending their country than there are Americans in Iraq,&#8221; he said.

After the video, Kimmitt said insurgents and coalition troops engaged one another some 22 times per day last week. About 9,000 suspects are now in coalition custody.