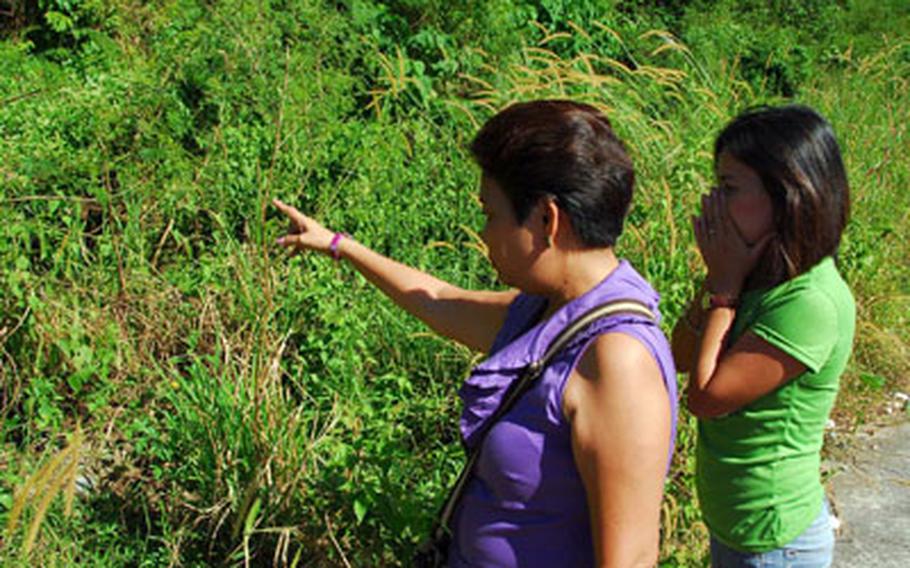 Buy Photo
Ruby Ramores (center) in November shows Lilibeth Eniceo the spot along a rural road where her brother was shot to death and left. Eniceo says she hired the gunman who did the shooting. (Travis J. Tritten/Stars and Stripes)

Ramores&#8217; brother, Peter Turiano, was a Manila taxi driver hired to take U.S. sailor John Bench and his wife and family around Manila on a tour last April.

The friendship between the two women, brought together as a result of Stars and Stripes&#8217; reporting on the case, grew during hours of chatting online and over the phone about the unresolved crime.

Eniceo told Ramores she had been in love with Bench, and had hired the gunman who was supposed to kill Bench&#8217;s family during the Manila taxi ride.

Instead, Eniceo recounted, the gunman executed Turiano in cold blood and dumped his body in a ditch.

For the past five months, the two women worked with Eniceo&#8217;s confession &#8212; reviewing details, following leads, recording a sworn statement, visiting investigators &#8212; to help build a Philippine criminal case against the man they say shot Turiano.

Stars and Stripes was given access to their joint efforts after agreeing not to publish details before an arrest.

On Tuesday, Philippine police acted on the case and arrested Dimple Santos, a 27-year-old Filipino, on suspicion of murder in Turiano&#8217;s death.

Ramores said she offered Santos &#8212; a man no older than her oldest son &#8212; some food while he was in custody and asked him about her brother.

Eniceo moved from suspect to criminal witness in the case last November, after giving police a sworn statement that led to this week&#8217;s arrest. For now, she faces no charges in the Turiano case or any of the other failed murder attempts she claims to have orchestrated with Bench.