Victim of insider attack says US must remain committed to Afghanistan 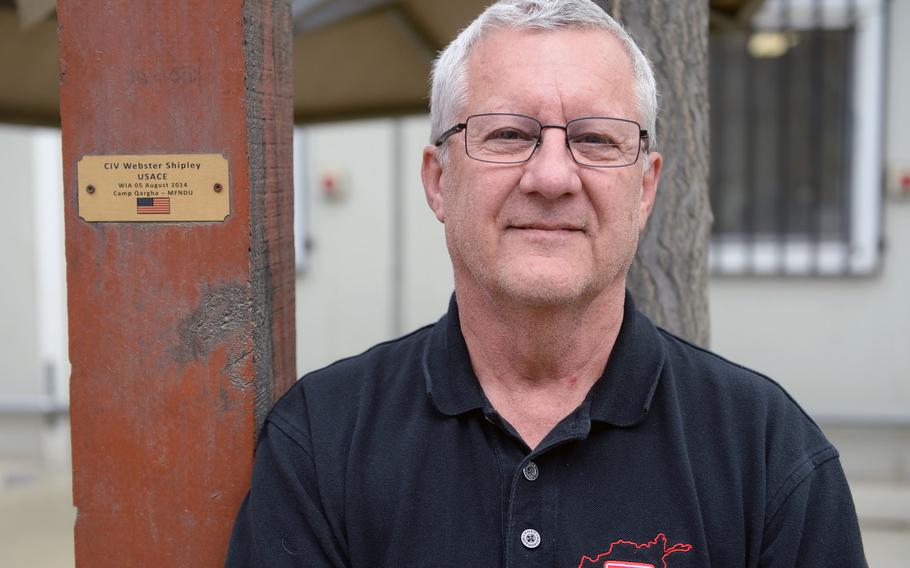 Civilian project manager for the U.S. Army Corps of Engineers Webster E. Shipley, 65, stands in front of a plaque baring his name on April 22, 2014, part of a memorial for victims of a 2014 green-on-blue attack in Kabul. Shipley returned to Afghanistan after being injured in the incident. (Phillip Walter Wellman/Stars and Stripes)

KABUL, Afghanistan — Last week, an Afghan soldier opened fire in eastern Afghanistan killing three U.S. troops and wounding one other, the latest in a string of insider attacks that have spanned the war, now in its 16th year.

While recent security measures have resulted in a sharp decrease of so-called green-on-blue attacks — when Afghan security members turn on international troops — Saturday’s incident shows that militants are still eager to use the tactic to sow mistrust and fear among foreign forces.

According to Webster E. Shipley, the attacks trigger “unjust emotions” that are among the most difficult in combat to comprehend, “but if you don’t keep doing your job, the bad guys are going to win.”

And that’s why he did just that.

Standing next to a plaque bearing his name at NATO’s Resolute Support headquarters in Kabul — part of a memorial to victims of a 2014 green-on-blue attack — Shipley, 65, said he returned to Afghanistan’s capital after being shot by an Afghan soldier for personal closure and because he believes in the mission.

“I believe in what we are doing here, and I wanted to make sure that I get back on the bicycle since I fell off,” he said. “It’s all part of getting rid of the personal demons.”

On August 5, 2014, while working as a civilian project manger for the U.S. Army Corps of Engineers, Shipley visited Kabul’s Camp Qargha with officials from Combined Security Transition Command-Afghanistan, part of the NATO mission that oversees and administers security funding.

During the visit, an Afghan soldiers opened fire, wounding 18 members of the coalition and Afghan security forces. Maj. Gen. Harold Greene, the deputy commanding general of CSTC-A died in the attack, the highest-ranking American servicemember killed on foreign soil during war since 1972.

Shipley’s injuries included two bullet wounds: one through the leg and another in the buttocks.

“What I experienced, was basically 15 seconds of sheer hell,” he said. “That’s all it took, but I saw too much.”

Shipley didn’t want to provide many details about what he experienced that day, saying he’d gone through it enough with specialists. But the several seconds of horror continue to trigger “anxious moments,” he said.

“My worst time was actually when someone came into our office and started popping bubble wrap,” he said. “I was sitting next to a navy lieutenant commander and he saw that I turned white as a ghost and he said: ‘It’s just bubble wrap.’ But it was too real at the time.”

After being treated for his physical injuries in the States, Shipley said he felt compelled to return to Afghanistan. Frightening foreigners and forcing them to abandon the mission is exactly what his attacker, and other green-on-blue perpetrators want, he said.

He returned as a project manger for the U.S. Army Corps of Engineers, in May 2016, but this time at Bagram Air Field. Several months later, he transferred to NATO’s Resolute Support headquarters in Kabul.

With just weeks to go before his deployment ends, Shipley says he has received the closure he was looking for.

But last week’s green-on-blue attack served as a reminder that others are likely to go through similar experiences as the war in Afghanistan progresses with no end in sight.

Sgt. Eric M. Houck, Sgt. William M. Bays and Cpl. Dillon C. Baldridge were killed on Saturday when an Afghan soldier opened fire on them in Nangarhar province. All were from the Army’s 101st Airborne Division. A fourth soldiers was wounded.

“My heart goes out to the families friends and comrades of those involved in the most recent green-on-blue,” Shipley said. But he added that it is important not to let events like these deter the mission.

“I stand by my belief that the Afghan people are good people,” he said. “The vast majority of the Afghans I know, they’re like brothers.”

Echoing the defiant tone of the official statements released after every green-on-blue attack, Shipley, who received a Defense of Freedom medal in 2015, said the Afghan mission is too important to abandon.