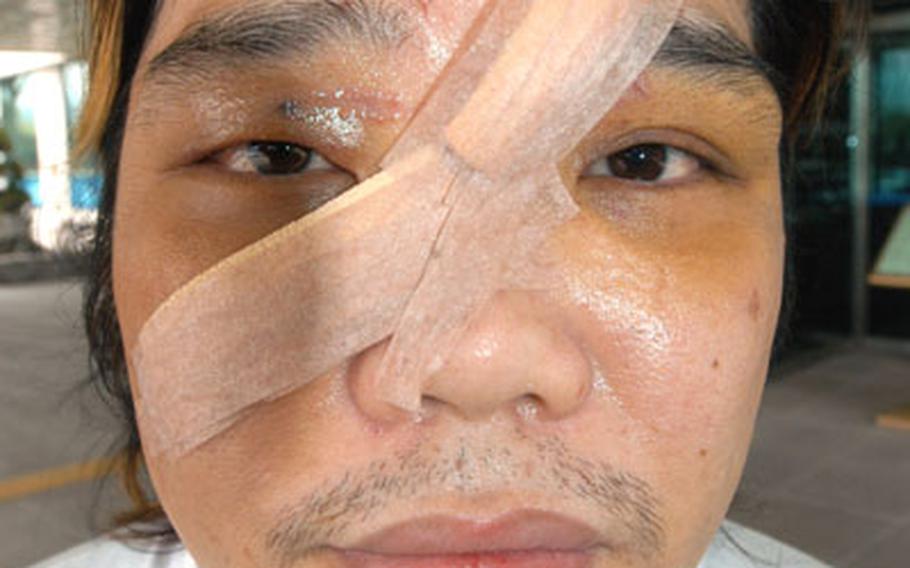 This photograph of Cho Su-Whan, 34, was taken shortly after he told police three U.S. soldiers had accosted him and one cut his face with a broken bottle. (Seth Robson / S&S)

CAMP RED CLOUD, South Korea &#8212; The victim of an alleged bottle attack by a U.S. soldier was arrested by South Korean police after an altercation with gate guards here Sept. 3, according to a 2nd Infantry Division spokesman.

Cho was the victim of an off-base July 2 bottle attack that left him with disfiguring facial scars. South Korean prosecutors last week charged a U.S. soldier, identified only as Pfc. Walker, in connection with the case. The prosecutors didn&#8217;t charge two other U.S. soldiers who allegedly were involved in the attack.

Ivey said Cho came through the camp&#8217;s pedestrian gate and initiated &#8220;some minor physical contact&#8221; with gate guards. He was detained and South Korean police were called, he said.

Cho told Stars and Stripes he was enraged when he heard that prosecutors had charged only one soldier in the bottle attack.

He said he entered the camp at about 5:50 a.m. hoping to meet with U.S. military officials to explain his situation.

Cho said he doesn&#8217;t want to go outside during the day because of the large scars on his face and fear that sunlight would affect the healing process.

&#8220;Whenever I look at myself [in] a mirror, I can&#8217;t help feeling so devastated,&#8221; he said. He said U.S. Forces Korea officials haven&#8217;t offered him an apology or appropriate compensation for the injury and he hasn&#8217;t worked since the attack because employers are put off by the scar.

He still needs surgery to remove glass particles from his face and will need to undergo several plastic surgeries, he said.