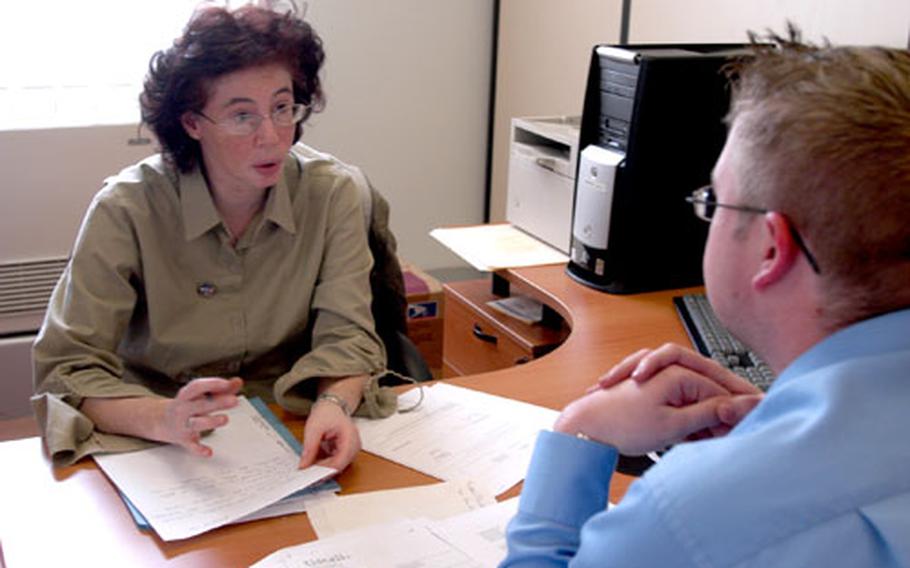 VICENZA, Italy &#8212; After five months of haggling with a local telephone company over problems with his Internet service, Nick White marched over to the local family readiness center last week and enlisted the help of someone who spoke the company&#8217;s language.

White, the housing program manager for the base, speaks only English. Customer service agents at the telephone company, Tiscali, speak only Italian. But Cristina Bowers, a volunteer at the center, speaks both.

With help from a translator, White sent a letter stating his request to end his digital subscriber line contract that was written in Italian.

For many Americans living on military bases abroad, language barriers can make simple tasks such as questioning a phone bill or describing a rattle in one&#8217;s car to a mechanic difficult ones. At most bases, they can find local nationals working in places such as family support centers who are willing to help them.

But few bases offer the extensive translation help found at Vicenza. The recently opened family readiness center staffs 19 volunteers, at various times throughout the week, who speak nine languages ranging from Italian and German to Russian and Czech. The volunteers work when their schedules permit but are usually available two hours a day, said Rita Bonamego, deployment mobilization program manager for Army Community Service, who put together the team of translators. They translate documents, write letters and translate conversations over the phone.

The center&#8217;s translation operation is enough to leave family support offices at other bases envious.

&#8220;We should offer these sorts of services,&#8221; said Cristella Catalano, volunteer coordinator at the family support center in Naples.

When sailors in Naples call the family support center, Catalano scrambles to find someone who speaks the language they need, she said. Catalano hopes to assemble a team of volunteer translators similar to what Vicenza has.

In the meantime, Catalano and others can refer military community members to Military OneSource, a private company contracted by the government that offers a range of services including document translation in 123 languages. Military OneSource promises a turnaround time of no more than two business days, according to the company.

Most people who come in to Vicenza&#8217;s translation help office have trouble communicating with local telephone companies, said Deborah Rogers, one of the center&#8217;s volunteer translators.

The second most common problem: dealing with mechanics, Rogers said.

Others need help getting a permit, or soggiorno, to stay in the country, Rogers said.

Recently, a woman needed Rogers to call a restaurant in Venice where she thought she left her cellular phone. The restaurant manager had not seen it.

And then there are the uncomfortable phone calls she makes, Rogers said, the ones in which people used to American customer service want Rogers to demand their money back for something they bought in Italy.

There are two options. Either call your base&#8217;s local family support center for a volunteer. Or, for document translation, call Military OneSource toll-free from overseas at (+)1-800-3429-6477.