Vicenza troops find themselves surrounded by pipes, not the sky 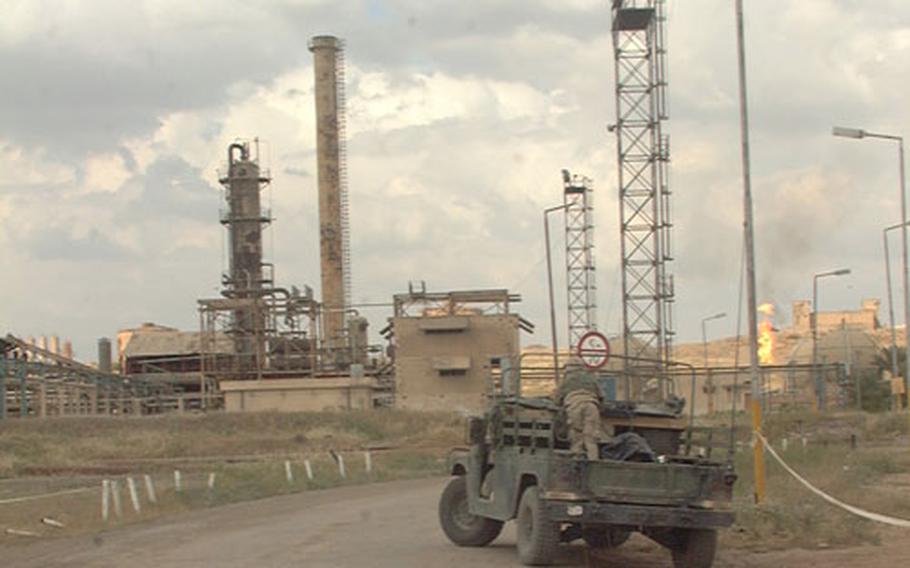 A large oil facility just north of Kirkuk is under the watchful eyes of soldiers assigned to Delta Battery, 319th Field Artillery, 173rd Airborne Brigade. The artillery unit moved in shortly after the area fell to coalition forces in mid-April. Soldiers patrol the facility on foot as well as by Humvee. (Kevin Dougherty / S&S)

A large oil facility just north of Kirkuk is under the watchful eyes of soldiers assigned to Delta Battery, 319th Field Artillery, 173rd Airborne Brigade. The artillery unit moved in shortly after the area fell to coalition forces in mid-April. Soldiers patrol the facility on foot as well as by Humvee. (Kevin Dougherty / S&S) 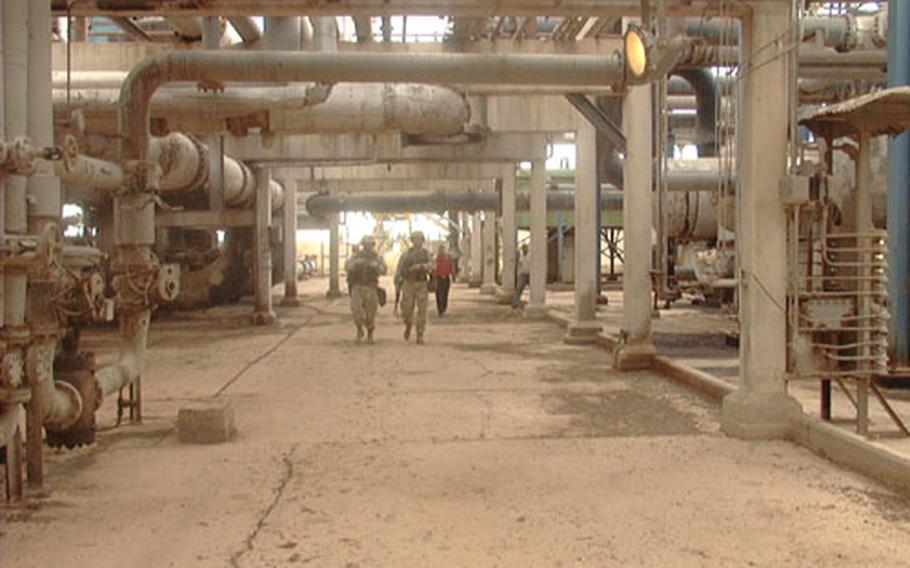 Surrounded by a symphony of hums and hisses, Maj. Robert Gowan (left) and 1st Lt. Brian Nash of the 173rd Airborne Brigade, Vicenza, Italy, walk through a corridor of pipes at the large oil facility north of Kirkuk in northern Iraq. Despite the infrastructure&#39;s shaky state, the facility is working, pumping 60,000 barrels of oil a day. At its peak, the facility&#39;s daily output was 280,000 barrels. (Kevin Dougherty / S&S) KIRKUK, Iraq &#8212; A few weeks ago, they were firing artillery shells at Iraqi forces near the city of Mosul. Now the men of Battery D, 319th Field Artillery find themselves in a much more fluid environment.

Their front-line contributions often caused them to look skyward. What matters most today is what lies deep below their dust-covered boots &#8212; oil and natural gas.

The 173rd Airborne Brigade unit certainly didn&#8217;t expect to be guarding an oil and gas field. Well, guess what? Instead of hearing the whistle and whines of artillery shells, they work amid a symphony of hums and hisses emanating from this rusty but reliable oil facility on the northern outskirts of Kirkuk.

It&#8217;s been nearly a week since the facility drew its first barrel of oil, a commodity key to the effort to rebuild Iraq after a generation of war, international sanctions and presidential plundering. Since the taps were turned on Saturday, this sprawling facility has been pumping about 60,000 barrels of oil a day, said Hassan Shunasi, the day shift control operator, or manager.

Shunasi and Khalil Rafiq, a chemist, said oil from the facility was often transported to refineries at Beji and Salahaddin. The Kirkuk facility also extracts natural gas from the vast subterranean field, a process that involves returning the oil to the earth for future use.

In its heyday, roughly the mid-1970s, Shunasi said the facility produced about 280,000 barrels of oil daily.

&#8220;This place could be the Dallas, Texas, of the Middle East,&#8221; said Army Col. Bill Mayville, the brigade commander who is, at least for now, overseeing the day-to-day administration of Kirkuk and the surrounding area.

After Saudi Arabia, it&#8217;s widely believed that Iraqis are endowed with the largest oil reserves in the world. It wasn&#8217;t immediately clear from conversations with Shunasi and Rafiq just how much oil there is in the north, but the oil region roughly begins west of Irbil, running in a southeasterly direction through Kirkuk and beyond.

The presence of oil is quite evident on the road between Irbil and Kirkuk. In some sections, the ground along the road is saturated with oil, giving the ankle-high weeds a shiny black coat.

Back at the Kirkuk facility, the infrastructure is anything but shiny.

As soldiers were walking amid the vast network of pipes and values and other structures, the sorry state of it all makes one wonder just how long this facility can continue to function.

Shunasi, a Sunni Muslim from Baghdad, began working at the facility in 1968, the same year the Baath Party came to power. He smiles when it&#8217;s pointed out that his tenure has now outlasted the party.

The 53-year-old was not smiling last month when the fighting forced him and other plant operators to cease production. The last drop was drawn April 9, Shunasi said. Shortly thereafter, he explained, a cadre of Kurdish troops &#8212; and maybe other raiding parties &#8212; began selectively looting the place. Ten vehicles, some computers and a stash of documents were stolen.

A few intruders even came knocking on the door of his house, situated in a housing area on the grounds of the facility, Shunasi said. When he opened the door, they demanded the keys to his gray 1999 Chevrolet Celebrity, maintaining it was essentially the property of the fallen government.

Shunasi balked, and his neighbors came to his defense, explaining that wasn&#8217;t the case.

Santos and others in the howitzer fire support unit patrol the facility in Humvees and on foot. For the first few days, the duty was made difficult by the fact that troops didn&#8217;t know who worked at the facility. There are four work shifts, each with approximately 150 employees, according to Shunasi.

Lately, tensions in the area have greatly diminished. Onlookers and job seekers appear from time to time, but &#8220;Yogee,&#8221; a stray black-and-white dog the guys have adopted as their unofficial mascot, best represents the place.

On this late afternoon, Yogee lays on his belly near the front gate.

Spc. Randy Ferrin walks by his mangy buddy, but the dog hardly lifts its head. Yogee needs a bath, but otherwise he looks happy, healthy, content and very sleepy. It&#8217;s been a long day.

Santos, who named the dog, looks at him like a proud papa.

Yogee is a morale booster, keeping the troops pumped as the oil and gas facility behind them labors to propel the Iraqi people onto a more prosperous path.