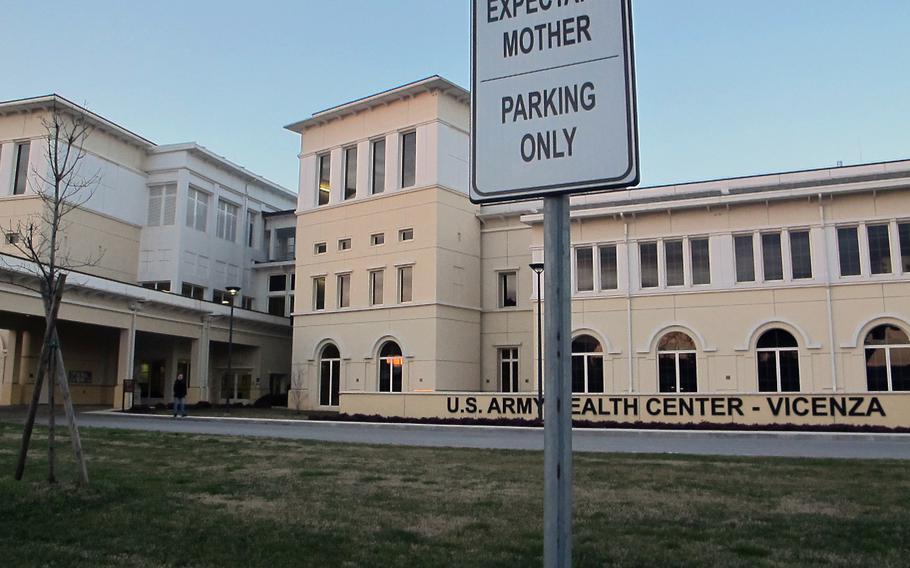 The Army will in June no longer provide maternity care and delivery on Caserme Ederle in Vicenza, Italy. Expectant mothers will be referred to the local Italian hospital or U.S. military facilities farther afield, just as they were before the birthing center was opened in 2005. Since then, military funding has decreased and the Vicenza hospital is providing more Americanized amenities, officials said. (Nancy Montgomery/Stars and Stripes)

VICENZA, Italy — What’s it like for an American woman to give birth in an Italian hospital? Depends on whom you ask, and when it happened.

Tamara Paruzzo said hers, 15 years ago, before the garrison birthing center was built nearly a decade ago, was grim. Six laboring women were crammed into one room at San Bortolo hospital, she said, doctors and nurses spoke little English, and pain relief was unavailable. When one of the laboring women started screaming, Paruzzo said, a nurse told her, “Shut up, you’re scaring the other patients.”

But Alexa Simmons, a civilian who gave birth there last year, said the experience was as pleasant as giving birth can be.

She had a private room for labor and delivery, her husband was with her, she received an epidural to block pain, some staffers spoke English and they were all quite nice, she said.

Afterward, instead of her newborn being whisked off to a nursery, as Paruzzo’s had been, “My baby almost never left my sight,” Simmons said.

Col. Andrew Barr, commander of the U.S. Army Health Clinic on base and the man in charge of managing the reduction in the clinic’s maternity and same-day surgery services, said that he sympathized with Paruzzo.

But he said that the Italian hospital had come a long way in 15 years to accommodate the American way of birth, that Simmons’ experience was now the norm and that was one reason the Army had decided to close the base birthing center.

The other reasons were that volume at the center had always been, and remains, low — some 10 to 15 births a month — making its costs too high in an age of austerity.

“Funding in the Army and the practice of medicine changes over time,” he said. “It’s a very difficult decision the Army Medical Command had to make.”

The birthing center is scheduled to close in mid-June. It opened in 2005 at a cost of $3.2 million while much of the community’s military population was deployed to Afghanistan, the war in Iraq was in full swing, and money flowed freely into Army coffers.

Many pregnant soldiers and Army wives were uncomfortable delivering in the Italian hospital.

“That was a tremendous dissatisfier,” Brig. Gen. David Rubenstein, then commander of the European Regional Medical Command, said in a 2007 interview at the Army’s Heidelberg, Germany, hospital.

Gen. B.B. Bell, former USAREUR commander, “heard it over and over, and he decided women in Italy would have that,” Rubenstein said.

The next year, Heidelberg stopped providing maternity care, sending pregnant women to German doctors instead. Officials said the reason was dwindling patient numbers, fewer resources and superlative local care. At the time, Heidelberg was delivering an average 36 babies a month.

Vicenza officials are organizing tours in March of the San Bortolo hospital, where high-risk pregnancies have historically been referred because of neonatal intensive care capabilities. There are also university hospitals in nearby Padova and Verona, but Barr said that few Americans had delivered there.

One potentially significant difficulty remains, Barr said. San Bartolo, like other Italian hospitals, but unlike American hospitals, does not allow prospective fathers into the delivery room when a Caesarian section is performed. C-sections are not uncommon.

An Aviano Air Base facility, along with the Army’s one remaining European hospital in Landstuhl, Germany, are supposed to provide an option for Vicenza women who’d rather not deliver at San Bortolo. They may choose to “stork-nest” in those locations for a couple of weeks before their due dates, then be delivered by Americans.

But one woman wondered whether expectant soldiers’ unit commanders would really approve that option, and, although the “stork-nesting” women would be on medical TDYs, fathers would most often have to request regular leave to attend the births.

Barr said that 62 pregnant women were expected to give birth on base before June 1. Sixty-two more are expected to deliver after June 1.

The last possible time a woman in labor will be admitted to the center is June 11, at noon, Barr said. That plan took into account a woman who might labor for 18 hours – “God forbid,” Barr said, then be delivered by C-section, then be discharged by June 15, when the Army mandated the doors to the center must close.