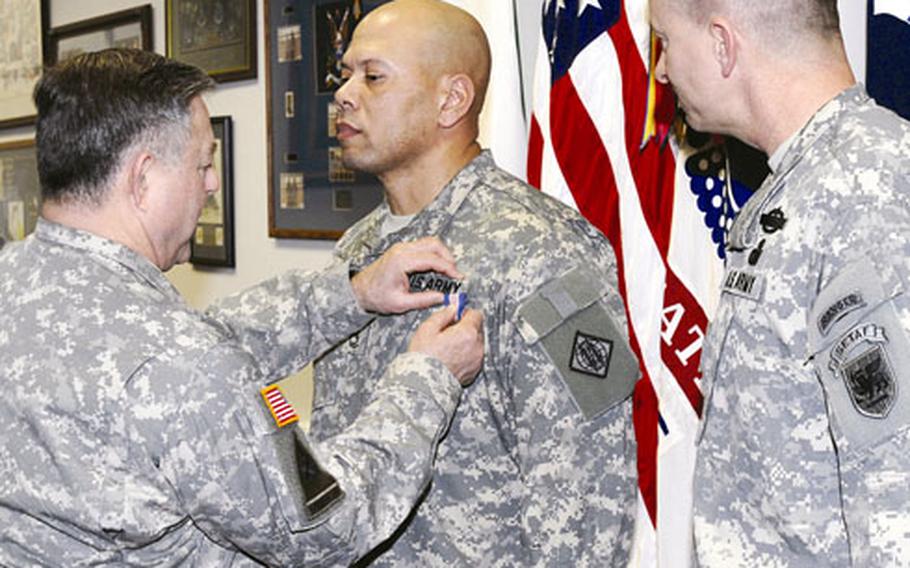 Lt. Gen. R. Steven Whitcomb, left, U.S. Army inspector general, pins the Soldier’s Medal on Sgt. 1st Class Keith Cade. Cade risked his life to rescue a woman and her child from a burning car wreck in east Texas while on leave from Afghanistan in 2005. (Photo courtesy of the U.S. Army)

Reunited with his wife, Mikaela, and four children during emergency leave from Afghanistan, Cade was driving along Highway 59 in Marshall, Texas, on his way to the hospital to visit his ailing mother.

He noticed a pickup pass his vehicle and suddenly veer off the road onto the highway median and overturn. Cade suddenly had a single focus: He quickly pulled over, told his wife to drive the car to safety and ran toward the vehicle.

"I wasn&#8217;t really thinking about anything, really," he said Wednesday, a day after being presented with the Soldier&#8217;s Medal in a ceremony at Caserma Ederle in Vicenza, Italy. "Just about getting there to see if anyone needed help."

Three other motorists &#8212; a U.S. Marine Corps recruiter, a retired soldier and an off-duty firefighter &#8212; had the same idea.

"I cradled him and held him until the ambulance got there," Cade said in a telephone interview from Vicenza.

"It was a collaborative effort. There&#8217;s no way one person could have [rescued the pair]."

He said he talked only briefly with the Marine recruiter at the scene and learned the identities of the two other rescuers &#8212; and two victims &#8212; from a local newspaper reporter later.

"I had to go back to Afghanistan," he said, "so I never had a follow-up and talk to any of them."

Cade, a member of the Southern European Task Force at the time, is currently a noncommissioned officer in charge of personnel for the 509th Signal Battalion in Vicenza. He was presented with the honor &#8212; the highest medal given for acts of heroism not involving actual conflict with an enemy &#8212; by Lt. Gen. R. Steven Whitcomb, the Army&#8217;s inspector general, who was visiting the base.

Cade said it was the first time he&#8217;d seen such an accident firsthand.