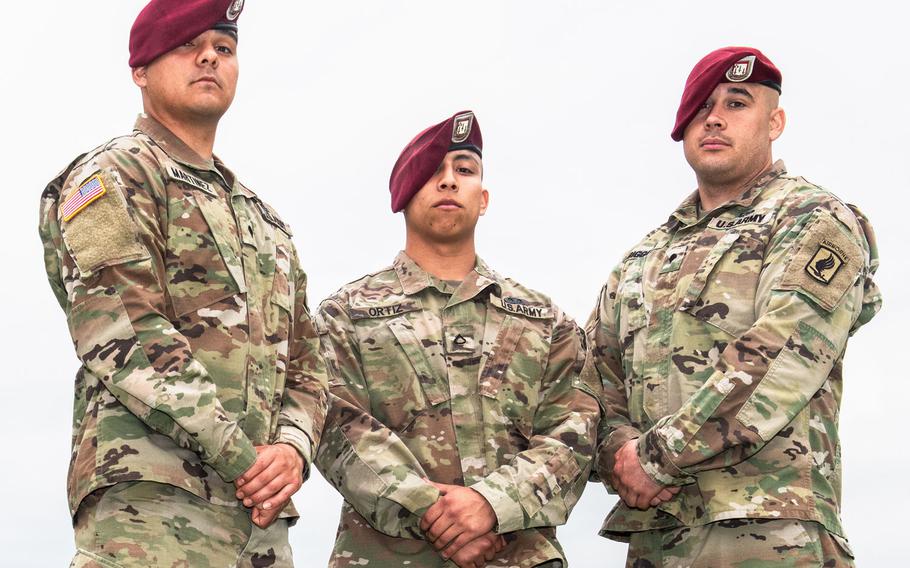 Spc. Avelardo Martinez, Pfc. Christopher Ortiz and Spc. Joey Biggers pose for a portrait outside of the Caserma Ederle gynmasium on May 4, just hours before learning that their team had won the BOSS Strong Challenge. (Photo courtesy Mark Turney/ U.S. Army Garrison Italy)

Spc. Avelardo Martinez, Pfc. Christopher Ortiz and Spc. Joey Biggers pose for a portrait outside of the Caserma Ederle gynmasium on May 4, just hours before learning that their team had won the BOSS Strong Challenge. (Photo courtesy Mark Turney/ U.S. Army Garrison Italy) Installation Management Command Command Sgt. Maj. Melissa Judkins attended a ceremony Friday in Vicenza to present a health and fitness award to a team of local soldiers involved in the Better Opportunities for Single Soldiers program. (Nancy Montgomery/Stars and Stripes)

VICENZA, Italy — A team of Vicenza-based soldiers won an Armywide health competition together with its $25,000 prize, the military said Friday.

The team of soldiers, all members of the Better Opportunities for Single Soldiers program, or BOSS, was named the winner of the BOSS Strong Challenge last September. But the announcement of the winning team was delayed for nearly eight months because of an ultimately discarded plan to produce reality TV videos of the teams throughout the competition.

The Vicenza team scored more points in a variety of activities than four others representing Installation Management Command directorates while undergoing a two-week diet and fitness program.

The prize money will fund the local BOSS program.

During the two weeks in September, the soldiers, assisted by physical trainers, coaches and dieticians, worked out hard and maintained strict, healthy diets.

“It was more demanding than we expected it to be,” said Martinez, with the 54th Brigade Engineer Battalion. “We worked out three times a day.”

The teams were scored on how well they worked together to improve in swimming, rock climbing, golf, horseback riding and running obstacle courses. They also were scored on nutrition and cooking and a community service event.

“They learned things like how to make meatloaf in a microwave,” said IMCOM Command Sgt. Maj. Melissa Judkins, who was on hand for the announcement from IMCOM headquarters in San Antonio, Texas, where the competition was held.

IMCOM oversees the BOSS program, which organizes recreational activities and community service opportunities. It also provides an avenue to discuss with commanders single soldiers’ quality-of-life concerns, such as issues with the barracks and dining facilities. Single soldiers are now a minority in the Army. Just 46 percent of enlisted servicemembers are unmarried, according to a 2016 Army demographics report.