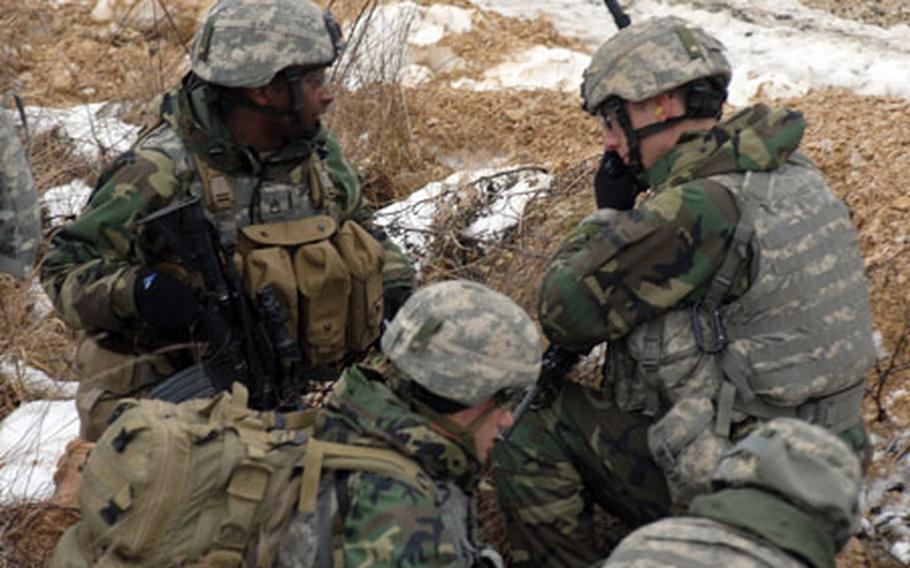 Soldiers from Company D, 2nd Battalion, 503rd Parachute Infantry Regiment react to a simulated attack on their convoy at a training range in Grafenwöhr, Germany, on Tuesday. (Seth Robson / S&S)

GRAFENW&#214;HR, Germany &#8212; Soldiers from the 173rd Airborne Brigade are learning to expect the unexpected.

The airborne troops, who recently learned that they will head downrange later this year, have been at Grafenw&#246;hr&#8217;s Joint Multinational Training Command for two weeks practicing marksmanship, how to react to roadside bombs and how to move in urban terrain.

The most complex part of the training involves a live-fire exercise over a 6-mile course spread across three ranges. During the training, soldiers are given no clues about what they will encounter, according to Maj. Jack Rich, 37, of Swainsboro, Ga., operations officer for 2nd Battalion, 503rd Infantry Regiment, known as &#8220;The Rock.&#8221;

&#8220;They conduct mounted combat movement in open and urban terrain, but they have no clue they are going to get ambushed. We have built in multiple scenarios where they don&#8217;t know what is going to happen,&#8221; he said.

Unlike heavy tank units, which travel straight down Grafenw&#246;hr&#8217;s ranges, the airborne troops face courses that wind back and forth. They have plywood MOUT &#8212; military operations in urban terrain &#8212; sites, each with 20 to 30 buildings and hundreds of rooms.

Troops run through the course eight times, including four blank and four live-fire runs. Each blank run includes day and night portions, and the scenarios are new each time, Rich said.

The exercise is a lot more complex than most training the airborne troops do and builds on more basic training the unit did at Grafenw&#246;hr in September, he said. The fact that most 173rd leaders are veterans of Iraq, Afghanistan or both wars means they have plenty of knowledge to draw on, he added.

The biggest test for the unit before it heads downrange will be a two-week mission rehearsal exercise at Hohenfels&#8217; Joint Multinational Readiness Center in March or April, Rich said.

Company D, 2-503 commander Capt. Michael Jackson&#8217;s troops were on the fourth day of live-fire training at Range 301 on Tuesday.

On the first two days, Company D worked with other units, providing security for maintenance and logistics soldiers. This week, the company ran pure combat patrols, he said.

According to Rich, who has yet to fire his weapon in combat despite seven downrange deployments, the goal of the exercise is to carry out the mission and avoid firing until the target is identified.

Company D soldier Spc. Chris Gilmore, 26, of Kansas City, Mo., said the fact that his unit is headed downrange has not affected how he trains. &#8220;You have to be trained and ready no matter what,&#8221; he said.

A 5-ton truck carrying soldiers from the 173rd Airborne Brigade Combat Team&#8217;s support battalion rolled over while en route to training Sunday morning, injuring eight of those onboard.

One soldier was flown by helicopter to a nearby hospital in Weiden, where he was kept under observation Sunday and Monday before being released on Tuesday, according to Staff Sgt. Jacob Caldwell of the brigade&#8217;s public affairs office. Caldwell said the unidentified soldier suffered bruises and is expected to return to his unit in a few days.

Seven other soldiers suffered minor injuries and were treated and returned to their units, Caldwell said. The soldiers are assigned to Company A, 173rd Support Battalion, which is based in Bamberg.

As a precaution, the brigade ordered all vehicles without snow tires to stay off the roads and prohibited soldiers from riding in the back of 5-ton and open-backed Humvees for more than a day until road conditions improved, he said.

An investigating officer has been appointed to look into the cause of the accident.

Soldiers from the brigade are spending a good part of the next two months training in Grafenw&#246;hr and Hohenfels and are set to deploy to Iraq sometime this summer.