Sgt. Kyle B. Osborn, killed Sept. 13 in Afghanistan, was remembered in a memorial service Thursday at his home base in Vicenza, Italy. (Kent Harris/Stars and Stripes)

Sgt. Kyle B. Osborn, killed Sept. 13 in Afghanistan, was remembered in a memorial service Thursday at his home base in Vicenza, Italy. (Kent Harris/Stars and Stripes) 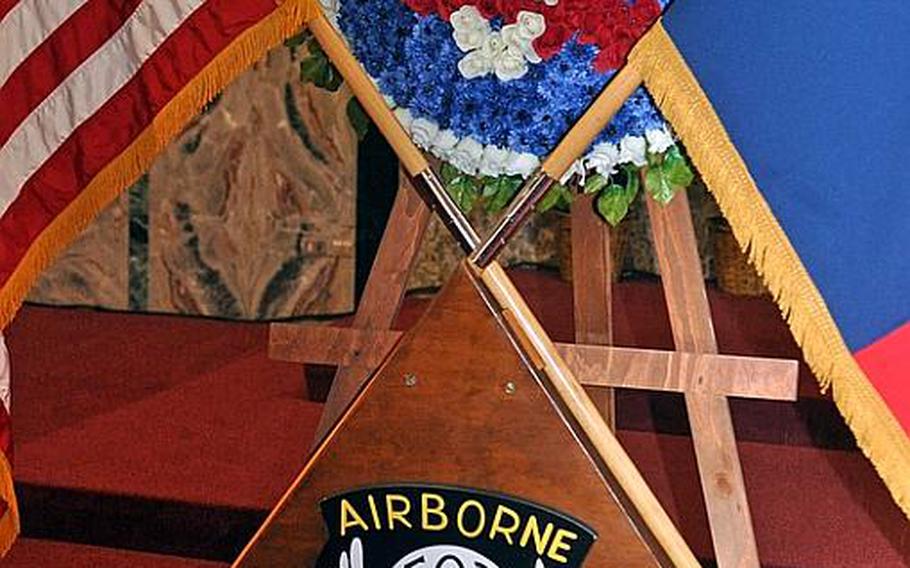 Sgt. Kyle B. Osborn is the sixth member of the 1st Battalion, 503rd Infantry Regiment to be killed since the 173rd Airborne Brigade Combat Team deployed to Afghanistan this summer. The flags, wreath and unit insignia were on display at his memorial service Thursday. (Kent Harris/Stars and Stripes)

VICENZA, Italy &mdash; By all accounts, Sgt. Kyle B. Osborn was a model airborne soldier.

He was remembered Thursday in a memorial ceremony at the post chapel on Caserma Ederle, his home base.

But Osborn, a 26-year-old from Indiana who was killed Sept. 13 in Muqer, Afghanistan, was known for other attributes as well.

His family buried him next to his grandfather in an Indiana cemetery. Some of them attended the service Thursday. It was the latest in a series of tributes for Osborn, according to Capt. Bradley Benjamin, the battalion&rsquo;s rear detachment commander.

First, there were members of Osborn&rsquo;s platoon, who stayed with him after he was killed by rocket-propelled grenades and small arms fire. Troops at his forward operating base then stood at attention, offering salutes as the helicopter carrying his remains flew away. A similar tribute was paid at Bagram Airfield and Dover Air Force Base, Del.

The flags were ordered to fly at half staff in Minnesota, where he attended college. Hundreds turned out to offer support as his body returned to Lafayette.

Hundreds more attended the service, with dozens watching via a live feed at Army Community Services and the Soldiers&rsquo; Theater. This was the third memorial service in Vicenza during the deployment and it was evident after the first one that there wasn&rsquo;t enough room in the chapel to accommodate all those wishing to attend.

At least two more Sky Soldiers will be remembered in November, according to an announcement made at the start of the ceremony. Stars and Stripes does not identify casualties until the family notifications are complete.

Those gathered got a glimpse at Osborn&rsquo;s military career. How he dropped out of Mankato because he wanted to join the Army. And how, once that decision was made in 2007, he attended schools to become airborne qualified, a Ranger and a sniper. After a stint at Fort Polk, Louisiana, they moved to Vicenza in February.

Sgt. 1st Class Guillermo Orozco paid tribute to &ldquo;my fellow jump master, my go-to sniper and a fellow Ranger&rdquo; by describing him as an &ldquo;outstanding leader&rdquo; and one of the &ldquo;most motivated and dedicated soldiers&rdquo; with whom he had served.

Benjamin read several tributes from fellow soldiers still serving downrange. And he also read a moving tribute from Maggie Osborn, which brought forth both laughs and tears from her fellow spouses seated in the front rows of the chapel.

CORRECTION: An earlier version of this article Oct. 5 article gave the incorrect native state of Army Sgt. Kyle B. Osborn's widow, Maggie. She is from Minnesota.