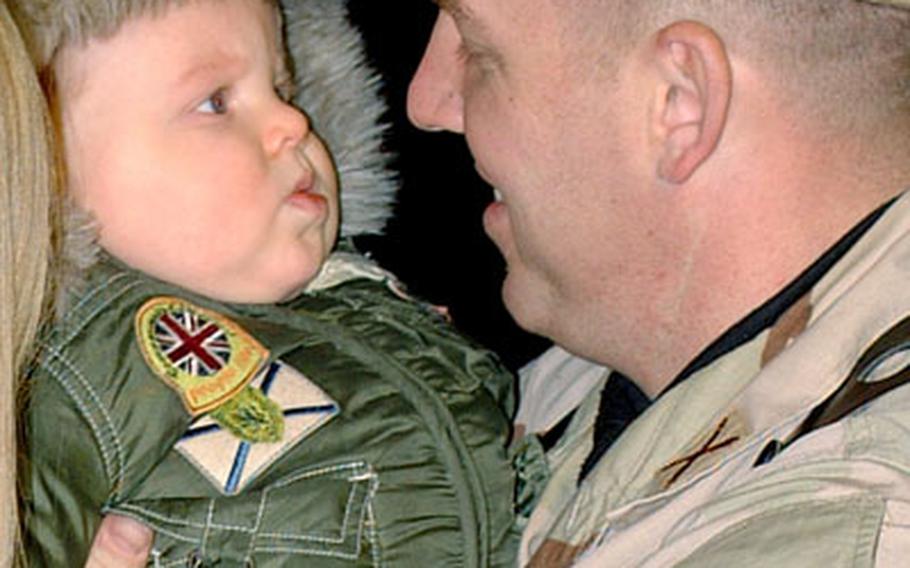 Nicholas Czarkowski isn’t sure what to make of the man holding him — his father. Capt. Kevin Czarkowski is one of hundreds of Southern European Task Force and 173rd Airborne Brigade soldiers returning to nothern Italy after a yearlong deployment to Afghanistan. (Diana Bahr / Courtesy of U.S. Army)

Nicholas Czarkowski isn’t sure what to make of the man holding him — his father. Capt. Kevin Czarkowski is one of hundreds of Southern European Task Force and 173rd Airborne Brigade soldiers returning to nothern Italy after a yearlong deployment to Afghanistan. (Diana Bahr / Courtesy of U.S. Army) 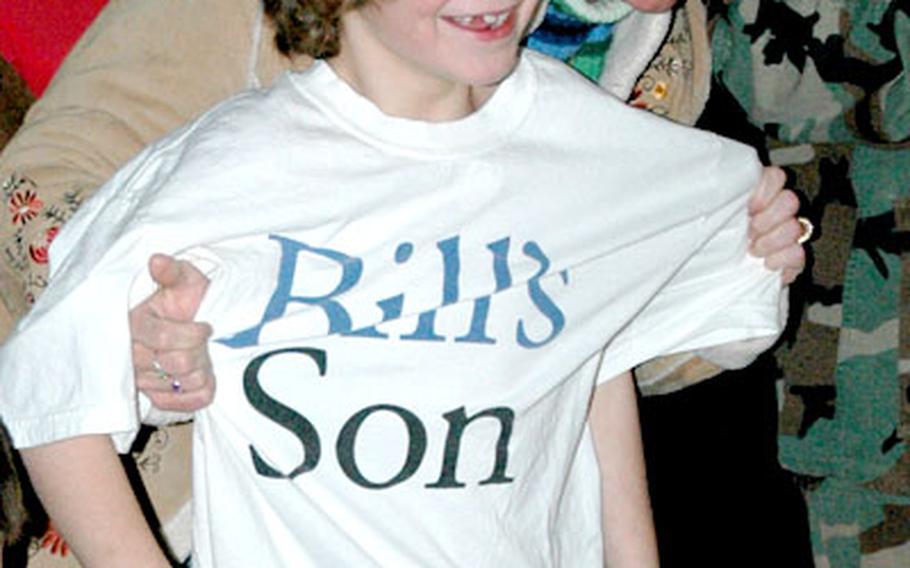 Vickie McCann makes sure that Maj. William Butler has no problem finding his son, Will, in the crowd gathered to welcome back the soldiers Jan. 6 on Hoekstra Field on Caserma Ederle, Italy. (Justin Nieto / Courtesy of U.S. Army) 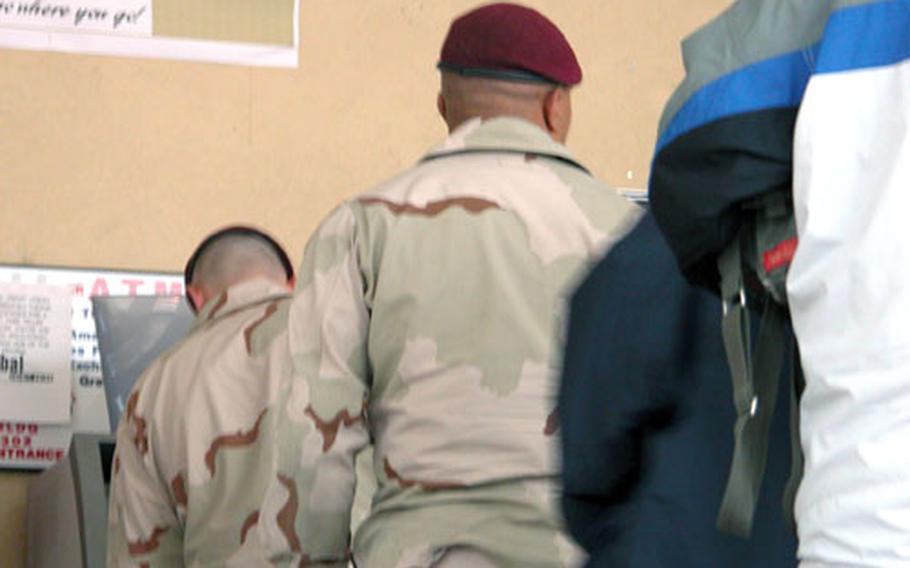 Uniformed soldiers just back from a yearlong deployment to Afghanistan are becoming a more common sight around Caserma Ederle in Vicenza, Italy. From stores to cash machines, the thousands of returning Southern European Task Force and 173rd Airborne Brigade soldiers, among other units, have brought the military back to Vicenza. (Geoff Ziezulewicz / S&S)

VICENZA, Italy &#8212; As he stood outside the Caserma Ederle post exchange, Spc. Charles Whidden said he immediately noticed changes to the small, cramped installation since returning from a yearlong stint in Afghanistan with the 173rd Combat Support Company.

It&#8217;s been awhile, but this base is beginning to look more like an Army community.

After the deployment of about 3,500 soldiers to Afghanistan &#8212; one full of fear, drama and visceral tragedy &#8212; the streets of Caserma Ederle are getting more boots on the ground every week. The soldiers are coming home, and the joy is apparent.

&#8220;All the soldiers are out and about in tan uniforms again, and the store is running out of things,&#8221; Sue Kennedy said this week. Although her husband, 173rd Airborne Brigade Sgt. Eric Kennedy, has not yet returned, she said the blossoming energy and happiness are infectious. &#8220;I&#8217;m enjoying seeing everybody with their spouses.&#8221;

The Vicenza-based Southern European Task Force led an amalgam of units, including the 173rd Airborne Brigade, for a year in Afghanistan. It was the largest rotation of European-based American forces in and out of Afghanistan since 2001. SETAF commanded a group of units that were put together to replicate the capabilities of a full division, said Sgt. Maj. Lawrence Lane, a SETAF spokesman.

Early elements started trickling in during January, with most coming back this month, and the final pieces coming through in March, he said.

As the troops get acclimated back to life in Europe and away from the war zone, the Vicenza community also is getting used to them again, said Margret Menzies, spokeswoman for U.S. Army Garrison Vicenza. All services are extending their hours to accommodate a larger influx of shoppers, she said, and the garrison is offering discounted tours and new child-care options.

The local Power Zone, anticipating an influx of young servicemembers with some money saved up, has stocked up on high-end electronic items for the returning soldiers, said Alberto Campiglia, a sales associate at the store.

A sure sign of returning troops in the coming weeks will be empty cardboard boxes on the curb from new TVs, Lane said, adding that such purchases are at the top of some soldiers&#8217; to-do lists.

Because of barracks renovation, some soldiers who left last year had to box up their personal items and are now moving back into their housing, Menzies said.

Aside from life&#8217;s little details such as car or housing issues, troops are also going through the standard seven half-day reintegration sessions.

Army Chaplain (Maj.) Leon Kircher estimated that he has briefed 500 soldiers so far.

Soldiers need to emphasize the positives of being back while acknowledging how they feel about their deployment, he said, adding that getting reacquainted with their families also will take time.

Whidden said it has been difficult sliding into the life schedule that his wife, Laura, has adopted in his absence.

Laura Whidden said it&#8217;s a negligible issue compared to having her husband back.