Vicenza prepares for community to grow under transformation 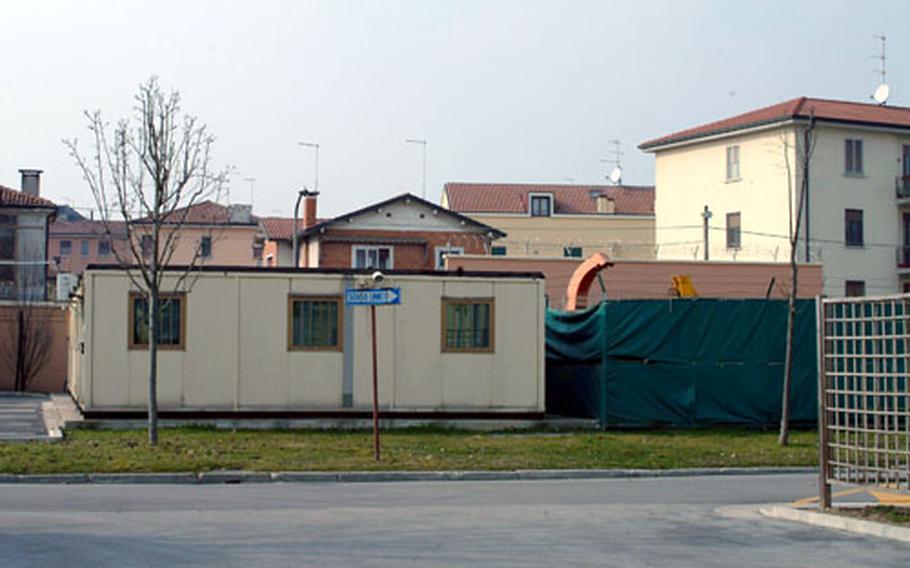 Italian buildings butt right up against the walls of Caserma Ederle, the Army’s main base in Vicenza, Italy. While the Vicenza-based 173rd Airborne Brigade is slated to grow by up to 2,000 troops as part of the Army’s transformation process this year, there’s no room to grow at the base. A nearby Italian airfield and other land is being pursued for housing and office space. (Diana Bahr / U.S. Army)

VICENZA, Italy &#8212; A stroll down the streets of Caserma Ederle, the main Army base in this northern Italian town, brings to mind a bulging waistline crammed into a pair of pants that are just too tight.

Unlike some American military bases in Europe, where the layout and aesthetics are reminiscent of a college campus back home, Caserma Ederle is a mix of cramped roads, tight parking lots and amenities packed in side by side. Soldiers and their families swirl everywhere. Right outside the base walls, just a few feet away, the Italian community looms, and there is little buffer.

But regardless of the state of Vicenza Army facilities now, growth is coming. The Army&#8217;s transformation plan for Europe includes turning the Vicenza-based 173rd Airborne Brigade into a light brigade combat team this summer, roughly doubling its size in the process.

That means about 2,000 more troops will be based in Vicenza, creating a need for more space and resources for soldiers and their families.

So while particulars are still being smoothed out, the military community is slowly moving toward its future as envisioned by the higher-ups. Most of that growth will have to happen outside the walls of the fit-to-burst Caserma Ederle.

Negotiations continue with the Italian government for use of Tomasso Dal Molin, a nearby Vicenza airfield, to provide work space for the extra troops that will come with the 173rd&#8217;s transformation, King said.

An agreement was reached in April with the Italian government to use part of the base in the future.

Turning the 173rd into a BCT will include folding in parts of the 1st Infantry Division, which is slated to stand up at Fort Riley, Kan., this year after decades of being based in Germany.

But for now, those pieces of the 1st ID that are slated to enlarge the 173rd, such as the 1st Squadron, 4th U.S. Cavalry Regiment, will remain in Germany until there is room at Vicenza, King said.

There might be some movement of 173rd members to the brigade&#8217;s newly acquired parts in Germany, but King said USAREUR is working to keep such movements to a minimum. The 1-4 Cavalry is in the process of turning into a reconnaissance squadron for the 173rd.

While not ideal, he said, split-basing of brigades does happen.

As pieces of the evolving 173rd BCT grind into place, plans also are afoot for the kids.

A $45 million, 1,250-student elementary-middle school is included in the fiscal year 2007 presidential budget, said Steve Arn, a facilities engineer for the Department of Defense Dependents Schools. The new facility will be built at the Villagio housing complex near Caserma Ederle.

A new elementary school has been planned for a few years, but the decision to make the new building include a middle school came about from the Army&#8217;s transformation plans, Arn said.

If the budget is approved, groundbreaking would begin next year and completion would be expected by 2010, he said. A new high school is in the early stages of planning as well.

Additional housing is also on the horizon.

A lease-to-build program similar to that used in Aviano, Italy, will have Italian contractors build and own about 215 townhouse units that the U.S. government will lease, said Steve Lindell, chief of Vicenza&#8217;s housing division.

An independent housing analysis conducted in 2004 determined that Vicenza didn&#8217;t have enough dwellings to house soldiers and dependents.

At build-out, it is expected to accommodate the Vicenza community, although the gated housing also was a pre-transformation initiative, Lindell said.

Two developers are vying for the contract right now and one will be selected early this summer, Lindell said, with construction possibly starting as early as this fall. The housing will be situated within a 15-minute commute to Caserma Ederle and Tomasso Dal Molin, he said.