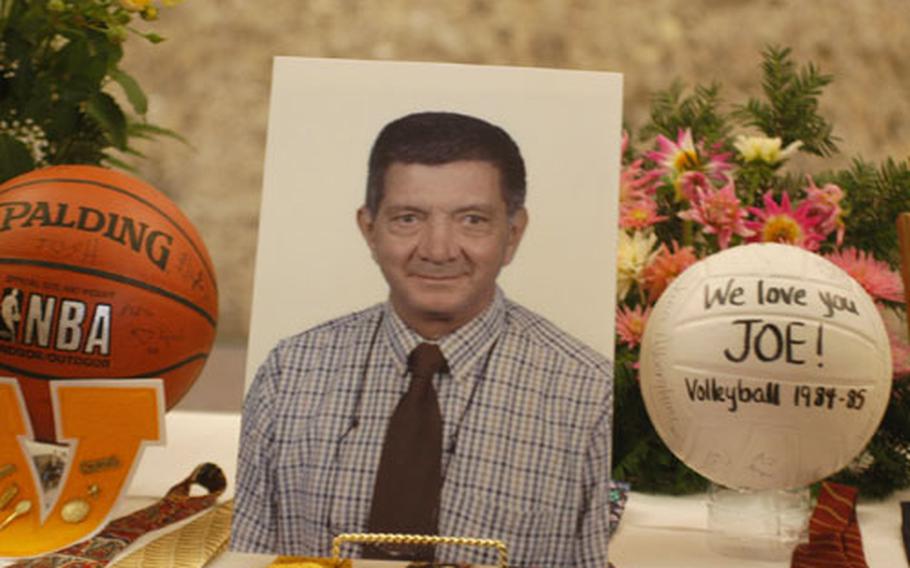 Joe Pellerito spent 40 years teaching students in Vicenza before suffering a fatal stroke last week. Outside the classroom, he also taught music and coached girls&#39; tennis, basketball and volleyball teams over the years. He was remembered by hundreds of people Tuesday in a memorial service. (Kent Harris / S&S)

VICENZA, Italy &#8212; There is no shortage of memories of Joe Pellerito.

The children, former colleagues and friends of the man who spent almost 40 years teaching in Vicenza shared some of theirs during a memorial service Tuesday for Pellerito, who died last week at 70 following a severe stroke.

&#8220;He was Vicenza Elementary School to me,&#8221; former colleague Mel Cann wrote in a note that was read aloud to the hundreds gathered in the base chapel.

There were the sixth-grade field trips to Florence, the annual Christmas concerts he organized, gentle corrections on the proper use of English, always picking up the check at restaurants &#8212; and overtipping the waiters at the same time.

He belted out Broadway music in the hallways of the school with longtime colleague Fred Benanti. He told jokes to his girls basketball and volleyball teams during timeouts to try to cheer them up when the score wasn&#8217;t in their favor.

A handful of the school&#8217;s current athletes wore their uniforms to the service. Coaches from other schools attended as well.

Other than a brief stint as principal in Rimini, he was in the community to stay.

Mullen said his friend&#8217;s list of contributions were numerous, but the complete scope would never be known.

Not that Pellerito wasn&#8217;t given any credit. Several colleagues praised him as a mentor during and after the service.

Mary, his wife of 44 years, sat in the front row. She was presented with a flag by the members of the VFW Post 8862. Pellerito, a veteran of the Korean War, met his wife while attending his hometown University of Detroit and taught in the area until moving to Europe in 1962.

Benanti, who related that conversation, said he had been looking forward to showing Pellerito some progress he&#8217;s made on the golf course.