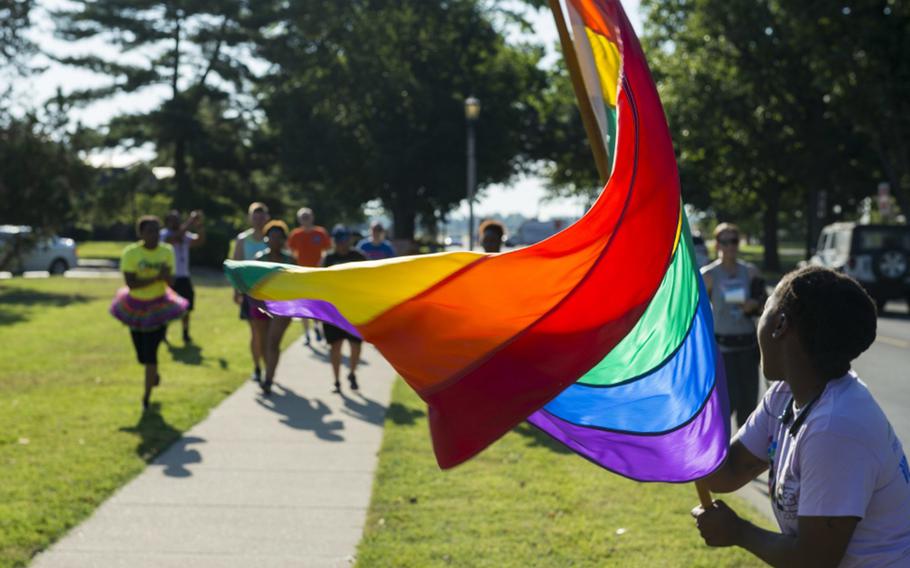 The June 7 event will feature talks by Stuart Milk, an activist for lesbian, gay bisexual and transgender rights, who has worked with LGBT movements all over the world and is himself gay. In 2009, he accepted the Presidential Medal of Freedom from President Barack Obama on behalf of his uncle, gay rights icon Harvey Milk — California’s first openly gay politician who was assassinated in 1978.

Stuart Milk will give three talks on Caserma Ederle — one at the high school for students who sign up, and one at the middle school, for eighth-graders whose parents will be advised in a letter that they may opt out. The third talk, open to the community, is scheduled for 3:30 p.m. at the Hall of Heroes auditorium.

Vicenza High School has a gay-straight alliance club called Born This Way, and the middle school has the similar Ally Club, which meets weekly and has about 18 regular attendees, all of whom have their parents’ blessing, said Michal Paul Turner, a Vicenza Middle School teacher, who was involved in organizing the community’s pride event.

“Our mission is to teach people to co-exist, without making stereotypes the frame of reference,” Turner said, and provide “a place where every student can feel safe, to have open conversations. Students have always had the market cornered on feeling like they don’t belong.”

Vicenza’s first-ever event resulted from a combination of factors. In January, then-Army Secretary Eric Fanning, the first openly gay service secretary, put out a directive telling senior commanders they “may but are not required to conduct Lesbian, Gay, Bisexual, and Transgender Pride Month activities.” The second factor was “one highly motivated civilian,” as Turner put it.

She was referring to Bert Gillott, a U.S. Army Africa protocol officer and conference planner who’s been a motivating force. Gillott said he’d long admired both Milks’ advocacy and that he also wanted to highlight Harvey Milk’s military service. “I wanted to recognize that Harvey Milk was a former naval officer — he does have military ties.”

Last year, the Navy announced that it would name one of its new class of oil tankers after Milk, who, keeping his sexual orientation secret, served in the Navy in 1951 as a diving officer during the Korean War.

It was illegal for gay and lesbian people to serve in the U.S. military until 1994, when the Clinton administration in a compromise instituted the so-called “don’t ask, don’t tell” policy. Gays and lesbians could serve, unless their sexual orientation was discovered; then they were discharged. The law changed to allow gays and lesbians to serve openly in 2011. The Pentagon ended its ban on openly transgender people serving in the military last year.

A significant number of servicemembers, particularly those older and more religious, are not supportive of LGBT issues. Only 28 percent of evangelical Christians in the U.S. supported same sex marriage, according to a 2014 Pew Research Center study, compared with more than 90 percent of atheists and agnostics, 84 percent of Buddhists and 42 percent of Muslims.

Some 40 percent of servicemembers identified as evangelical Christians, according to 2005 Defense Department statistics.

“But even within a conservative population, you’re hard-pressed to find someone who isn’t in favor of human rights,” Turner said. “I like to think our Army wants to defend all Americans.”

Gillott said that no LGBT parade, a staple of civilian LGBT pride events, would be held. But organizers were considering a “color run.” That’s a 5-kilometer run in which participants get doused in vibrantly colored cornstarch at every kilometer along the way.