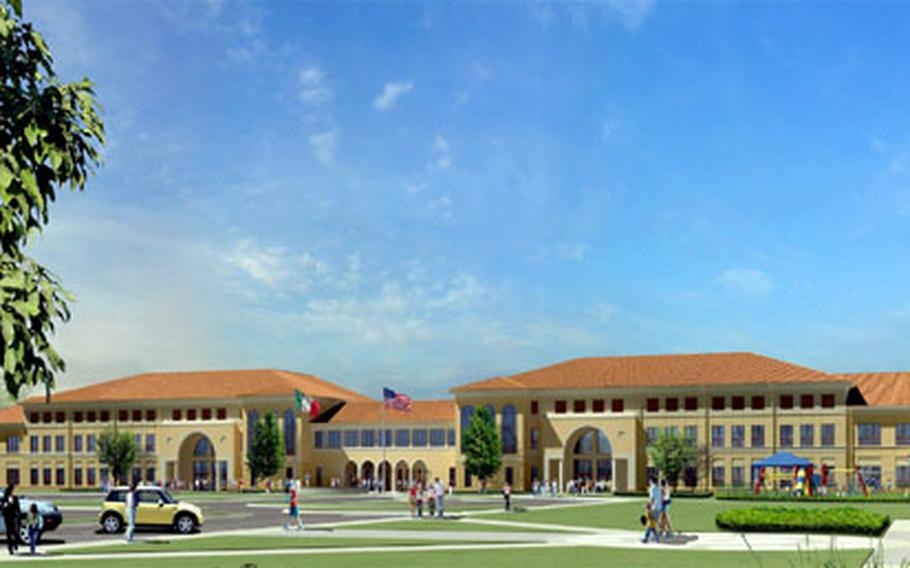 An artist&#39;s rendering shows the new elementary and middle schools that will be built in Vicenza, Italy&#39;s Villagio housing complex. (Courtesy of U.S. Army Garrison Vicenza)

VICENZA, Italy &#8212; The way military families move around the globe, not many of those present at Tuesday&#8217;s groundbreaking for new elementary and middle schools will be around to enjoy them when they open in 2010.

That included the keynote speaker, Maj. Gen. Frank Helmick, commander of the Southern European Task Force (Airborne), who surely will be stationed elsewhere by that time. Or Sam Menniti, assistant superintendent for the Department of Defense Dependents Schools Mediterranean District, who is heading to South Korea to take over the district there.

But that didn&#8217;t seem to bother the adults or the children on hand.

The 45 million-euro ($69 million) project will feature not only two new schools inside the Villagio housing complex, but a new child development center as well. The two-story, 150,000-square-foot elementary school is designed for as many as 1,050 students. The two-story, 57,000-square-foot middle school next door can handle as many as 270. The CDC building will have space for 198 preschool children and 150 school-age youngsters.

&#8220;It&#8217;s going to be a real quality facility,&#8221; said Menniti, whose office is currently next to the current school complex on Caserma Ederle. That building has been around since the 1950s.

To make way for the new schools, 100 housing units that occupy the space now will be demolished. The relocation of four battalions in Bamberg and Schweinfurt in Germany will bring more families to Vicenza and there isn&#8217;t any more space in the current schools.

Helmick said the facilities &#8220;symbolize the dedication we have for our Army families and communities. There is nothing more important to a soldier and the family than the education of their children.&#8221;

Menniti said there also are plans to build a high school near the site, but that project hasn&#8217;t received final approvals or funding.

Cooperativa Muratori Cementisti Ravenna, which is building a DODDS school in Sigonella, is handling the construction. Project coordinator Francesco De Simoni said there will be up to 150 workers on base during the peak part of construction.