Vicenza is tops in car care 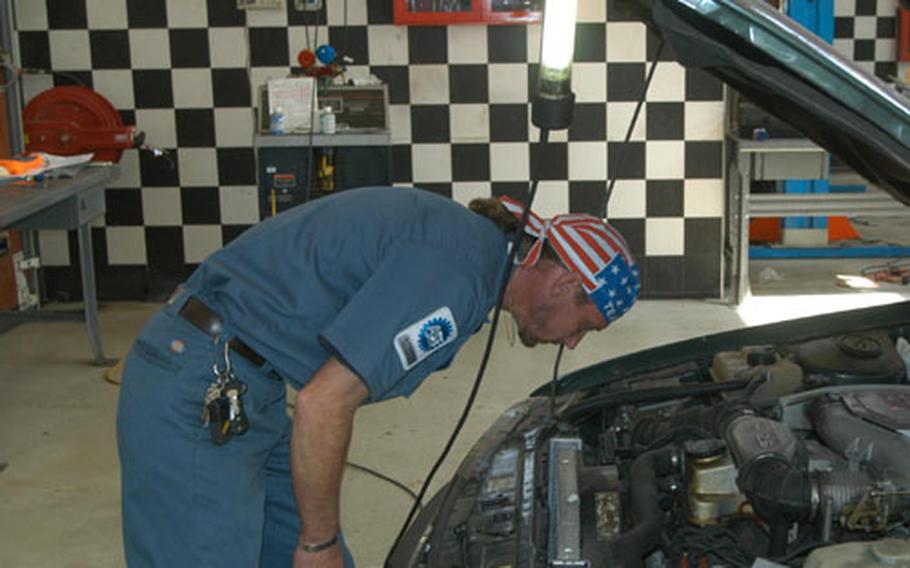 Howie Overacker, one of three employees at Vicenza&#39;s auto skills center, looks at a car brought into the shop Wednesday. The center has been selected as the Army&#39;s best medium-sized facility for 2004. (Kent Harris / S&S)

VICENZA, Italy &#8212; There&#8217;s only one calendar hanging in the office of the auto skills center at Caserma Ederle.

It has nature scenes.

And there aren&#8217;t any posters of scantily clad women, either.

Charlie DeCelle, who runs the center, says that stereotypical image of garages isn&#8217;t one that he wants to project. Besides, many of his customers would demand equal treatment.

The center went above and beyond the needs of the community in the last year and was recently rewarded for it.

Vicenza&#8217;s now home to the best medium-sized auto skills center in the Army, according to the MWR&#8217;s 2004 recreation awards.

Those customers have changed over the years and the center has tried to keep pace.

All three employees of the shop have taken several advanced training courses in car maintenance and the center boasts some expensive pieces of analytical equipment.

Much of that equipment doesn&#8217;t get handed out to customers.

So the employees handle it.

Most of the work is still done by the customers themselves, though.

The center got dozens of new customers during the 173rd Airborne Brigade&#8217;s deployment to Iraq.

DeCelle taught a series of free classes in auto maintenance to spouses and the center stepped up its efforts to keep their cars in good shape.

It also was instrumental in the base&#8217;s massive efforts to put new license plates on all the vehicles registered in Vicenza. About 2,000 cars went through the shop in a two-week period.

The medium-sized category designation is based on the customers on base, not the number of employees. Fort Rucker, Ala., took the large-sized category. No small-sized winner was announced.