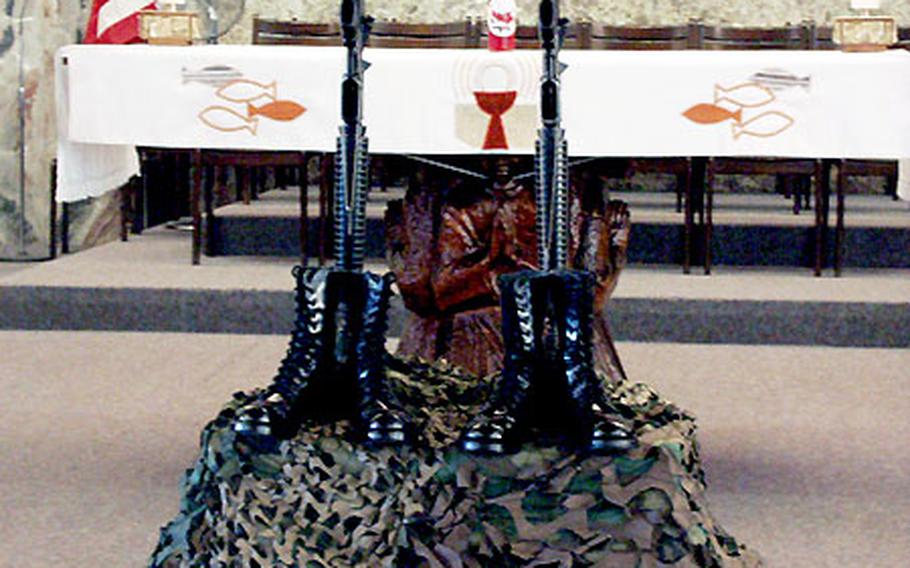 The boots and berets of two paratroops from the 173rd Airborne Brigade were set before the base chapel altar Wednesday for a memorial service at Caserma Ederle in Vicenza, Italy. First Lt. David R. Bernstein and Pfc. John D. Hart were killed Oct. 18 in an ambush in Iraq. (Kent Harris / S&S)

First Lt. David R. Bernstein and Pfc. John D. Hart were remembered by fellow paratroops, friends and community members in a memorial service at the base&#8217;s chapel. The two soldiers from Company C, 1st Battalion, 508th Infantry Regiment were killed Oct. 18 during an ambush in Taza.

Bernstein, 24, was awarded his commission in June 2001 after graduating from the U.S. Military Academy at West Point. Sgt. 1st Class Frank Lauer said he has worked with a lot of fresh lieutenants over his career, but Bernstein was different.

Lauer said he served as Bernstein&#8217;s platoon sergeant for 15 months.

Bernstein was awarded the Silver Star Medal for his efforts during the ambush.

Hart died a month after celebrating his 20th birthday. He had joined the Army only a year earlier on his birthday.

Pfc. Carl Kazanchy recalled pulling a long security detail with Hart in Iraq during which they tried to keep each other alert by talking about &#8220;other things besides that Iraq was hot and dirty.&#8221;

He said Hart had an infectious personality.