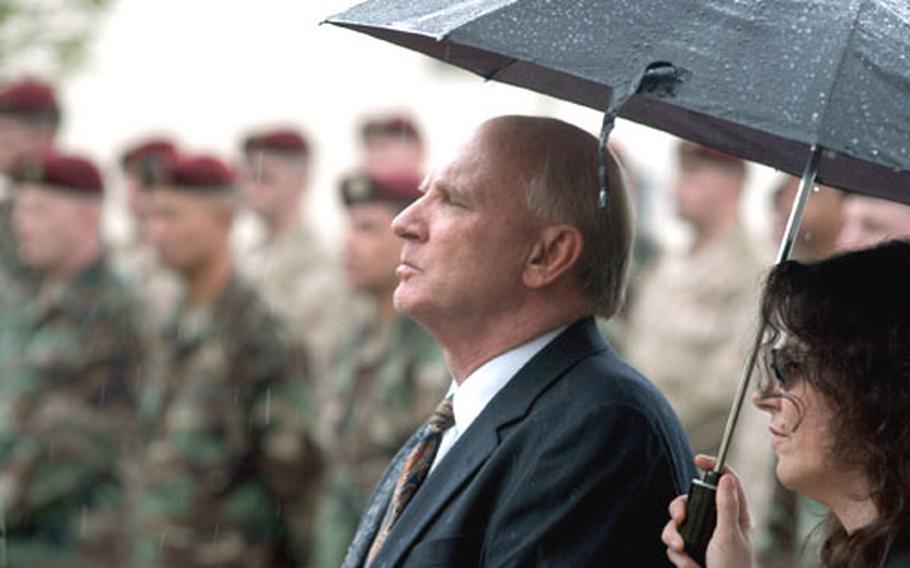 Steve Lindell and Rafaella Kilgore listen to a base chaplain over a loudspeaker in the parking lot of the Vicenza chapel during Tuesday&#39;s memorial service. About 100 soldiers and community members listened to the service outside in the rain because the chapel filled to capacity. (Russ Rizzo / S&S)

VICENZA, Italy &#8212; They stood solemnly outside as the words played through a loudspeaker.

About a hundred men and women in Army green and others in suits and dresses listened outside the base chapel Tuesday afternoon as people inside recalled stories of four soldiers lost to a helicopter crash in Afghanistan nearly two weeks ago.

A crowd of about 400 soldiers and members of the Vicenza community had filled the chapel to capacity for the memorial service, so the rest of the mourners stood on the black asphalt of the parking lot looking at the speaker placed just outside the chapel door.

They listened as a friend remembered Cpl. Sascha Struble&#8217;s &#8220;charisma of a rock star,&#8221; and another told how Staff Sgt. Romanes L. Woodard was quiet but always there to lend an ear.

When a light rain began as a base chaplain read a letter from local Italians remembering their neighbor Maj. Edward J. Murphy &#8212; or &#8220;Eduardo,&#8221; as they called him &#8212; the group outside remained, few with the cover of an umbrella.

Inside, a standing-room-only crowd let out a collective gasp as Spc. Burton Holloway told them that Cpl. Daniel Freeman volunteered to take his place on that ill-fated flight to keep him from working 30 hours straight.

Freeman, Murphy, Woodard and Struble died when a CH-47 Chinook helicopter crashed during a sandstorm in Afghanistan on April 6. Fourteen others died in the crash, including five crewmembers based in Giebelstadt, Germany, one Marine, three civilian contractors and a mix of soldiers from Army Reserve and National Guard units.

Gen. B.B. Bell, commander of U.S. Army Europe, sat among family members of the fallen soldiers, about a dozen white-shirted members of a local Veterans of Foreign Wars chapter, dozens of Murphy&#8217;s Italian neighbors and other members of the Vicenza community. They sat in pews under blue stained-glass windows that line the chapel and listened as soldiers and chaplains spoke next to enlarged photos of the four soldiers that were placed behind their helmets, guns and boots.

Maj. Sam Williams, a fellow signal officer with the Southern European Task Force, recounted a night in Afghanistan when Murphy, his &#8220;battle buddy,&#8221; rushed to put on his Kevlar vest after two rocket attacks near Bagram Air Base. Williams froze, and Murphy stayed behind to make sure he got to the bunker safely, he said.

He also recalled a night when Murphy spent hours painting part of his collection of miniature toy soldiers and teaching him about the Civil War.

Murphy was 36 years old. He is survived by his wife, Barclay, and three children.

Spc. Nathan Torrence, a fellow member of the 1st Battalion, 508th Infantry Regiment, told the crowd that Woodard stayed behind the scenes in his maintenance platoon and felt a tangible love for his daughter, 6-year-old Ebony. Woodard was 30 years old.

Capt. James Ewing, a member of the office of the judge advocate in Vicenza, recalled how Struble, a paralegal attached to the 1st Battalion, 508th Infantry Regiment, was both the &#8220;life of the party&#8221; and a &#8220;deadly serious paratrooper.&#8221; Struble was 20 years old.