Vicenza-based troops in Afghanistan aggressively taking fight to the enemy 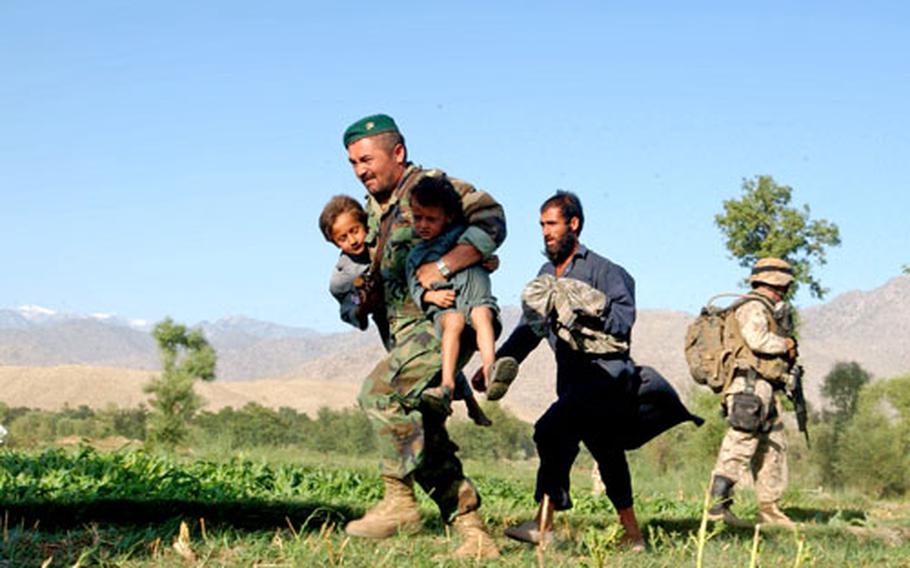 An Afghan army soldier rushes children to a waiting helicopter on June 23 in Lagham Province, Afghanistan. More than 119 people were stranded by the rising flood waters of the Indus River in the province. Soldiers from the Afghan army, as well as coalition troops and aid agencies worked together for the rescue operation when a dam upstream broke. (Ken Denny / U.S. Army)

Despite a recent spate of attacks on U.S. forces, Afghanistan is not degenerating into an Iraq-like atmosphere, according to the deputy commander of Combined/Joint Task Force-76.

But there are similarities, he acknowledged.

Foreign fighters in the countries are bent on hitting U.S. and local government forces hard, but Champion said the recent surge in fighting could be attributed more to American aggressiveness than anything al-Qaida is doing.

When the Southern European Task Force (Airborne) from Vicenza, Italy, took over the mission in March, &#8220;we certainly had a plan to go more in areas that had not been visited by coalition forces for a while,&#8221; he said.

So American forces, along with Afghan police and army counterparts, have launched a series of operations in areas where U.S. presence has been minimal or nonexistent.

New forward operating bases have been set up, and American troops have generally spread out away from established bases, he said.

Since SETAF took over from the 25th Infantry Division, 33 U.S. servicemembers have died in Afghanistan.

The number of those seriously wounded was unavailable.

The Americans return fire, call in air support and then search for survivors, he said.

The mountainous terrain of Afghanistan allows small groups to launch ambushes and then disappear.

The Russians discovered that in the 1980s.

But U.S. military officials maintain that they, unlike the Russians, have the support of the majority of the people.

They say many recent raids and discoveries of arms caches have come after tips from locals.

In fact, Champion and others say that they expect the fighting to continue and possibly increase before the provincial and parliamentary elections Sept. 18.

He said anti-coalition forces would suffer &#8220;another blow&#8221; with a successful election.

And hundreds of more Afghan police and servicemembers &#8212; praised by U.S. commanders in their work in several recent operations &#8212; will be working around the country.