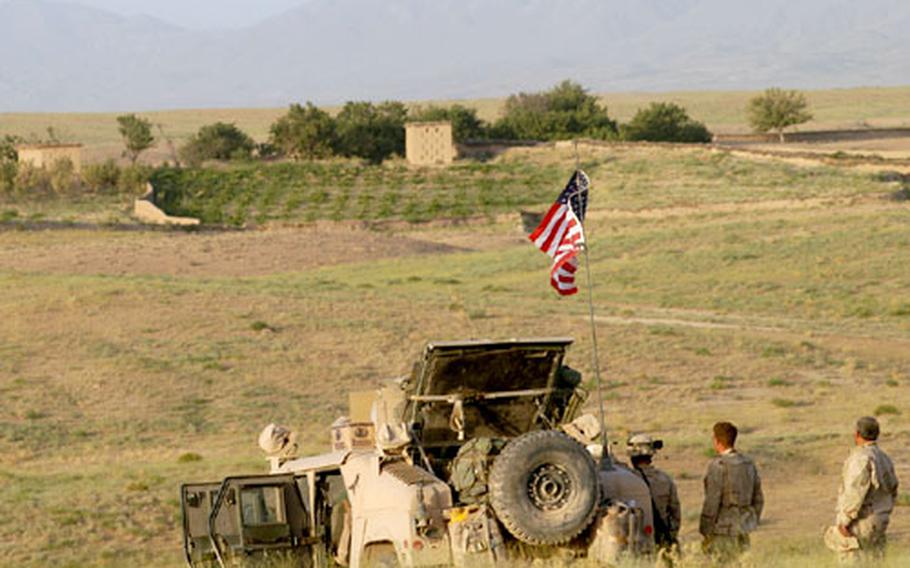 Soldiers from Company A, 2nd Battalion (Airborne), 503rd Infantry Regiment look from their hilltop patrol base toward a village in Afghanistan’s Surri District as they set up defenses for the night. Intelligence later said that Taliban fighters moved a machine gun into the village, which was less than 1,000 yards away, to attack the small group of troops on the hill. (Jason Chudy / S&S)

ON A HILLTOP IN ZABOL PROVINCE, Afghanistan &#8212; It was a poker match, pure and simple. Two players, a couple of cards showing, the rest held close to the vest but ready for play.

Only the two players were the U.S. Army, represented by a dozen or so soldiers mainly from the Vicenza, Italy-based Company A, 2nd Battalion (Airborne), 503rd Infantry Regiment, and an unknown number of Taliban fighters.

And the stakes were measured not in poker chips, but in human lives.

The Americans were in the area as part of Operation Surri Sweep, trying to break up enemy teams who were placing bombs and mines on area roads.

This evening, the Army brought to the table a relatively ragtag outfit of mortarmen, two Air Force combat air controllers, an intelligence gathering team, a couple of infantrymen, some Afghan translators and a Stars and Stripes reporter, although the enemy could only see men with weapons.

The Army dealt first. Five Humvees and the above mentioned troops set up in a loose circle on a small hill near an Afghan village. The soldiers didn&#8217;t have any heavy weapons, but did have a 60 mm mortar.

As the sun set, the soldiers prepared their defense, drawing terrain maps and mapping distances to likely enemy avenues of approach, then checking to ensure that if the enemy attacked everyone had enough ammunition to last for at least a couple of hours until help could arrive.

So the soldiers basically had a pair of deuces showing. Not enough to beat a good hand, but enough to drive out anyone who didn&#8217;t have a pair.

The Taliban played next. Intelligence said they had the Army&#8217;s hill surrounded, but because of the low, rolling hills in the area covered only by ankle-high scrub grass, &#8220;surrounded&#8221; wasn&#8217;t necessarily the right term.

Had the Humvees packed up and driven off, most likely they wouldn&#8217;t have encountered any enemy.

The Taliban upped the ante when reports came in that five fighters had moved a machine gun into a village less than 1,000 yards away. That gave them at least a pair of deuces, too.

But the Army&#8217;s deuces were on the table for the Taliban to see. The Army was bluffing, trying to make the other guy think that they didn&#8217;t have anything else in their hand.

The Army element moved locations to another hillside in attempt to, at best, catch the enemy off guard and force them to regroup and replan. But, it wasn&#8217;t enough to cause the enemy to throw their cards on the table and walk away.

But in addition to its deuces, the Army was also holding a pair of aces &#8212; aircraft and artillery, or in this case a mortar. The mortar was showing, but the Army&#8217;s ace-in-the-hole was aircraft, ready to be called out at a moment&#8217;s notice.

The aircraft wouldn&#8217;t get there right as the enemy attacked, but the soldiers expected they could hold out until it did arrive.

So that&#8217;s the way the table played, each side dropping a little more into the pot until something had to give.

But instead of the hand playing to a close, an outside source intervened. Another platoon from Company A was a few kilometers away, marching to another objective. The Taliban saw them.

Thinking that the troops were coming after them, they took the safe route, threw their cards, face down, on the table and walked away into the darkness.

Only the Army didn&#8217;t learn this until much later. Intelligence eventually reported that had the other platoon not spooked the Taliban, they would have attacked &#8212; the Taliban fighters, it seems, were sure they could beat that pair of deuces, and possibly work quickly enough to overcome the aces.

But they never got the chance. In the morning, the Army loaded into their Humvees, moved to a different hilltop and set up a similar card game.

But from that night on, until the completion of the operation several days later, the Army was playing alone.