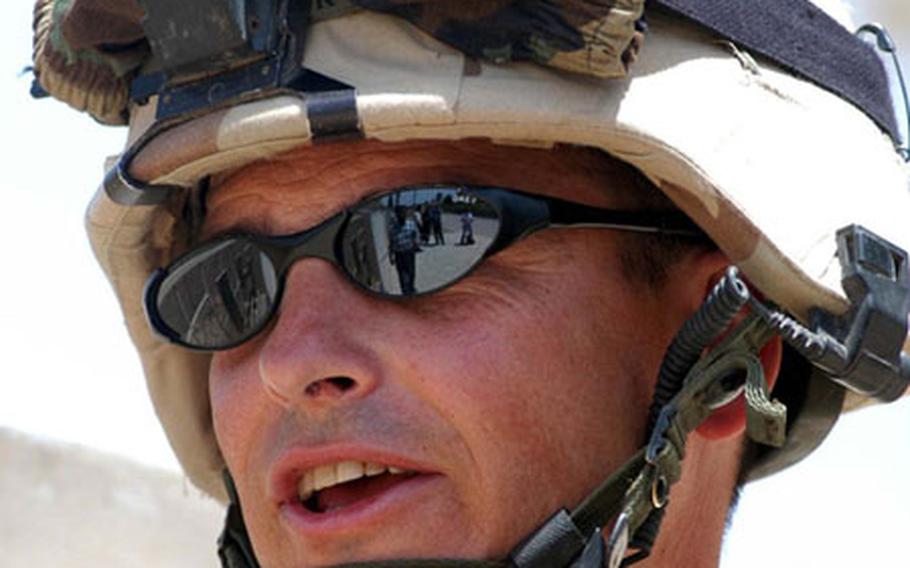 Sgt. Troy Ezernack in Iraq in May 2003. A memorial service was held Friday in Vicenza, Italy, for the popular sergeant, who was killed Oct. 9 in a skirmish with insurgents in Iraq. (Michael Abrams / S&S)

Soldiers, family and friends remembered an Italy-based soldier killed in Afghanistan as a &#8220;man of great words&#8221; and &#8220;relentless devotion&#8221; Friday at a Vicenza memorial service.

Staff Sgt. Troy S. Ezernack was killed Oct. 9 during a skirmish with insurgents near Qalat. He and other members of Company A, 2nd Battalion, 503rd Infantry Regiment had stormed a building and then been attacked with grenades.

At Friday&#8217;s memorial service, fellow soldiers eulogized him as a leader who &#8220;inspired and mentored countless soldiers.&#8221;

&#8220;His technical and tactical proficiency surpassed that of many of his peers,&#8221; said Staff Sgt. Jason Harding, a platoon mate of Ezernack&#8217;s. &#8220;Whenever I had a problem or a question about my job, I could always depend on him to give me the right answer.

Ezernack was a poet, writer and pastor, friends said. The 39-year-old had spent eight years as pastor of Trinity Baptist Church in Lancaster County, Pa., before enlisting in the Army. Last week, when news of his death reached the church, a special vigil was held.

During a 2003 deployment to Kirkuk, Iraq, Ezernack told Stars and Stripes he was proud of his mission, though for practical reasons as well as political.