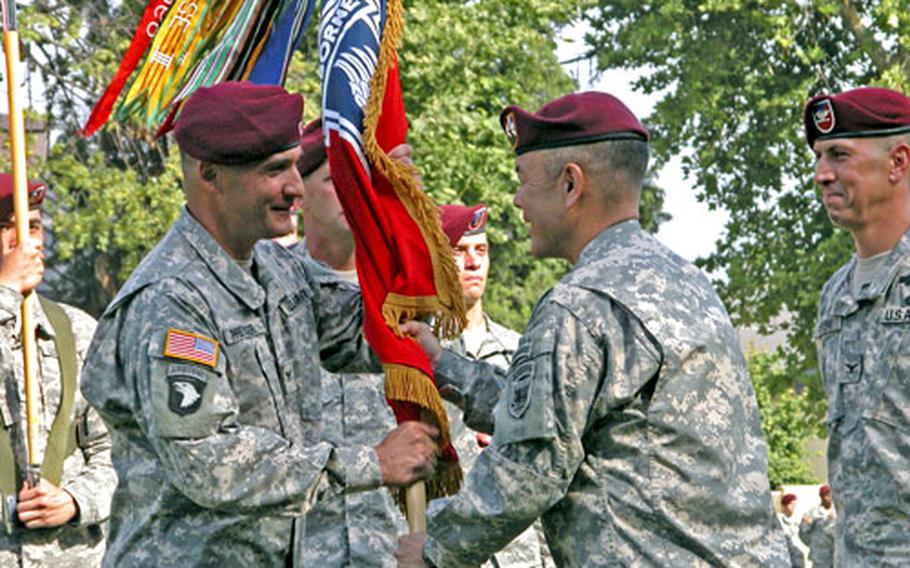 With just a hint of melancholy, Owens passed the brigade colors on to Col. Charles Preysler, whom he called an old friend.

During his address to the soldiers, Owens recounted moments of valor, courage and selflessness during the brigade&#8217;s deployment to Afghanistan, where it constituted a part of Combined Joint Task Force-76, led by the Vicenza-based Southern European Task Force (Airborne).

Sky Soldiers demonstrated a detached, calculated nature when danger was near, leavening that with compassion when needed, Owens said. &#8220;Give them any task, and paratroopers will figure it out,&#8221; he said.

As units added recently through Army transformation stood side by side with other Sky Soldier components, Preysler praised the brigade as &#8220;awesome.&#8221;

&#8220;You Sky Soldiers should rightfully be proud of your many victories,&#8221; said Preysler, who comes to the 173rd after a stint at SETAF as chief of operations. During that time, he deployed with CJTF-76 to Afghanistan.

Kamiya said Owens will be an asset at Fort Polk, La., where Owens will serve as commander of the operations group for the Joint Readiness Training Center.

&#8220;The Army has demonstrated great confidence in Kevin by placing him there,&#8221; Kamiya said.