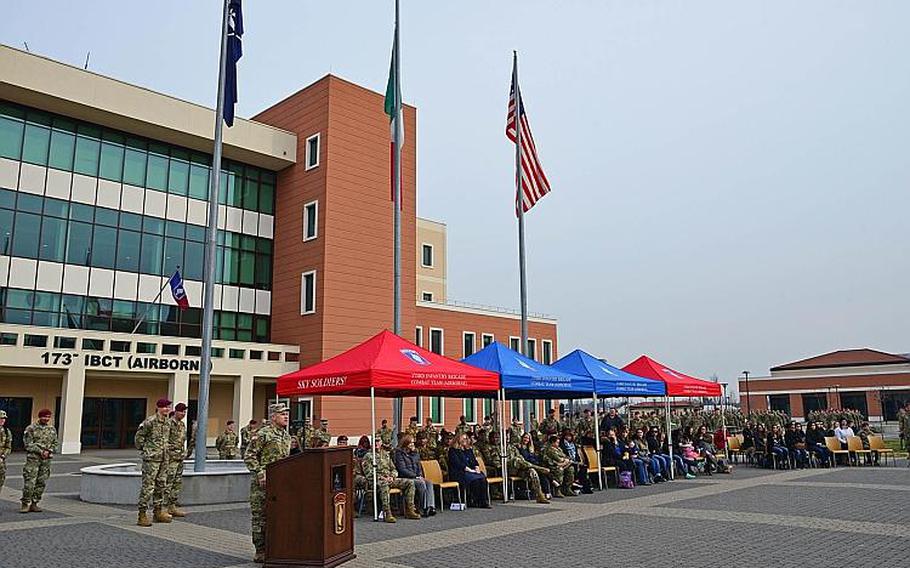 VICENZA, Italy — Respondents to a survey at the Army garrison here see unemployment and lost career opportunities as the top social problems, according to a recent survey.

More than 67 percent of the 685 people who took the survey on quality of life at U.S. Army Garrison Italy identified these issues as a major concern — findings that largely correspond with national surveys on military families.

“Work-life” imbalance drew the second-most responses by nearly 51 percent, followed closely by financial issues, according to the survey.

Most of the respondents — more than 60 percent — were women, and more than 40 percent were family members. The majority were in their 20s and 30s with college degrees, two cars and one or more children.

More than half of respondents said deployments and training caused family problems. And more than a third checked off infidelity as one of the garrison’s family problems.

The idea of the survey was to get a sense of what the community needed, in order to guide “how best to take limited resources and apply them to make a better community,” said Col. Erik Berdy, garrison commander, at a town hall meeting earlier this month.

The 50-question survey, said to be the first one presented by the garrison, was offered from Jan. 8 to Feb. 8. Officials reached out on social media, in the base newspaper and other outlets, offering free lunches and prizes to draw responses from the population of some 15,000 soldiers, civilians, family members and retirees. Family members are the largest component, with about 5,800 attached to the garrison as of last year, compared to about 3,800 personnel on active duty.

The respondents identified a host of health concerns — alcohol and tobacco use, stress, depression and toxic leadership. And the majority said they’d discuss their problems with a friend rather than a counselor or the chain of command.

Only 6 percent listed “engaged senior leaders” as a strength of the installation.

Some concerns listed by participants may be difficult to address. For instance, the garrison can’t change training and deployment schedules or provide more appointments at the health center or dental clinic, which fall under different commands.

Unemployment and underemployment are top problems for military spouses worldwide, according to a 2017 survey by the U.S. Chamber of Commerce Foundation.

Military spouses, more than 92 percent of whom are women, sacrifice their careers to frequent moves, often to installations outside urban areas with few employment opportunities.

Almost half of spouses are unemployed and many of the employed said they worked part-time or seasonally, although they’d prefer full-time work, according to the national survey. They said that a lack of two incomes caused stress and financial difficulty.

Military spouses are more highly educated than the general U.S. working population, the survey found. More than two-thirds said that their skills and education were not being utilized.

Employment for spouses in Italy is especially difficult. It is governed by the status of forces agreement between the U.S. and Italy, which is much more restrictive than in Germany and many other countries. Family members must relinquish their SOFA privileges to obtain an Italian work permit, which denies them access to many base facilities and makes them subject to Italian taxes and legal jurisdiction.

There is no pending renegotiation of the SOFA.

But Berdy said that garrison officials had made a trip to Rome to “formally engage” with U.S. and Italian SOFA counterparts to ask that the rules be less restrictive. “They’re fully aware of our position,” Berdy said.