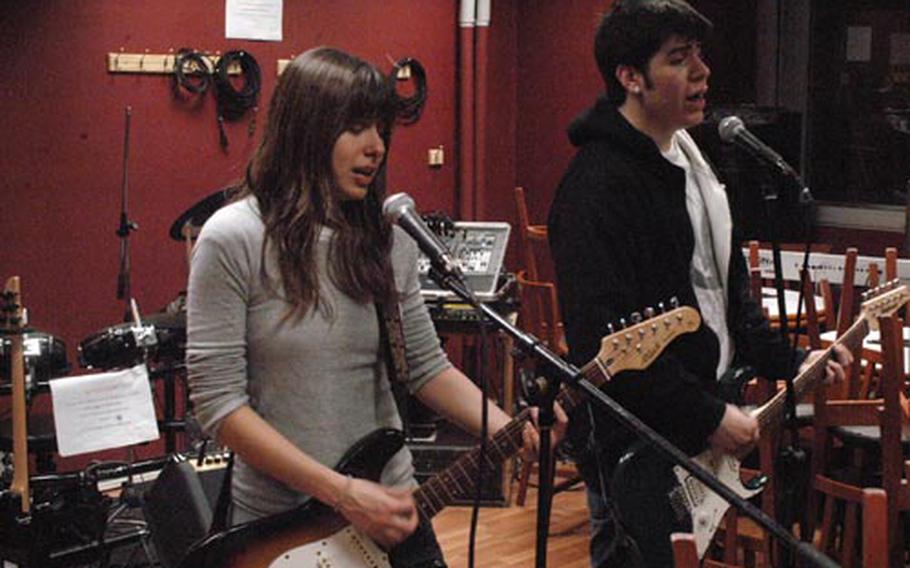 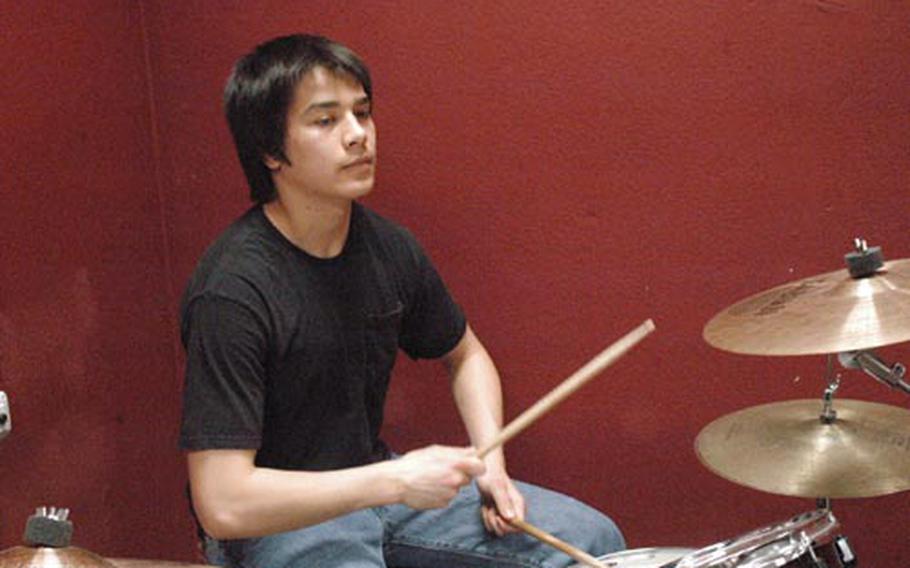 David Hunt, who plays drums, is the only band member without a microphone – though that might be changing. (Kent Harris / S&S)

Karla Bernasconi, Gabriel Sanchez and David Hunt have a little more than homework to deal with after school these days. The 16-year-old Americans, juniors at the high school on base, are rehearsing every day in the hopes of doing well in an international talent contest.

The band they&#8217;ve formed &#8212; An Orange Factory &#8212; made it out of the preliminary round of the Emergenza Festival, a global competition for emerging musicians featuring hundreds of concerts in dozens of locations around the globe over the next several months.

An Orange Factory was one of four bands to advance from a preliminary round in Padova to the second round. The three teenagers take the stage again March 30 at the Banale club in Padova to see if they can continue to advance.

During the early rounds of the competition, audience members determine who advances simply by raising a hand after each band finishes performing.

So having a lot of friends in the audience helps. And that doesn&#8217;t bode well for a trio of American teens scheduled to perform off base at midnight on a school night in a city 20 miles away from where they&#8217;re based. So anyone based in Vicenza or Aviano who feels like checking out some music &#8230;

Just getting the chance to perform in front of a large crowd would have been beyond the teens&#8217; imaginations just a few months ago.

Bernasconi took up the guitar about five years ago while in junior high.

"I thought playing guitar was cool," she said. "So I learned how to play."

Her family moved to Vicenza her freshman year. She wrote some songs and performed and recorded them. Then she posted them on MySpace. That&#8217;s where concert organizers ran across them. They contacted her and invited her to perform in the nearest venue.

Event rules require a minimum of three performers, so Bernasconi asked around school about anyone interested in joining a band. Sanchez, who has been playing the guitar for a few years, and Hunt, who has been on the drums for the same amount of time, stepped forward.

Sanchez said he agreed to the idea before even hearing Bernasconi&#8217;s music.

"We knew each other and we knew we each played instruments, but we really hadn&#8217;t thought of a band," Bernasconi said.

But they practiced half a dozen songs and went to the initial round of competition in December. Bernasconi played three original songs, then invited her bandmates onto the stage. They played five cover versions and won enough support from the crowd to reach the next round.

"You guys were so nervous before that show," Bernasconi says to her friends.

And why not? It was their first time performing together as a band.

"We figured it would be a good idea to play some songs that Italians would recognize and like," Hunt said of the choice of cover songs.

Sanchez scoffs at the idea of playing a lot of pop songs, but he grins sheepishly while Bernasconi kids him and Hunt about their tendency to play "Harry Potter" riffs in the breaks between the songs they&#8217;re working on.

They&#8217;re currently practicing each day in a small soundproof room in the Soldiers&#8217; Theatre on base. Half the room is filled with chairs and equipment, but they&#8217;re not complaining. They first practiced in Sanchez&#8217;s room.