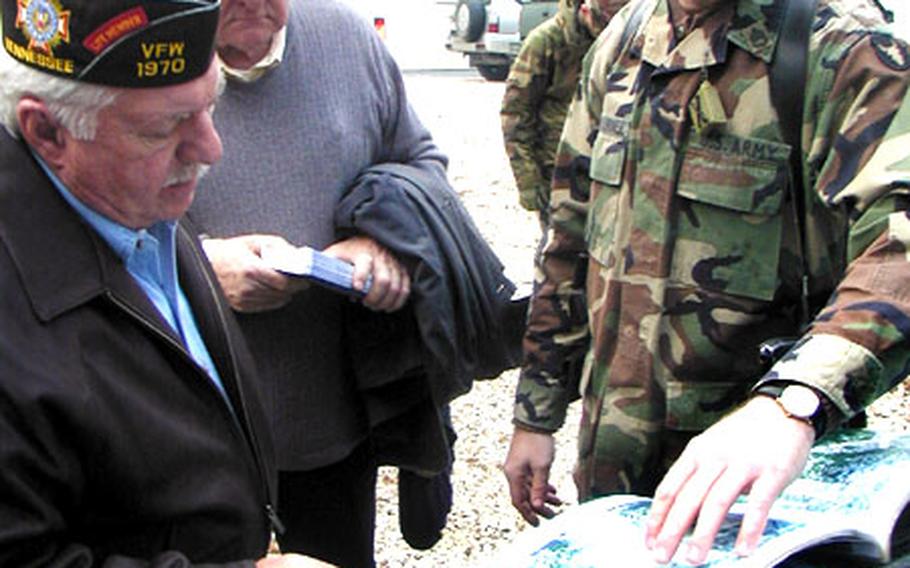 EAGLE BASE, Bosnia and Herzegovina &#8212; When John Furgess returned from Vietnam 30 years ago, no one waved flags when he got off the bus in his hometown of Nashville.

Furgess visited troops to support them on Veterans Day and to recruit new VFW members, something the organization needs now that the average age of its 2 million members is 65 years old.

At Veterans Day services at Eagle Base and at Camp Bondsteel in Kosovo, Furgess reminded the deployed troops, mostly National Guard members, that they should never forget where they were this Nov. 11.

&#8220;When you go home, you will never feel the way you feel today. This experience has shaped you, and it will shape your friends and family forever,&#8221; he said.

Support for Veterans Day isn&#8217;t as strong as it had once been, Furgess said, but troops shouldn&#8217;t be discouraged.

As part of their drive to get new members, Furgess and Andrew distributed hundreds of prepaid telephone calling cards to troops.

Enclosed with the cards were VFW membership applications that offer the troops a one-year free membership.

The VFW has more stringent requirements than other veterans groups, most notably the American Legion, and specifies that a member had to serve overseas in a combat situation.

The VFW also runs a political action committee and is active in lobbying Congress for benefits and funding that might otherwise be forgotten, the veterans said.

During the whirlwind Balkans tour, the VFW representatives met with commanding generals, toured bases and went on patrols. Everywhere they went, the duo talked to troops about their deployments.

To illustrated how the VFW boosted his personal morale when a young man, Furgess repeats a story about a fruitcake.

Furgess was a first lieutenant with his squad on Christmas Eve 1967 in Vietnam. He had received a parcel in the mail. The return address was &#8220;VFW.&#8221;

Inside was a fruitcake that had been sent by the VFW chapter of Furgess&#8217; hometown, Nashville. Furgess pulled out his bayonet and sliced the cake for his fellow soldiers and himself.