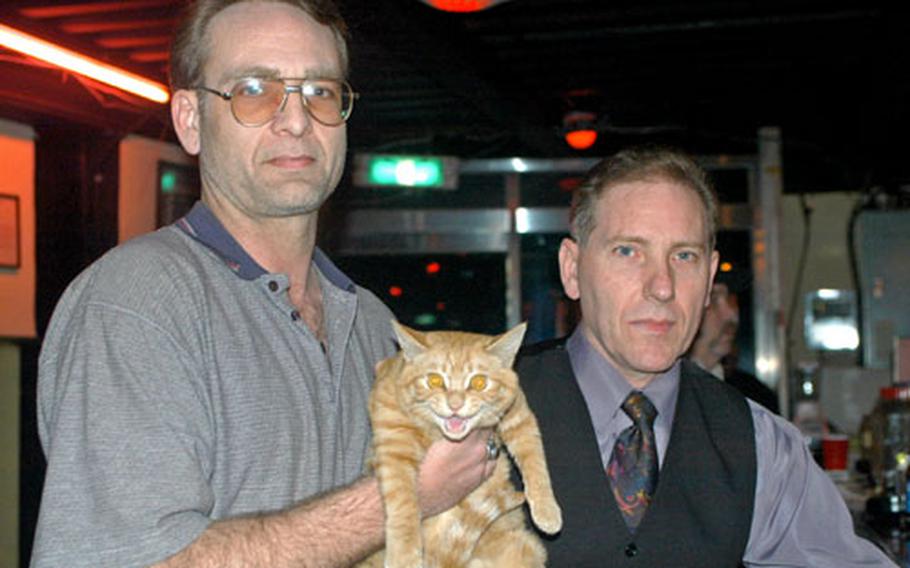 VFW members Doug Tucker, left, Garfield and Dennis Riehley at the Tongduchoen VFW club. Garfield, an orange striped cat who recently saw action in South Korea, is a club regular. VFW members would like Camp Casey soldiers to use the VFW as an alternative to off-base bars. (Seth Robson / S&S)

TONGDUCHOEN, South Korea &#8212; The Army should encourage soldiers to party at Veterans of Foreign Wars clubs, something that would help keep them away from trouble at South Korean bars, say patrons at the Tongduchoen VFW club.

VFW junior vice commander Dennis Riehley, who works as a contractor at Camp Casey, said Army leaders in Area I should tell soldiers about the club.

The Army recently announced plans for more than $1 million of improvements to on-post clubs in Area I.

Plans to improve on-post clubs are fine but there are times when a soldier wants to get away from work, Riehley said.

While VFW clubs in the United States report sharply declining memberships as more and more World War II veterans pass away, the Tongduchoen VFW has had a strong membership since it was formed in 1980, Tucker said, adding that some of the original members still drink there.

The criterion for membership is service in war overseas. Service in South Korea counts since technically there is still a state of war.

For active-duty soldiers, VFW membership costs $10. For retirees, the fees are $25 a year. The VFW club here, which is &#8220;the most forward-deployed VFW in the world,&#8221; celebrated its grand reopening in August.

Today the VFW club occupies only a third of the building. Upstairs rooms are used for storage and the American Steel Motorcycle Club meets in what used to be a slot machine room, he said.

Every VFW post has a canteen where members can relax, drink beer and talk. The Tongduchoen club includes a ballroom with a stage where the house band &#8212; Aleister Wild &#8212; plays, a bar and a billiards room, Tucker said.

Many of the VFW club staff are the wives of U.S. soldiers or civilians, Tucker said. Nonmembers are welcome at the club, he added.

The VFW club has nothing do to with the Korean Special Tourist Association &#8212; a group that represents bar owners in Tongduchoen, he added.

&#8220;It [the VFW club] is where most of the American civilians get together and bond. A lot of people find jobs here by getting to know each other,&#8221; he said.