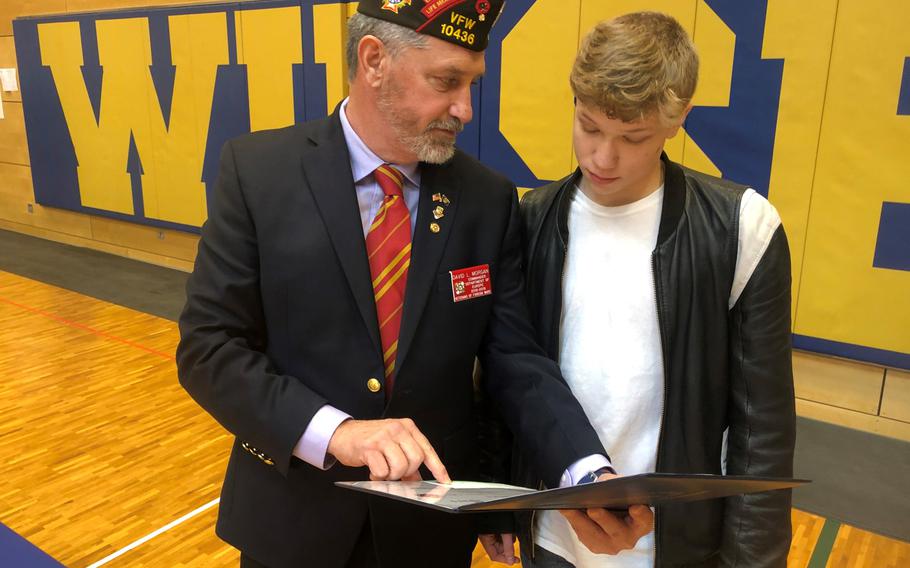 David Morgan, the European district commander for the Veterans of Foreign Wars, awards Eoin Oravetz, a senior at Wiesbaden High School, scholarship checks and certificates on behalf of the VFW at Hainerberg Kaserne, Feb. 14, 2019. (AARON KNOWLES/STARS AND STRIPES)

WIESBADEN, Germany — Though he’s never lived in the United States or voted in an election, Eoin Oravetz earned more than $1,000 in scholarships and a trip to Washington from the Veterans of Foreign Wars at Hainerberg Kaserne for his essay on “why my vote matters.”

David Morgan, European district commander for the VFW, presented the certificates and scholarships to Oravetz, 17, a senior at Wiesbaden High School, during a pep rally at the school Thursday. His audio-recorded essay was chosen from more than 50 student writers across Europe who competed in the VFW’s Voice of Democracy essay program.

“Eoin had a lot of compassion and it was obvious that he put in a lot of work and effort and did a lot of research for his essay,” said Morgan.

Because of Oravetz’s parents’ military service and current contracting jobs, he has lived his whole life overseas.

The approaching opportunity to vote is a monumental event, he said.

“It is such an important topic for us living overseas,” Oravetz said. “I just poured in what I felt about what voting means to me. Voting is the ability to have an actual say in what your nation does and even living overseas, it is essential to democracy.”

The VFW’s mission is to create better citizens and in turn, better leaders for future generations, Morgan said. The essay competition has been around for more than 70 years, and though its topic changes annually, it’s always patriotic, he said.

“The intent demonstrates how to honor and show compassion to our fellow man and country,” Morgan said.

Created in 1947, the essay contest draws entries from about 40,000 American high school students from the U.S. and its territories annually, the VFW’s website says. The first-place winner at the VFW department or state level wins at least $1,000 and an expenses-paid trip to compete at the national level.

Oravetz will travel with Morgan to Washington in March to compete for the top prize of $30,000 in scholarship money. Other national scholarships range from $1,000 to $16,000.

The winners from each state will have their recorded essay posted on the VFW’s website at www.vfw.org.