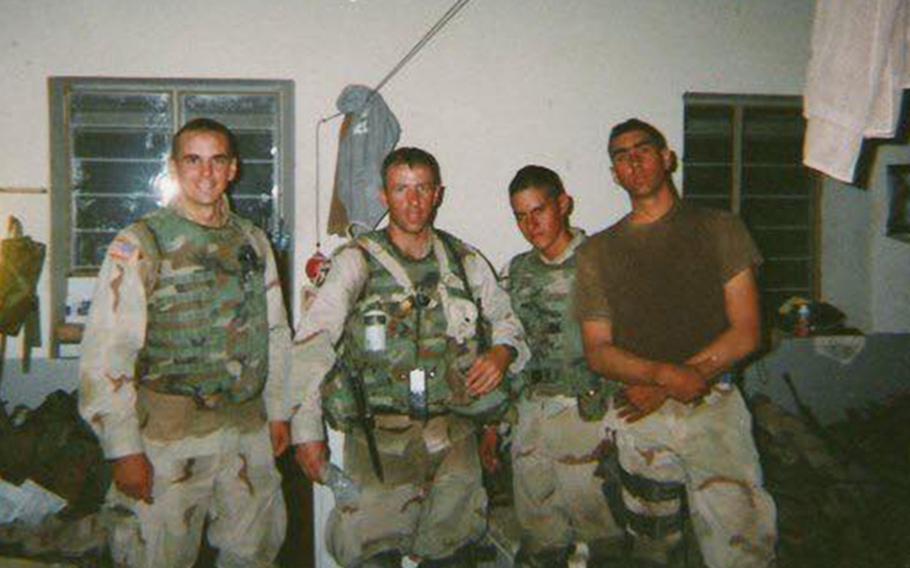 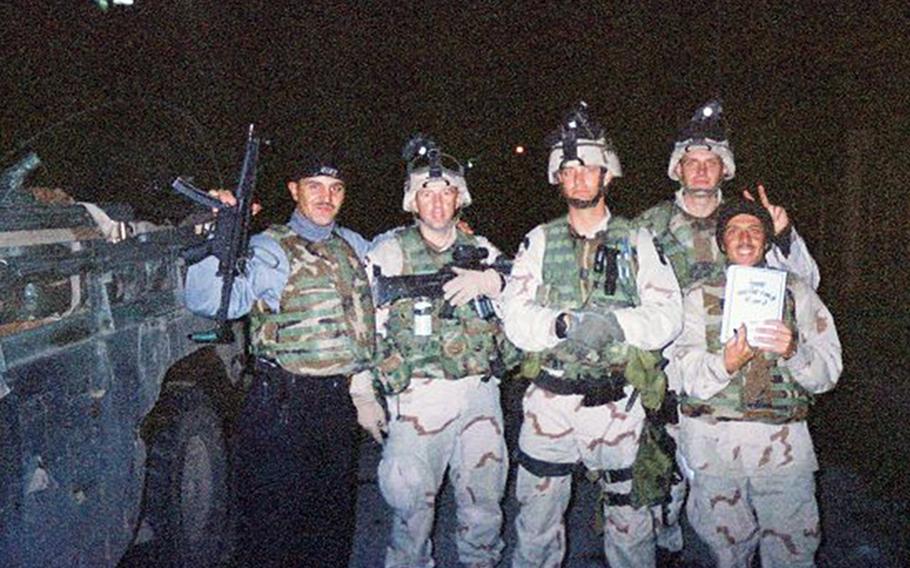 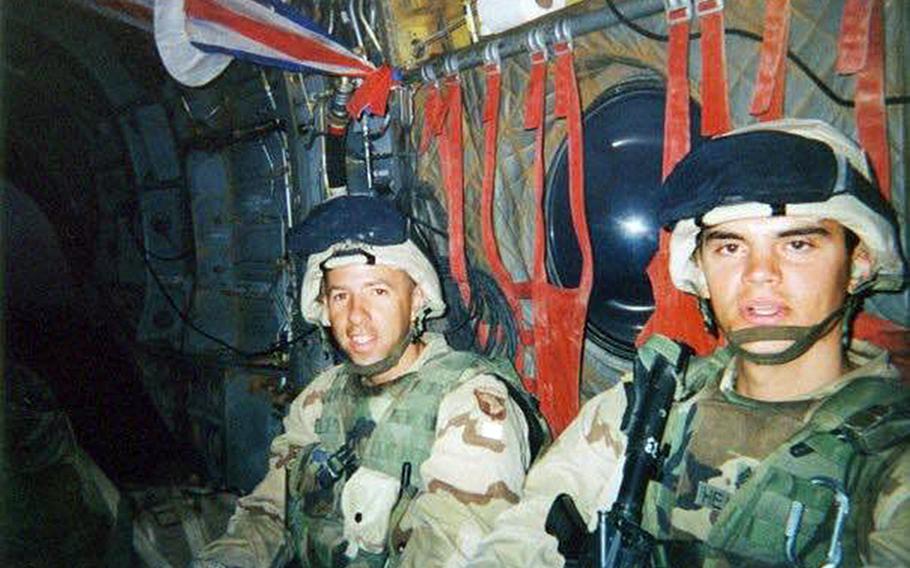 Sgt. 1st Class Eric Geressy and Staff Sgt. Scott Heaward air assault from Baghdad to Sinjar, Iraq, in 2003. Geressy, a retired Army sergeant major, went to Mosul as a platoon sergeant when the city was under the control of the 101st Airborne Division, commanded by then Maj. Gen. David Petraeus, in October 2003. (Courtesy Eric Geressy) 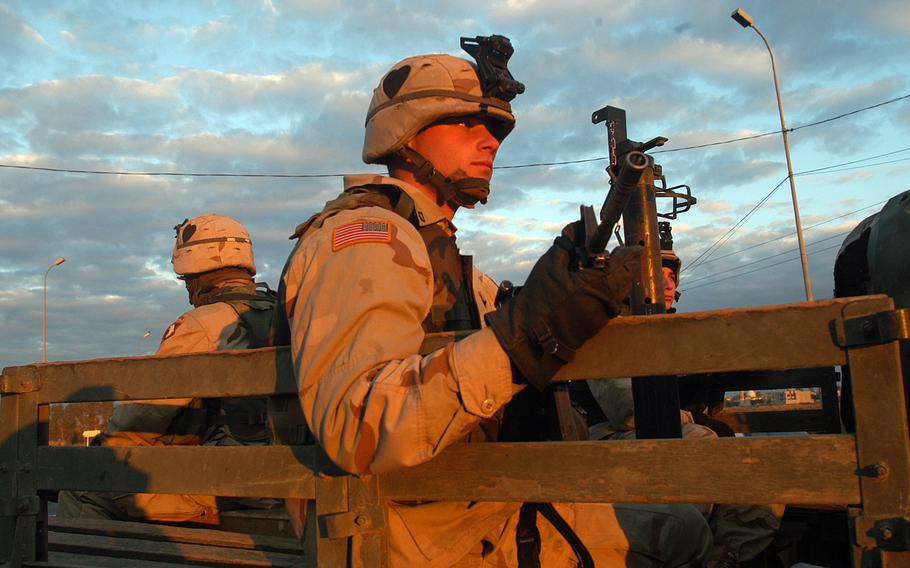 Buy Photo
Pfc. Brent Phillips, a mortarman from Hickory Ridge, Ark., sits in the back of a Humvee with an M4 carbine during a morning patrol for roadside bombs in Mosul, Iraq, Nov. 21, 2003. (Stars and Stripes) 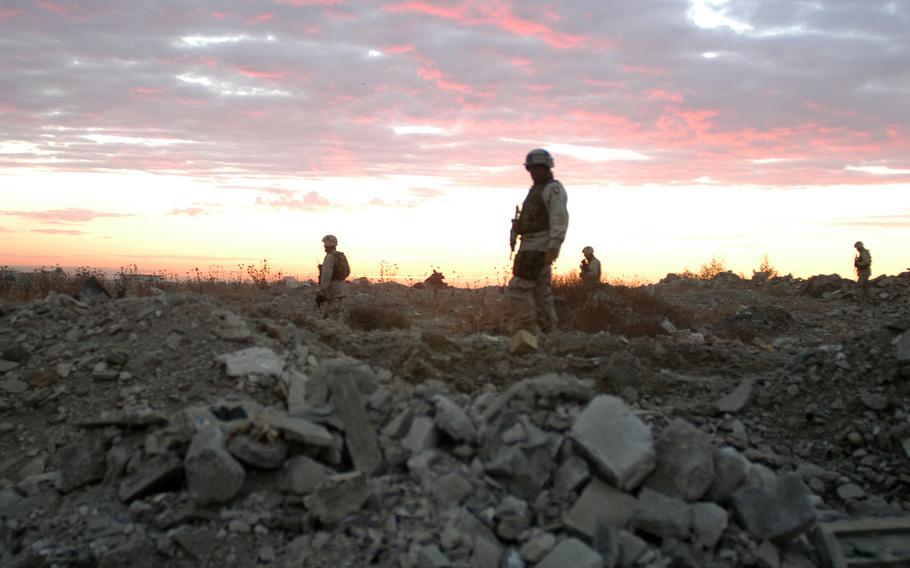 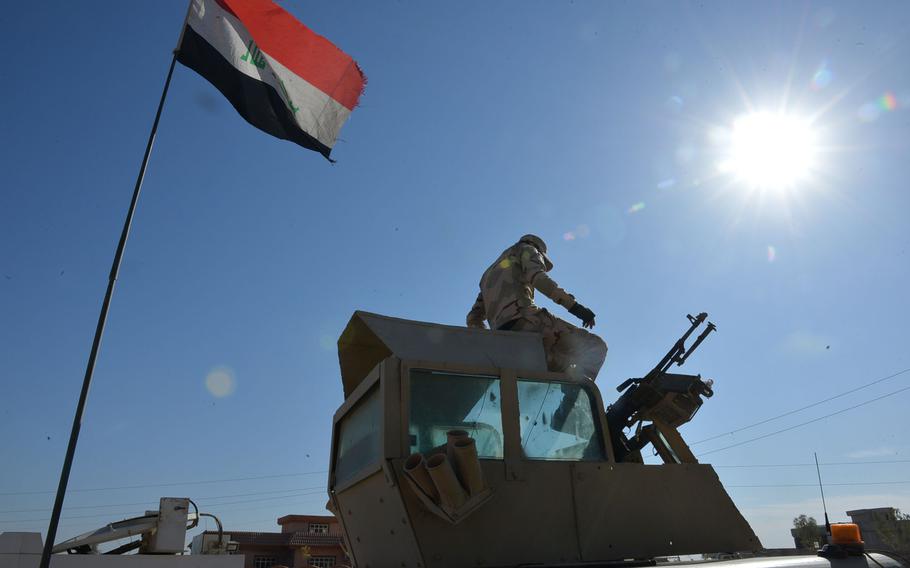 Buy Photo
A soldier from Iraq's 9th Armored Division sits atop the turret of his Humvee near Mosul on Nov. 19, 2016. (Chad Garland/Stars and Stripes) 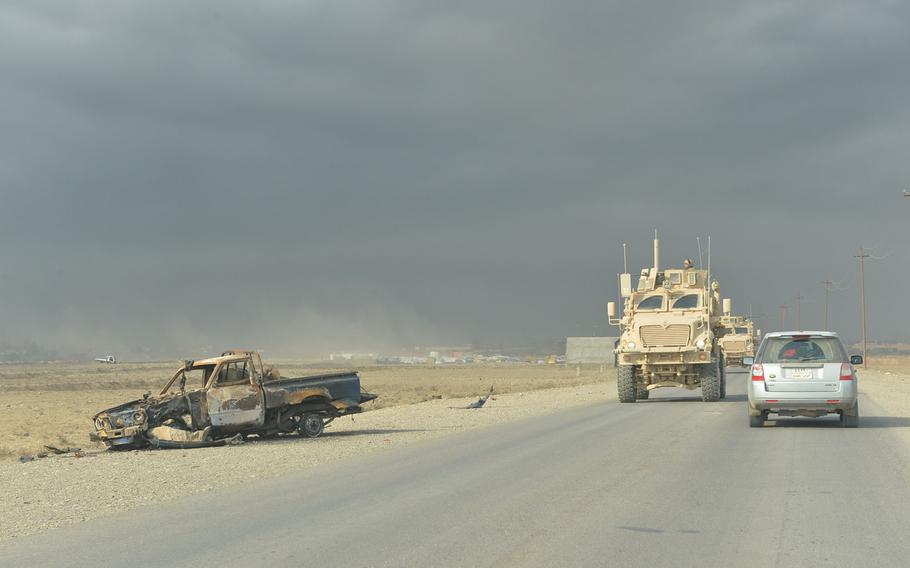 Buy Photo
A convoy of Mine Resistant Ambush Protected vehicles passes a burned-out truck on a road near Qayara, Iraq, on Nov. 10, 2016. (Chad Garland/Stars and Stripes) 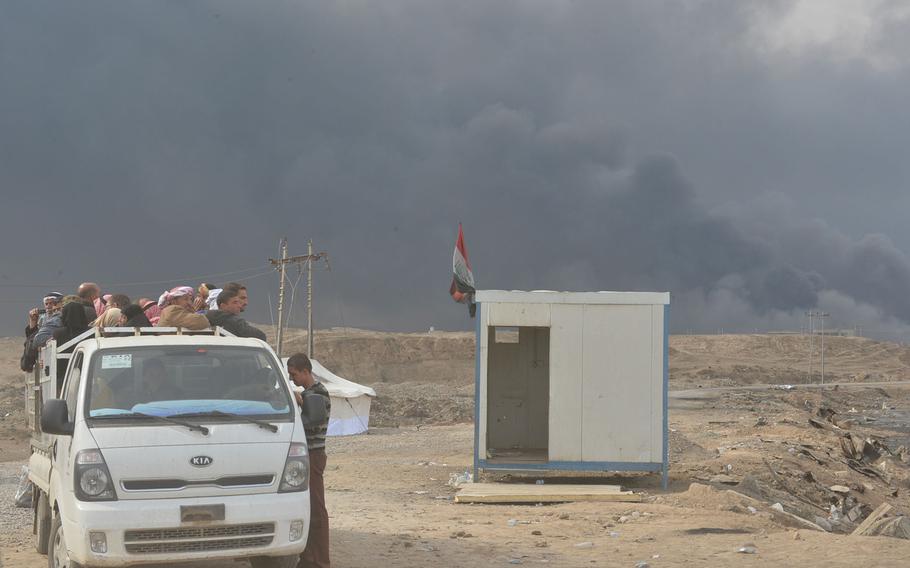 Buy Photo
A van full of displaced men is pictured here on the side of the road near Qayara, Iraq, south of Mosul, on Nov. 10, 2016. (Chad Garland/Stars and Stripes)

The battle for the Islamic State bastion of Mosul sounds like more of the same to American veterans who helped secure the Iraqi metropolis during the U.S. occupation.

U.S. forces spent years battling insurgents in Mosul and elsewhere in northern Iraq only to see their hard work undone after they withdrew and tensions flared between Iraq’s Sunnis and the Shiite-dominated government in Baghdad.

The number of U.S.-led coalition advisers embedded with Iraqi troops fighting the Islamic State group in Mosul has increased to 450 in recent weeks. Some are operating inside the city, where several thousand militants are hunkered down among more than a million civilians.

It’s an echo of the complex and confusing battle space that American forces found in Mosul during the U.S. occupation from 2003 to 2011, when an initially friendly reception turned dangerous as insurgents moved in.

The city, home to many elite Sunni families with links to toppled Iraqi leader Saddam Hussein’s regime, remained a base of operations for al-Qaida in Iraq, the Islamic State group’s predecessor, throughout the occupation.

Eric Geressy, a retired Army sergeant major, went to Mosul as a platoon sergeant when the city was under the control of the 101st Airborne Division, commanded by then-Maj. Gen. David Petraeus, in October 2003.

“We were based at Tal Afar but we were sent to Mosul after they had several casualties and quite a few guys killed in the previous month,” he recalled.

Petraeus had his headquarters in a large palace in the city built by Saddam, who was hanged on Dec, 30, 2006.

At the time U.S. forces patrolled in unarmored Humvees that, “didn’t even have doors,” Geressy recalled.

His unit was based at an old Scud missile factory called al-Kindi near Forward Operating Base Marez, he said.

On Dec. 21, 2004, Marez, which encompassed Mosul’s airport, was the target of a mess tent suicide bombing that killed 14 U.S. soldiers, four civilians and four Iraqi troops.

“We would do patrols by the university where there were educated people and they would make us tea and were friendly, but near the markets it was really bad. We got in quite a few fire fights and there were lots of IEDs, ” Geressy said.

Locals yelled: “Nassr… Nassr” — Arabic for the eagle patch of the 101st — during raids, he said.

In November 2003, Geressy watched a pair of U.S. Black Hawk helicopters collide while under attack from a rocket-propelled grenade over the city killing 17 soldiers inside. At the time, it was the greatest loss of life in a single incident in Iraq.

Geressy said he wasn’t surprised when the Islamic State captured the city in 2014.

“When we left the country, it was a Shia government and Mosul is a Sunni town. I saw the same thing happen in Baghdad, where al-Qaida came into Sunni areas and told people they would protect them from the government,” he said.

Geressy deployed to the Iraqi capital with the 2nd Stryker Cavalry Regiment in 2007.

The hostility in Mosul contrasted with the warmth of locals In the Sinjar area west of the city, many of them from the Yazidi minority religious sect, he said.

“They were really pro-American. I’d be curious to see what has happened there. From the pictures I’ve seen, that place looks like it was annihilated” by the militants, he said.

Hadi Pir, 36, a Yazidi from Sinjar who traveled to Mosul as an interpreter with the 101st, said the security situation deteriorated during 2004 as the insurgents organized.

He fled to America in 2010 when U.S. forces pulled out but worked with the State Department to get aid to other Yazidis who fled from his hometown to Mount Sinjar when the Islamic State group overran the area in 2014.

“My wife’s entire family was on the mountain,” he said in a telephone interview. “Some of my neighbors were killed or captured by the Islamic State.”

One of the largest bases for U.S. troops supporting the current Mosul campaign is Qayara Airfield West — a dusty outpost south of Mosul that was used by U.S. forces from 2003 to 2010. The base was captured by the Islamic State in 2014 and recaptured by Iraqi forces late last year. The Americans swiftly cleared and rebuilt it.

David Clark, a retired Army master sergeant, served with the 16th Sustainment Brigade at the base, which Americans call Q-West, from the summer of 2008 until September 2009 providing logistics in northern Iraq.

Back then the base was relatively secure.

“It’s surrounded by flat desert for miles, and we had aerial surveillance, so the insurgents couldn’t get close enough to launch rockets and mortars before our quick-reaction force went out and intercepted them,” he said.

U.S. forces worked hard to improve Q-West and invested millions of dollars in the facility, he said.

“When we left, another unit took over, but they didn’t finish their tour. I was told that, as soon as they left, the gates were open and the locals went in and ransacked the place,” he said.

It’s frustrating for Iraq veterans to see the state of the country today, Clark said.

“A lot of hard work and effort was put in and we lost lives, and then we just pulled out and left it,” he said. “The common soldier saw all their hard work flushed down the drain.”