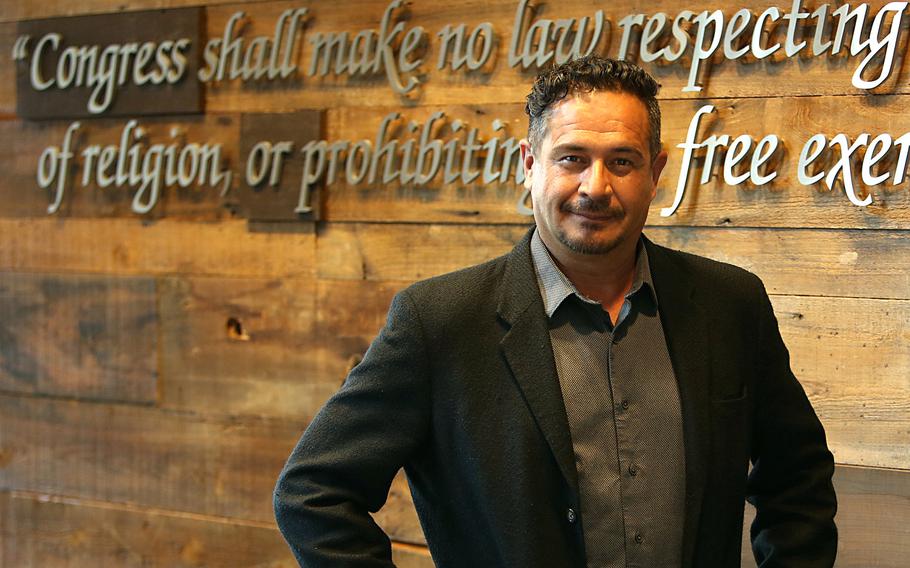 Oscar Rodriguez, pictured here, and another former airman are suing the Air Force for violating their religious liberty, dating back to a retirement ceremony at Travis Air Force Base, Calif., in 2016, when Rodriguez was thrown out for what he alleges was for a speech referencing ''God.'' (Photo courtesy First Liberty)

Oscar Rodriguez, pictured here, and another former airman are suing the Air Force for violating their religious liberty, dating back to a retirement ceremony at Travis Air Force Base, Calif., in 2016, when Rodriguez was thrown out for what he alleges was for a speech referencing ''God.'' (Photo courtesy First Liberty) 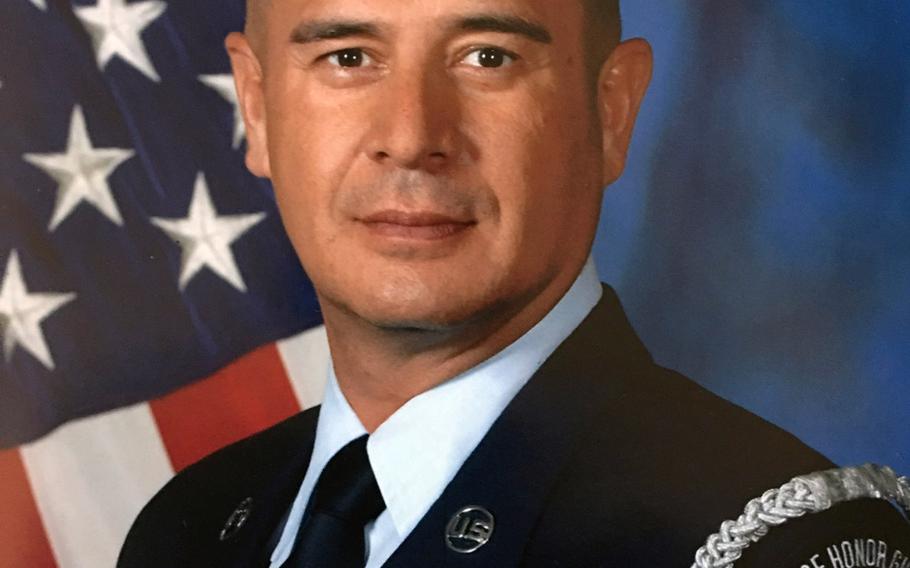 Oscar Rodriguez and another former airman are suing the Air Force for violating their religious liberty, dating back to a retirement ceremony at Travis Air Force Base, Calif., in 2016, when Rodriguez was thrown out for what he alleges was for a speech referencing ''God.'' (U.S. Air Force)

Oscar Rodriguez wanted an apology from the Air Force for cutting him off from giving a speech that mentioned God.

A retired senior master sergeant, Rodriguez had been invited by Master Sgt. Charles Roberson to speak while the flag was folded during Roberson’s retirement ceremony at Travis Air Force Base, Calif., two years ago.

Instead, Rodriguez was forcibly removed from the ceremony as he shouted out the words of a speech that the Air Force says was against regulation at the time.

The Air Force never apologized and now Rodriguez, along with Roberson, who’s also retired, are suing the service for alleged violations of their civil rights.

The two veterans are plaintiffs in a lawsuit filed Monday on their behalf by First Liberty Institute, a conservative religious-freedom organization based in Plano, Texas.

“No one should be assaulted for saying the word ‘God’ on an Air Force base,” said Hiram Sasser, general counsel for First Liberty, in a statement. “Certainly our United States Airmen are strong enough to be exposed to the word ‘God’ at a retirement ceremony.”

The lawsuit asks the court for a judgment declaring that the Air Force violated Rodriguez’s and Roberson’s free-speech rights, free exercise of religion and due process, and rights against unreasonable search and seizure.

It also wants the court to require the Air Force to follow the looser interpretation of what kinds of speeches are allowed at flag-folding ceremonies — revised after the Travis incident — and allow Rodriguez to continue to perform his speech at retirement ceremonies and other events where he’s invited to do so. The plaintiffs are seeking unspecified damages and attorney’s fees.

The incident drew national attention, and members of Congress demanded the Air Force investigate what happened. The service determined in September 2016 that Rodriguez was not removed because of the religious content of his speech. Rather, the service said he was forcibly escorted from the ceremony because he was using an unauthorized flag-folding script and had a history of misconduct that had led the squadron commander to bar him from speaking at the event.

Rodriguez intended to recite his own flag-folding speech, one that touches on religion. “This is what we fight for, and if necessary to touch the hand of God in her defense, the charge that we accept as Soldiers, Sailors, Airmen and Marines is a noble one ...” the written speech said, according to the lawsuit, which was filed in U.S. district court in Washington.

In 2005, the Air Force adopted an official flag-folding script that struck out religious references and focused on the flag’s history and its significance in the service.

Roberson was told that Rodriguez could attend the ceremony but was not welcome to give his speech, according to the lawsuit.

He told Rodriguez that despite “the potential tension,” he still wanted Rodriguez to give his speech, according to the lawsuit.

A video of Roberson’s retirement ceremony, posted online by First Liberty shows Rodriguez stand up at the front of the room behind the Honor Guard as the music plays and they begin to unfold the flag.

A uniformed airman immediately approaches and appears to speak to him. Rodriguez doesn’t budge and begins to shout out his speech as several noncommissioned officers step in and push him out of view of the camera. His voice trails off, and the ceremony eventually continues.

“That the Air Force would do this to myself, as it’s my retirement, I was very embarrassed and humiliated in front of all my family and friends,” Roberson said in an online video posted by First Liberty.

In June of 2016, First Liberty demanded the Air Force apologize to Rodriguez and admit wrongdoing.

The Air Force never did, but that same month, it released a statement saying that “personnel may use a flag-folding ceremony script that has religious references at their retirement ceremonies” since they are personal in nature.

Mikey Weinstein, founder and president of the advocacy group the Military Religious Freedom Foundation, said the Air Force statement contradicts a decade-old Air Force regulation that specifically states the official script “is the only one that may be used” at flag-folding ceremonies on or off an installation.

But given that they relaxed the requirement, the First Liberty lawsuit “is moot,” Weinstein said.

“The Air Force actually did the right thing” by removing Rodriguez from the ceremony, he said. “When it happened, the regulation was clear: Only a secular version of the flag-folding speech would be allowed.

“Allowing Rodriguez to yell like a fundamentalist Christian hurricane is the antithesis of good order and discipline,” he said.

Besides the Air Force, the lawsuit names as a defendant Col. Michael Sovitsky, who at the time was a lieutenant colonel in charge of the 749th Aircraft Maintenance Squadron. He’s now the vice commander of the 446th Airlift Wing at Joint Base Lewis-McChord in Washington.

The other defendants are Senior Master Sgt. Joe Bruno, Chief Master Sgt. Antonio Cordes, Tech. Sgt. Al Hall, and Chief Master Sgt. Dennis Thorpe. All are alleged to be the NCOs who forcibly removed Rodriguez from the ceremony, according to the lawsuit.