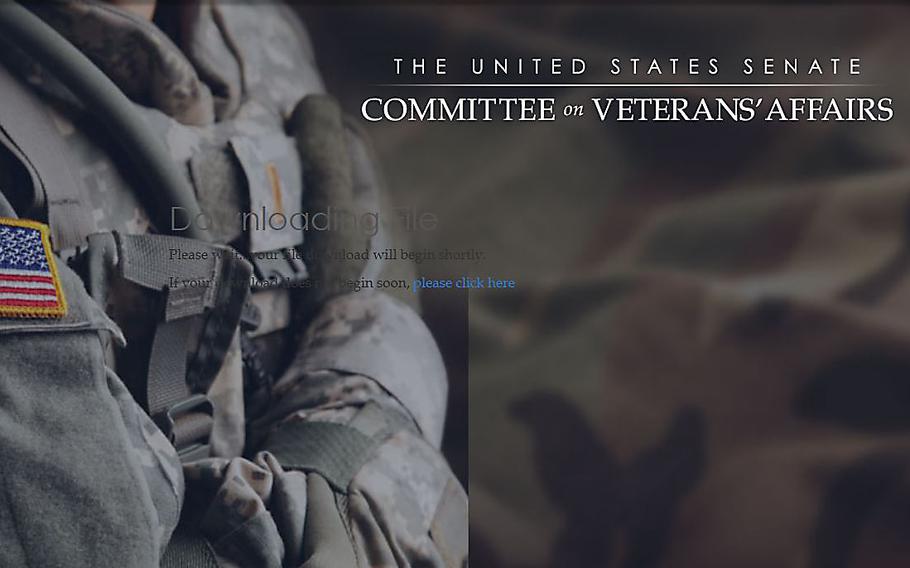 A massive veterans reform bill backed by the Department of Veterans Affairs will face resistance in Congress’ lame-duck session starting Tuesday from a group intent on letting the new Republican-controlled Senate and President-Elect Donald Trump have a say in how expeditiously VA employees can be fired.

With only a couple of months left as VA Secretary, Bob McDonald is making one final appeal to Congress to pass the reform bill that’s the culmination of his two-year tenure. The 400-page Veterans First Act contains dozens of provisions to streamline the appeals process for disability compensation, allow more leeway in disciplining employees and grant VA medical staff the ability to work flexible hours, among other things.

“We worked to design a new law. We’ve given a new law to Congress, and we’ve asked Congress to pass that new law,” McDonald said Thursday during an event at The Washington Post. “I’m hoping it gets passed in the lame-duck session.”

But the legislation has garnered opponents, including conservative-leaning Concerned Veterans for America, an organization that serves veterans and plans a major campaign starting Tuesday to thwart efforts to move the bill through the Senate.

‘Power of the presidency’

The bill was authored by the Senate Committee on Veterans’ Affairs chairman Sen. Johnny Isakson, R-Ga., and ranking member Sen. Richard Blumenthal, D-Conn. In the months after its introduction, six large veterans service organizations came out in support of it: Vietnam Veterans of America, Veterans of Foreign Wars, Paralyzed Veterans of America, The American Legion, Disabled American Veterans and AMVETS.

Concerned Veterans for America says the legislation is “watered down.”

With Trump elected president, Congress should wait to pass a stronger bill that would give the next VA Secretary more power to immediately fire employees, said CVA leader Dan Caldwell.

Trump would likely be in favor of “more aggressive accountability efforts,” Caldwell said.

In campaign statements, Trump said he wants to “use the power of the presidency” to discipline and fire VA employees and pass legislation that gives that authority to the new VA Secretary. Furthermore, he’s said he wants to “drain the swamp” in Washington and cut the number of federal employees.

“They wrote it with the intent of hopefully passing it and having President [Barack] Obama sign it into law,” Caldwell said of the Veterans First Act. “It is a compromised bill. With the new reality we’re facing as a result of the election, and with the incoming president making it very clear he supports making it easier to fire bad VA employees, it doesn’t make sense to pass a watered-down accountability bill at this point.”

The day after the election, Concerned Veterans for America initiated a campaign to halt the Veterans First Act. The legislation passed the Senate Committee on Veterans Affairs unanimously in June and could be taken up by the full Senate during the session starting Tuesday.

The group is asking veterans to contact their senators and tell them to vote against it. CVA has created an advertising campaign against the bill, and it flew in its field staff to go door-to-door to senators’ offices Tuesday.

“The VA Secretary will likely apply pressure, and I know some members of Congress still want to see it passed in lame-duck,” Caldwell said. “We want to make sure we’re letting members of the Senate know we don’t view this as a positive bill for veterans.”

A piece of the Veterans First Act aims to reduce the amount of time required to notify a federal employee of disciplinary action and allow them to appeal it.

Under the current system, the Merit Systems Protection Board hears appeals from federal employees when they’re demoted or fired. The legislation proposes removing that board from the process for VA employees and creating a new Office of Accountability and Whistleblower Protection, which would be under the oversight of Congress.

Lawmakers have pushed for the MSPB to be removed from the process after the board reversed a series of disciplinary actions against VA executives in malfeasance cases.

Rep. Jeff Miller, R-Fla., introduced legislation in the House that competes against that provision of the Veterans First Act. The House passed the bill – the VA Accountability First and Appeals Modernization Act – in September.

Miller’s bill would set a time limit the MSPB has to decide a case, and it would remove the board altogether from the process of disciplinary action against senior executives.

The Obama administration issued a statement about it, saying that part of the bill would strip VA employees of their rights, raising questions about its constitutionality.

Caldwell said that if the current Congress were to pass a veterans bill in the lame-duck period, Miller’s bill should be it.

Miller, who has been critical of the VA since the wait-time scandal in 2014, could soon have a larger hand in what happens in the department. Trump has said he is considering Miller as the next VA Secretary, The Associated Press previously reported. Miller is retiring from Congress in January.

In a report released the day following Election Day, the VA cataloged its achievements since McDonald took the position in 2014.

The report states the VA has completed about 58 million health care appointments in fiscal 2016, up by 1.2 million from fiscal 2015. It also states 82 percent of VA facilities have improved overall quality and that more veterans trust the VA.

In the report and in person Thursday, McDonald criticized Congress for the progress that hasn’t been made.

Besides holding up a Senate vote on the Veterans First Act for several months, Congress has stalled the approval of leases for 24 new community clinics, McDonald said.

In a letter topping the new report, McDonald appealed to Congress to pass the Veterans First Act, writing that current members have “one final opportunity to do what’s right for veterans.”

“Otherwise, we risk prolonging eminently surmountable challenges that have plagued you and your VA for far too long,” he wrote. “Congress should fulfill its responsibility to veterans and their families by taking immediate action.”