Veterinary unit back in Germany after mission to Iraq 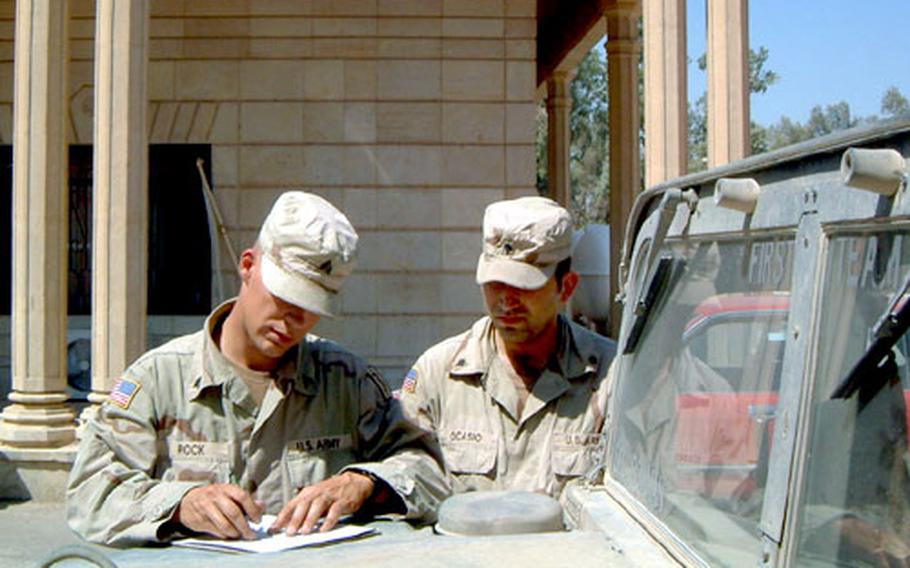 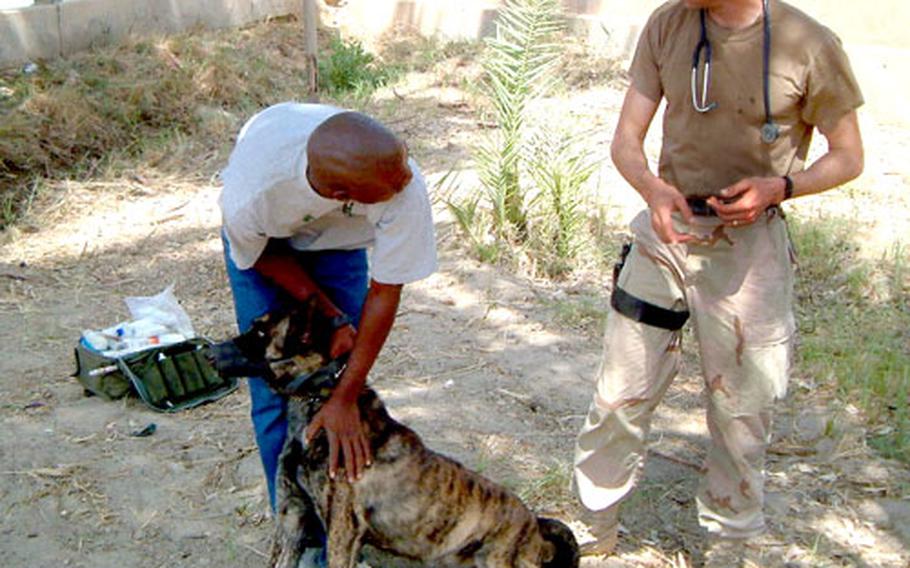 Capt. Carl Shaia, right, begins an examination of a demining dog in Iraq in June. Shaia is commander and veterinarian for 21st Medical Detachment (Veterinary Services, Small) based in Hohenfels, Germany. Most of the detachment’s seven soldiers returned home last month. (Courtesy of U.S. Army)

HOHENFELS, Germany &#8212; Five soldiers from the 21st Medical Detachment (Veterinary Services) returned home from Iraq in time for Thanksgiving. However, they were probably pretty sick of seeing food by then.

The soldiers had two primary missions in and around Baghdad: They inspected all of the food soldiers would be eating and provided medical care for military working dogs, according to Capt. Carl Shaia, detachment commander.

During the eight-month deployment, the detachment&#8217;s five food inspectors checked 42 million pounds of rations, including all food and water that soldiers consumed, said Sgt. 1st Class Morgan Bowman, the detachment&#8217;s noncommissioned officer in charge. One of the food inspectors remains deployed, attached to the 72nd Medical Detachment (Veterinary Services). Another soldier from the 72nd, who was attached to the 21st, returned with the unit on Nov. 25, Bowman said.

Although the detachment had its animal hospital and living quarters based at Baghdad International Airport, the soldiers spent many days on the road, pulling more than 130 convoys to cover all of the bases in the Baghdad area, Bowman said.

Shaia, the detachment&#8217;s veterinarian, and Spc. Johnnie Kelly, an animal technician, provided emergency and routine care for about 35 to 40 Department of Defense-contracted dogs, including military working dogs and demining dogs, Shaia said.

The vets were able to treat some animals in the field using medical kits, but most care was provided at the small clinic set up at their headquarters, Shaia said.

&#8220;With the medical kits, we could provide some emergency care and even anesthesia in the field,&#8221; Shaia said. &#8220;But the important thing was to make the connection with dog handlers so they knew where our clinic was.&#8221;

Shaia and Kelly also assessed the animals at the Baghdad zoo for nonprofit organizations that sought to re-establish the zoo and stop looting, Bowman said.

While it seems like a big workload for the handful of soldiers, Shaia said it isn&#8217;t uncommon for a small detachment to handle such a large area and volume of work.

&#8220;Because [food inspectors and animal technicians] are such a rare variety of soldier, there are not a lot of us on any given deployment,&#8221; Shaia said.