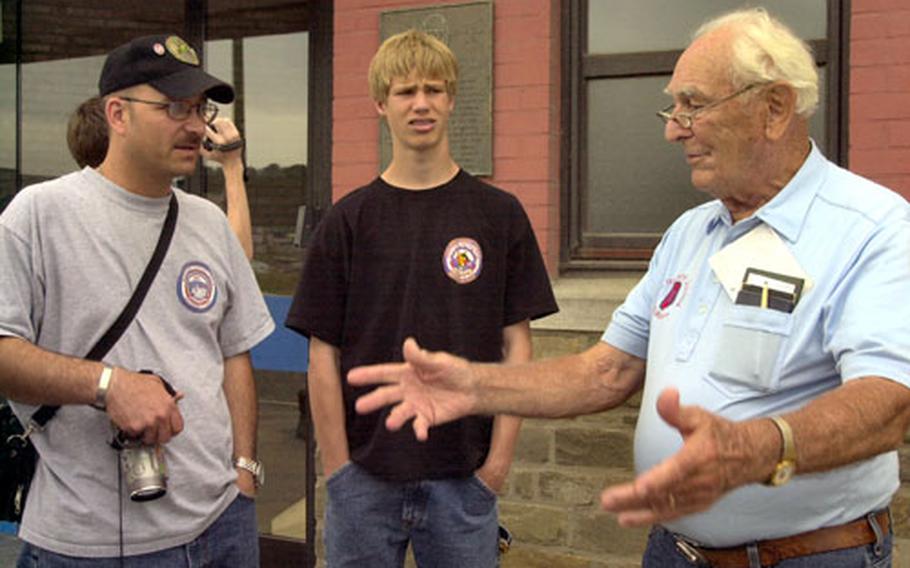 Frank Towers, an Army first lieutenant during World War II, on Wednesday talks to Air Force Master Sgt. Kyle Thomas and his son, Jordan Thomas, before leading the group of high school students and members of the European History Group to the site of the Malmédy Massacre. Jordan was one of the Bitburg High School students who made a video about the event. (Scott Schonauer / S&S)

Frank Towers, an Army first lieutenant during World War II, on Wednesday talks to Air Force Master Sgt. Kyle Thomas and his son, Jordan Thomas, before leading the group of high school students and members of the European History Group to the site of the Malmédy Massacre. Jordan was one of the Bitburg High School students who made a video about the event. (Scott Schonauer / S&S) 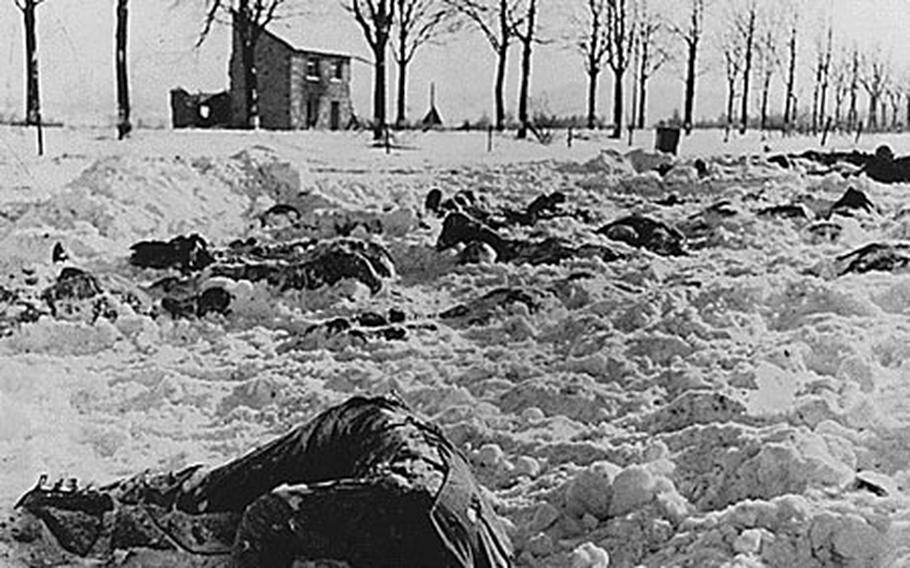 The bodies of U.S. prisoners lie where they fell after they were gunned down during the Malmédy Massacre in 1944. (U.S. government photo) 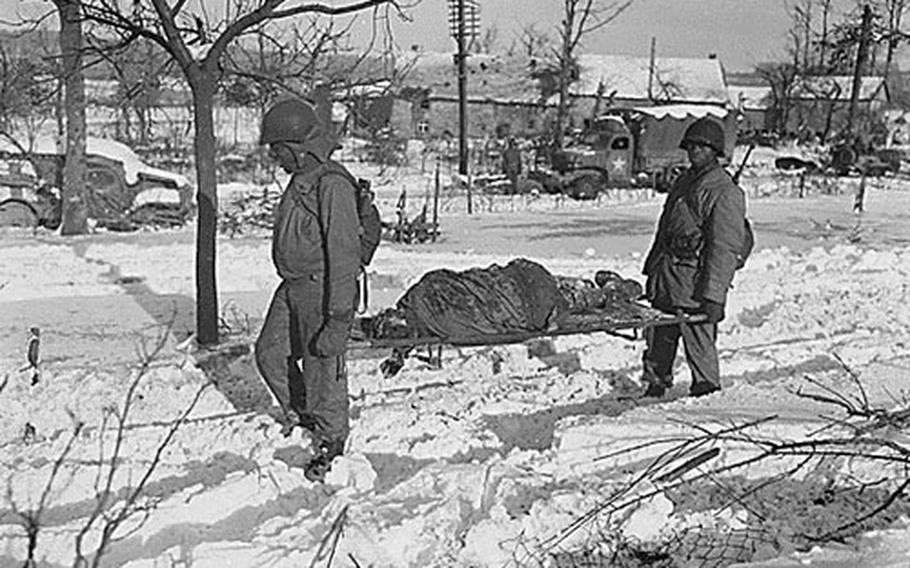 U.S. soldiers carry away one of the victims of the Malmédy Massacre in 1944. (U.S. government photo)

MALM&#201;DY, Belgium &#8212; Frank Towers stands along the two-lane road and stares at the grassy field. His eyes begin to well, but he appears to catch himself before a single tear can drip over onto his cheek.

It has been 62 years since Towers stood at this spot in Baugnez, a crossroads near Malm&#233;dy and saw the frozen bodies of U.S. soldiers massacred by German troops during World War II.

American soldiers found the bodies of 84 fellow servicemembers, killed in what is now known as the Malm&#233;dy Massacre. The incident is regarded as the worst atrocity against U.S. prisoners during the war.

Towers, who turns 90 next month, has traveled to the site nearly every other year for the last 35 years. On Wednesday, he returned to give a tour to members of a history group from Spangdahlem Air Base in Germany and three high school students.

As grotesque as the massacre was, Towers does not want to forget what he saw. He is trying to keep the incident alive by talking about it, even though he believes interest in the war is dying, just as many of the veterans now in their 80s and 90s are.

On Wednesday, after a lunch of venison and white asparagus, two local favorites, the students and members of the European History Group, a preservation organization of about 30 people from the Spangdahlem area, followed Towers to Baugnez.

The village is just outside Malm&#233;dy. Towers who was a 27-year-old Army first lieutenant serving with the 30th Infantry Division as the regimental liaison when the massacre occurred, began describing it.

On Dec. 17, 1944, an American convoy of about 30 vehicles with Battery B of the 285th Field Artillery Observation Battalion approached a crossroads soldiers called the Five Points.

A regiment of the 1st SS Panzer Division led by Lt. Col. Jochen Peiper, spotted Battery B and opened fire not far from the crossroads. The Americans, carrying only pistols and rifles, were outgunned and surrendered in minutes.

The Germans led more than 100 prisoners to the field near Caf&#233; Bodarwe, where Peiper&#8217;s unit opened fire on the unarmed men. Most of the prisoners were killed on the spot, but some escaped to a nearby cafe. Peiper&#8217;s men set the cafe on fire and killed anyone who tried to flee.

Still, some prisoners managed to escape and later told the story of the massacre. The story infuriated Americans and outraged soldiers.

A month later, U.S. troops found the bodies buried in the deep snow. As soon as Towers heard about the discovery, he traveled to the site.

Autopsies showed that most prisoners were shot in the head at close range. Another 10 were beaten to death by rifle butts.

In 1946, 73 German soldiers from Peiper&#8217;s group were put on trial for the murders. The court convicted the men, but problems with the trial would lead to the sentences being commuted.

Not to be forgottenThat is only part of Towers&#8217; frustration over the massacre. What upsets him the most today is many people don&#8217;t know about the atrocity, and few seem interested in learning about it.

Other than war history buffs, he said fewer Americans seem to care. He doesn&#8217;t get many invitations to talk to schools near his home in southern Florida. When he does, he said it doesn&#8217;t seem as though the students are very interested.

Three students from Bitburg High are the exception. They produced a video detailing the history of the massacre that won the European region&#8217;s National History Day award.

Jordan Thomas, 17, was one of three students who came on Wednesday&#8217;s tour.

Many people in Belgium, a country liberated by Allied forces during the war, feel the same way, and are quick to show their appreciation to American veterans who come to visit.

Before the group headed to the field and massacre memorial, a Belgian woman gave a glimpse of that adulation. After she finished her lunch and began to walk out of the restaurant, she noticed Towers.

She walked over, tapped him on the shoulder and asked him in French when he was in Belgium during the war.

She grasped his hand and gave him a kiss on the cheek.