Veteran's Pokemon battles help him fight back after TBI 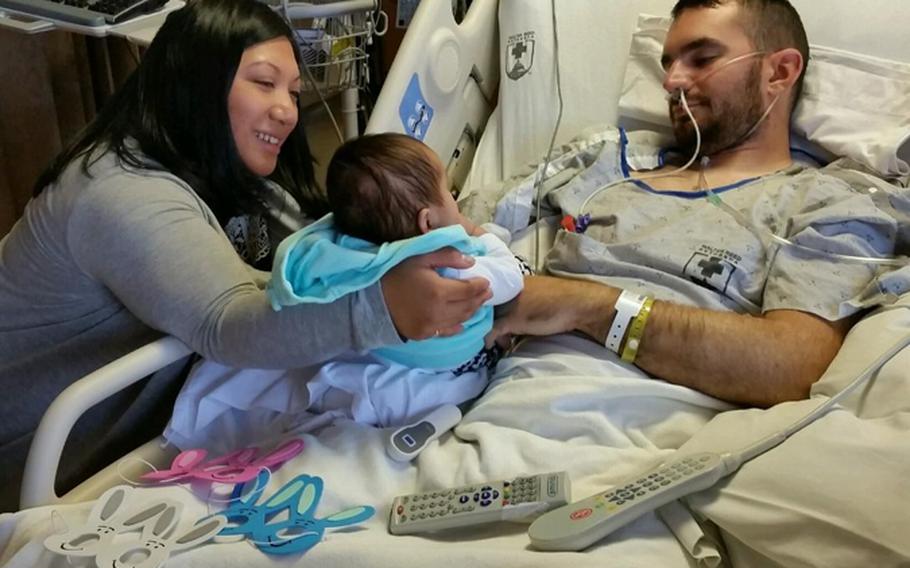 Zach Brooks, 32, suffered a brain injury while deployed to Kuwait in 2016. His wife, Elaine, helped take care of their two children and also with his recovery. (Courtesy of Elaine Brooks)

Zach Brooks, 32, suffered a brain injury while deployed to Kuwait in 2016. His wife, Elaine, helped take care of their two children and also with his recovery. (Courtesy of Elaine Brooks) 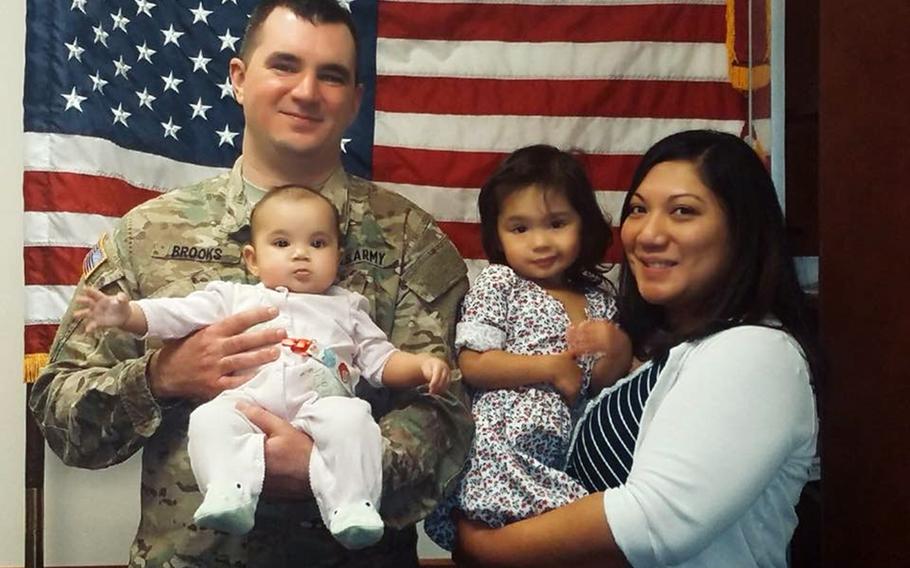 Zach Brooks, 32, suffered a brain injury while deployed to Kuwait in 2016. He medically retired in 2018 as a captain. His wife, Elaine, said coming to terms with his new post-injury self was hard for him. (Courtesy of Elaine Brooks) 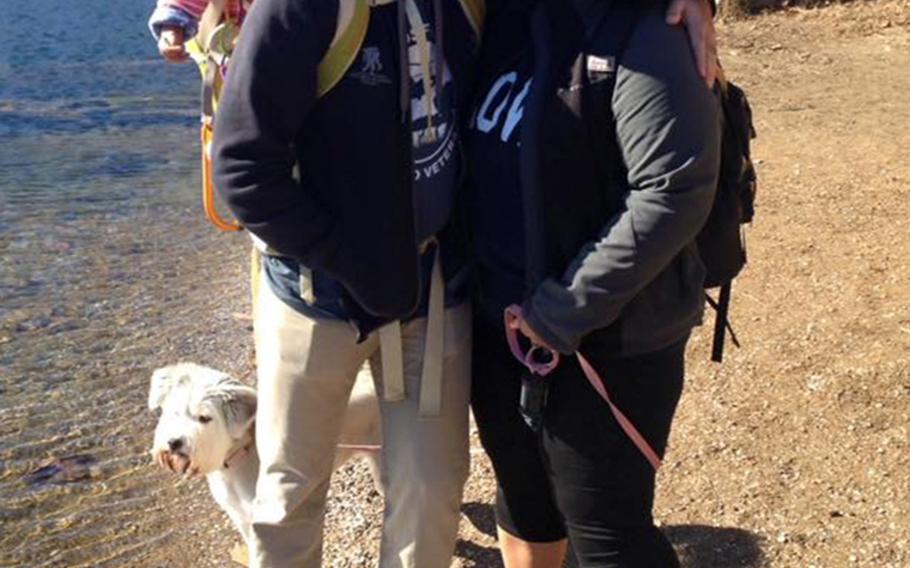 Zach Brooks, 32, suffered a brain injury while deployed to Kuwait in 2016. He was airlifted from Kuwait back to America, and used video games during his recovery. He is now able to exercise and walk with his family. (Photo courtesy of Elaine Brooks) 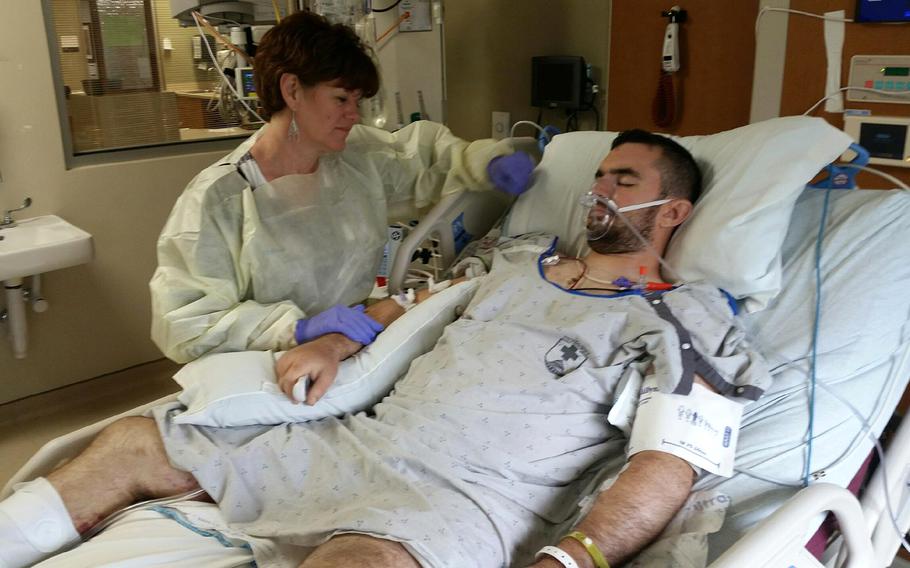 Zach Brooks, 32, suffered a brain injury while deployed to Kuwait in 2016. He was airlifted from Kuwait back to America, and used video games during his recovery.His mother, Sally Brooks, helped him recover by plaing card games with him. (Photo courtesy of Elaine Brooks) 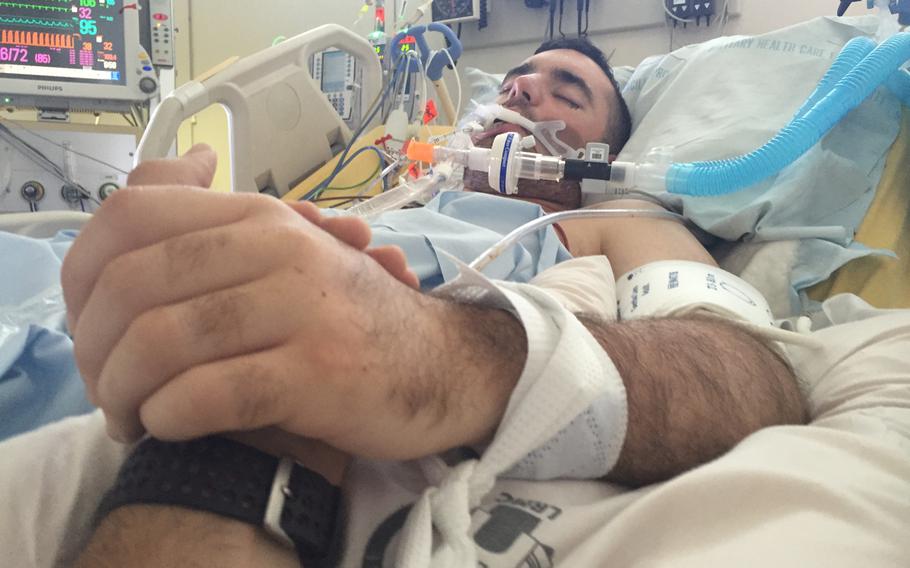 Zach Brooks, 32, suffered a brain injury while deployed to Kuwait in 2016. He was airlifted from Kuwait back to America, and used video games during his recovery. (Courtesy of Elaine Brooks)

A stroke robbed Zach Brooks of his memory, fine-motor skills and even parts of his identity as a soldier, but the father of two is rebounding partly with help from a world of flaming lizards, electrified rodents and flowering dinosaurs.

While deployed to Kuwait with the North Carolina Army National Guard as an intelligence officer in 2016, Brooks was in a car heading back to base after a run in the desert when a bus T-boned the vehicle, said Lt. Col. Brian Grey, his boss at the time. Brooks’ lungs had collapsed and veins in his skull burst, bleeding into his brain and causing a traumatic brain injury.

After being airlifted to Walter Reed National Military Medical Center, he suffered weeks of post-traumatic amnesia, unable to remember who he was, what had happened or how to do everyday tasks. While recovering in a hospital bed, he played games to help remap his brain, eventually turning to the popular Pokemon video games featuring animal-like creatures with unusual powers.

“The main things in regrowing brain tissue [are] reading, hand-eye coordination and problem-solving,” said Brooks, 32. “Games have all of these.”

With some 380,000 troops diagnosed with TBI in the past 18 years, both the Pentagon and Veterans Administration have invested heavily in research to help diagnose and treat such injuries, which can be debilitating. The Army awarded a handful of small businesses more than $4 million in contracts to research and develop possible video game therapies for TBI between 2009 and 2015.

Rehab can be costly and time-consuming, requiring TBI patients to put in lots of tedious practice, said one of those companies, Southern California-based Blue Marble Rehab, in its proposal to develop a game it hoped would lower costs, improve access and make training more fun, thus increasing time spent on rehabilitation.

Researchers in the U.S. and abroad have found some evidence video games may help by improving TBI-sufferers’ independence and ability to perform daily tasks, or boosting their attention and cognition.

Brooks needed help with his memory, concentration and more.

“When you have a TBI, you lose your executive function, your planning and execution of whatever you’re doing,” said his wife, Elaine Brooks.

The first time he showered after the accident, he just stared at the wash cloth and a bar of soap he held in each hand, he recalled. His mother had to explain how to wash and dry off.

Both his mom and wife dedicated themselves to his recovery, rotating every two weeks between home in North Carolina and the hospital in Bethesda, Md. His wife eventually quit her job as a nurse to care for him full-time as he battled the stroke’s effects.

Leveling up His mom began playing card games like “Rummy” and “Phase 10” with him because they didn’t need more space than a hospital tray and it forced him to focus and keep score. Early on he struggled, but the more they played, the better he got.

He went from “thinking in the moment” to looking ahead and considering the ramifications of a possible play, said his mom. After a few months, he seemed more like himself, and though he still struggled with some tasks, he adapted.

“I pretty much had to look at things and say, ‘OK brain, you can’t do this anymore, but you can come up with a new way,’” Zach Brooks said.

After nearly two years at Walter Reed, he was discharged and medically retired as a captain in February 2018. Not being able to return to duty hit him hard, his wife said.

He had to come to terms with the loss of his identity as an officer who could once run 30 miles. He went through all five stages of grief, she said.

“With a TBI, you’re not going to be the exact same person you were before,” Elaine Brooks said. “That’s probably the hardest thing to accept.”

Despite occupational therapy, he still has trouble with mood swings and learning new things, he said. He also has lingering physical effects, such as weakness and a lack of coordination on his right side.

That meant his brain and fingers weren’t as fast as before, when he’d competed in “Halo” and “Super Smash Bros.” video game tournaments — lightning-fast contests requiring quick reflexes and manual dexterity.

So he turned to Pokemon.

Recent generations of the game are much more complicated than the series’ first installment, which Nintendo debuted in 1996. It now has more than 800 different creatures, each with four possible moves and a dozen rated traits affecting gameplay.

He’s also found a community and the sense of belonging he felt in the Army and at gaming tourneys in high school, he said. He chats with and plays regularly against others online, and is still sometimes recognized for his playing from years ago.

In a sign of his progress, a Pokemon team and strategy he created was recently featured on the popular YouTube channel “pokeaimMD.”

His next step: going from Pokemon trainer — someone who collects, grooms and battles with the fictional pocket monsters — to fitness trainer. While he’ll never be as fit as before, he’s regained much of the body mass he lost after the injury and recently enrolled in a program that certifies veterans as personal trainers, which he hopes will help him to inspire others.

He’s progressed quite a bit since the accident, said Grey, his former boss. “I’ve been really impressed by how resilient he has been,” he said.

He’s adapted both in gaming and in life, said his wife. “Every day is a step closer to getting him back to where he wants to be.”