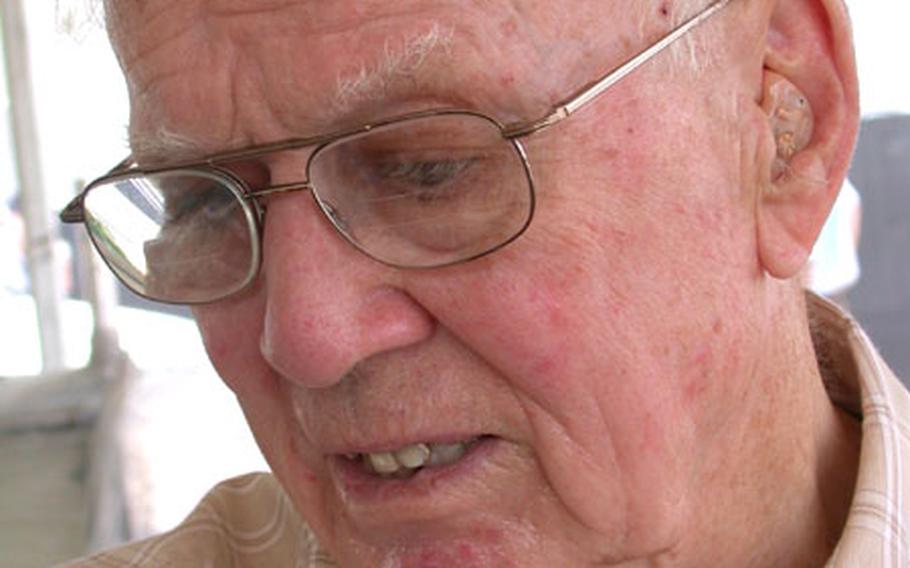 Richard Francies, an Army technical sergeant who was installing radio stations in Bataan when the Japanese invaded, is one of an estimated 200 survivors of the Bataan Death March who are still alive to tell about their experiences. (Lisa Burgess / S&S)

Richard Francies, an Army technical sergeant who was installing radio stations in Bataan when the Japanese invaded, is one of an estimated 200 survivors of the Bataan Death March who are still alive to tell about their experiences. (Lisa Burgess / S&S) 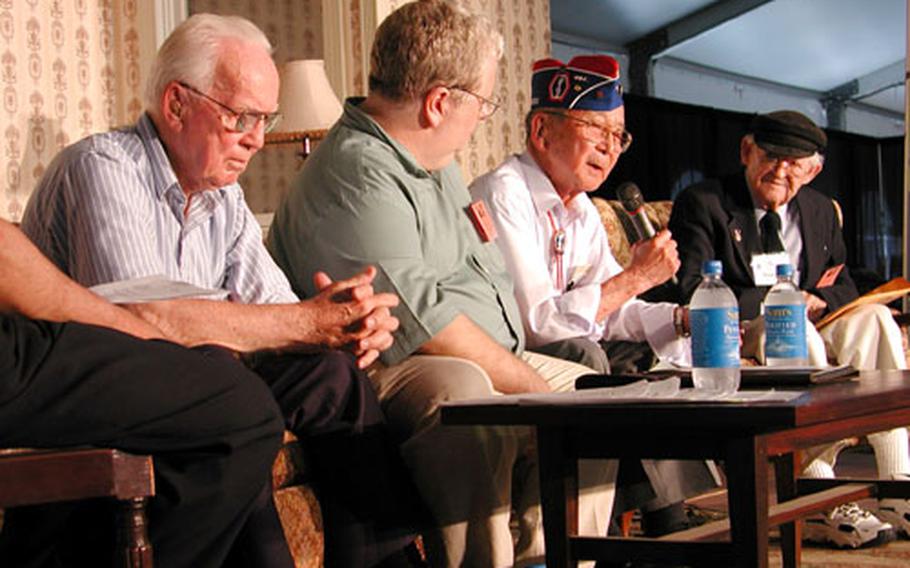 ARLINGTON, Va. &#8212; Every servicemember attending the World War II Memorial dedication festivities in Washington this weekend has a story to tell.

But few have stories as compelling as the one Richard Francies told Thursday during a presentation by former prisoners of war and, later, in conversation with Stripes.

Francies is one of an estimated 200 living survivors of one of the most horrific experiences of U.S. troops during WWII: the Bataan Death March.

No one knows exactly how many men died on the march. But conservative estimates say that of the 70,000 American and Filipino men who started the hellish journey, 10,000 died from various causes, including sickness, beatings and execution.

Of these victims, 2,330 are thought to have been Americans.

Francies&#8217; personal road to Bataan began when he joined the Army Signal Corps at 18. He asked to be stationed in the Philippines to get &#8220;as far away as I could&#8221; from a hated first sergeant at Fort Monmouth, N.J., Francies said.

Francies spent two years as a technical sergeant in the Philippines, building radio stations and maintaining the equipment.

He was three days away from rotating home to the United States when Pearl Harbor was attacked, on Dec. 7, 1941.

The Japanese quickly attacked U.S. troops stationed in the Philippines, among other places in the Pacific.

By the time the final battle for Bataan opened, in the spring of 1942, Francies&#8217; unit had been placed at a radio station located high on a ridge of the Mariveles, a mountain at the tip of Bataan peninsula on Luzon Island.

U.S. troops on Bataan were in poor shape at that point. Supply lines to the island were ridiculously inadequate, and since January the troops had been on half-rations, and later, on one-quarter of their normal rations, Francies said.

There also wasn&#8217;t enough medicine to go around. Many men, including Francies, were weak and sick with malaria, dysentery, beriberi, and dengue fever.

On April 9, Francies&#8217; commanding officer told his men that the end had come. The U.S. general in charge of the island had surrendered, in an attempt to prevent the wholesale slaughter of 68,000 Filipinos, 12,000 Americans and thousands of civilians.

As Francies and his fellow soldiers walked down the zig-zagging mountain road, they pulled their weapons apart and threw the pieces into the jungle.

At the bottom of the mountain, the soldiers joined a larger group of U.S. prisoners that the Japanese had collected in a field. There, with the fierce tropical sun burning down and no shelter, the group sat for three days.

Then began the march, an ordeal that lasted 11 interminable days for Francies.

Shivering from malaria, he focused on staying in line. Anyone who couldn&#8217;t keep the pace was bayoneted. Anyone who tried to help a fallen comrade was also shot.

One small consolation to the prisoners was the hundreds of Filipino civilians lining the roads, the women searching for husbands and fathers among the prisoners. The Filipinos even threw food wrapped in banana leaves to the marchers, risking their own deaths at the hands the Japanese troops.

But finally, Francies could walk no more.

Francies found &#8220;a lot of shrubbery&#8221; and pushed his way through, and collapsed, hidden from the guards.

As he was trying to gather the strength to stand again, an old Filipino man tapped him on the shoulder. Francies mimed the reason for his &#8220;rest,&#8221; and the old man disappeared &#8212; only to reappear with Japanese medical corpsmen.

The corpsman shot him, all right &#8212; but not with bullets. Instead, the Japanese soldier gave Francies an injection of some kind.

To this day, Francies said, he does not know how he managed to find the only Japanese soldier willing to help him, instead of kill him on the spot.

Finally liberated and returned to the United States, Francies and other Bataan survivors could not convince their fellow Americans just how horrible the march had been.

Francies has delivered slide shows and lectures about his experiences to more than 100 civic groups over the years, yet he balks when pressed for specifics on the smells, sounds and sights of the march.

And neither time nor talk has exorcised what Francies called &#8220;a guilty syndrome about being alive.&#8221;

So many people have died since he was released from Bataan, people much younger than himself, people who have never heard a shot fired in anger or worn a U.S. uniform in a foreign land.

And Francies said he wonders about that.

Asked if he&#8217;s come to any conclusions, Francies shook his head, frowning.