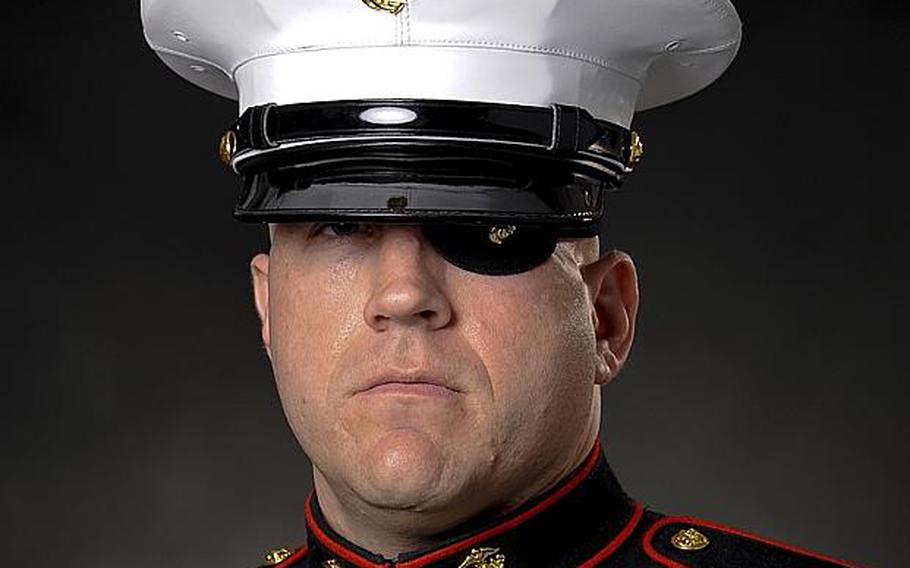 Gunnery Sgt. Edward Schrank, 34, who lost an eye to cancer, is embarking on a new career: owner of a Sears Hometown Store that he won in a national contest. The franchise, in Rochelle, Ill., opened last month. (Courtesy of Edward Schrank)

WASHINGTON &mdash; Gunnery Sgt. Edward Schrank had his left eye surgically removed in a bid to beat a rare form of cancer. He endured two intense rounds of proton therapy, a highly unusual treatment that left him convinced he now holds the unofficial record for most medical radiation.

The medical care saved his life, but it cost him the military career he loved.

&ldquo;It was devastating to know I was not going to be a Marine anymore,&rdquo; said Schrank, who enlisted in 1996, served in Iraq, and made it most of the way through a program that sent promising enlisted Marines to college before the adenocarcinoma diagnosis. &ldquo;It took me the better part of a year to get over that. ... The only way to pay proper respect and homage to how much I love the Marine Corps is to do something even better.&rdquo;

For now, at least, Schrank has found his &ldquo;something even better&rdquo; in an unlikely place. Last month, in his final weeks of active duty before medical retirement, he opened a Sears Hometown store in Rochelle, Ill., about 80 miles west of Chicago. Schrank won the store last year in a Sears-sponsored competition for veterans called Operation Stores & Stripes.

Besides waving the franchise fee, Sears provided the costs of construction and all the money required to operate it for 90 days. Sears Hometown Stores are independently owned and operated, with a business model geared toward smaller communities such as Rochelle, population 9,800.

Schrank said he spent hundreds of hours last year gathering community support for the store and proving it to Sears as part of the competition.

&ldquo;My only competitive advantage was the community I partnered with,&rdquo; Schrank said. &ldquo;The community of Rochelle drove that contest way more than my deserving to win did.&rdquo;

Sears doesn&rsquo;t have current plans to repeat the competition, according to a spokesperson, but Schrank said he hopes that if he proves the concept works, the company will eventually offer the promotion to other veterans as well. The 12,000-square foot store employs seven people so far, Schrank said, and it&rsquo;s profitable already.

&ldquo;Right now, we&rsquo;re just kicking off the beginning stages of lawn and garden,&rdquo; Schrank said, &ldquo;so the biggest thing people want to come in and see is our amazing collection of tractors.&rdquo;

Still, it&rsquo;s a far different place from where Schrank thought he&rsquo;d be five years ago. He&rsquo;d hoped to become a commissioned officer, in part because it would have meant he could increase the number of years he could serve.

Instead, he made the best of things and earned a master of business administration on top of his bachelor&rsquo;s degree while undergoing treatment from 2006 to 2009. Still, he said his Marine Corps leadership experience is his biggest asset.

&ldquo;Once you can acquire a bit of finance and accounting, then the leadership skills that you have from the military environment ... will be the biggest competitive advantage&rdquo; for any veteran who wants to get into business, he said. &ldquo;The military is a leadership factory. That love and care you have for people, it&rsquo;s genuine. You can&rsquo;t fake it.&rdquo;