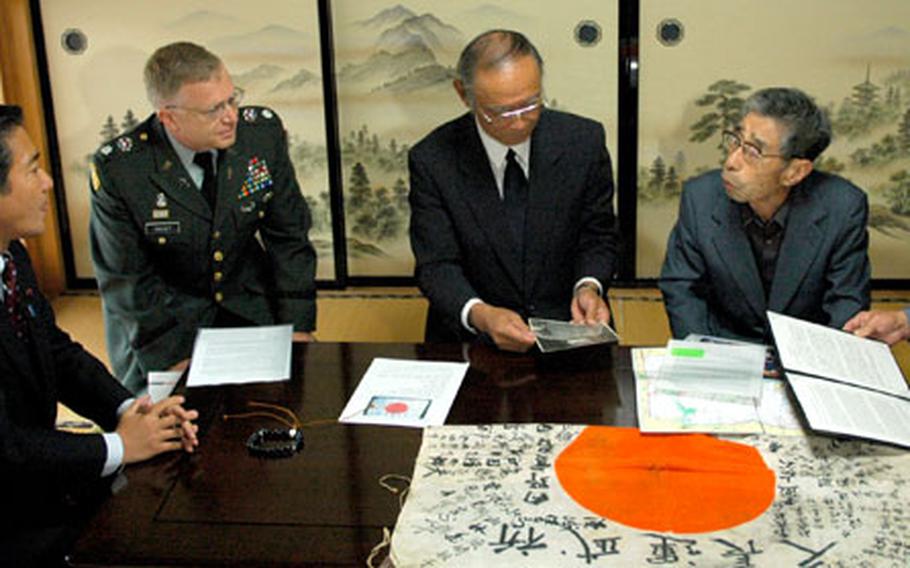 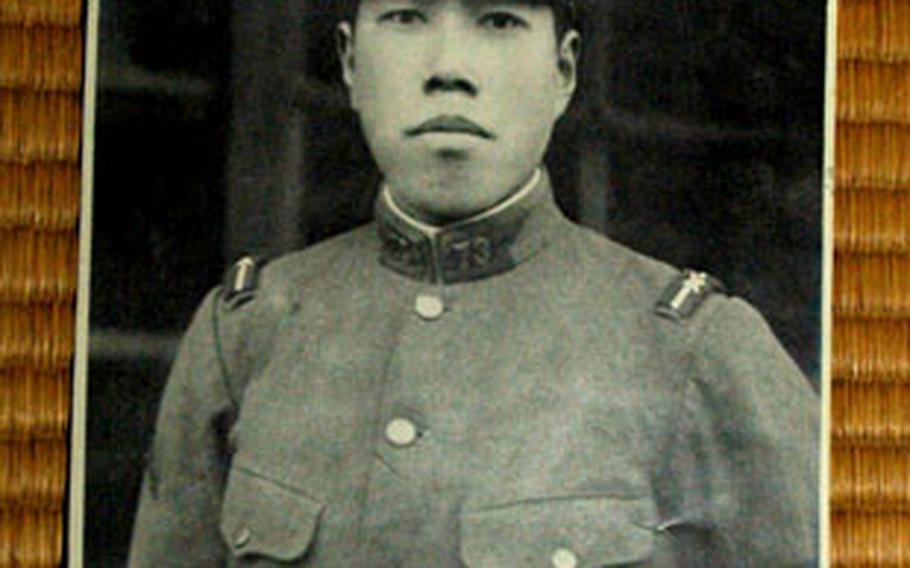 A photograph of Minoru Uchino, a Japanese soldier who died during World War II. A flag once owned by him was returned to his family during a ceremony Monday. (Bryce S. Dubee / S&S)

TACHIKAWA, Japan &#8212; More than 63 years ago, Minoru Uchino and William Bell both left their homes and families behind to fight in World War II.

While only Bell would survive and return home after the war, a chance encounter and trade between the two men would help bring some closure to the Uchino family six decades later.

Near the end of the war, a small group of Japanese soldiers who had been stranded and separated from their units on New Guinea met with members of an American anti-aircraft unit. It was there that Bell, an Army corporal, traded food to Uchino in exchange for a Japanese flag signed by well-wishers and supporters from back home.

Bell took the flag home with him, packed safely in a locker alongside other valued possessions where it remained until his death.

"After he passed away in 1981, my mother, Willia &#8216;Betty&#8217; Bell, opened the locker and discovered the old letters and the flag," Chuck Bell said in a letter to the Uchino family. "She left them there as keepsakes for nearly 25 more years."

Upon her death in 2005, Chuck, Bell&#8217;s only son, found the flag while he and his wife were going through old family possessions.

"After seeing the flag and reading the letters, we felt that the flag should return to Japan and if possible to the soldier or his family," Bell wrote.

That goal was realized during an emotional ceremony Monday when the flag was given to Uchino&#8217;s family by members of the U.S. Army on behalf of the Bell family.

"It&#8217;s good that we have gotten the flag back," said Fumio Uchino, Minoru&#8217;s younger brother, who said it was the only item from the war owned by his brother that has been returned to the family.

The 87-year-old Tachikawa resident went on to say it&#8217;s hard for him to be too happy about the situation because his brother never came home.

Getting the flag back to Japan was a lengthy process that began roughly six months ago.

"We were fortunate to have a good friend, Mr. Naofumi Takamori, a retired captain in the Japanese Maritime Self Defense Force," Chuck Bell said in the letter.

After meeting with the Bells during a visit to the States last spring, Takamori said he returned to Japan with the flag and began his search immediately.

He said his work was made more difficult because many villages that existed during World War II have since been incorporated into larger cities. He said he searched from Okinawa to Hokkaido before finally finding the right location.

"At first I was very glad to find the family," Takamori said. "But I was also anxious about their reaction and had to take it slow."

Minoru&#8217;s son Takashi, who was barely a toddler when his father went off to war, said he was glad to see the flag&#8217;s return even though he has no real memory of his father.

The flag gave him a physical connection to his father and showed him that his father was there in the war, he said Monday.

Lt. Col. David Causey, Camp Zama&#8217;s garrison chaplain, who presented the flag to the family, said he was honored to take part in the ceremony and represent the U.S. military.

"As a chaplain, we want to bring healing to people," he said.

"The family waited more than 60 years for him to return home; however, he never did," said Akihisa Nagashima, a member of the Japanese House of Representatives who was at the ceremony. "This was a really moving ceremony and a good event for both the families."

Tachikawa city councilman Daisuke Ito said seeing the flag helped him connect with his own grandfather who also served in World War II.

"Events like this can help teach a new generation about what happened," he said.