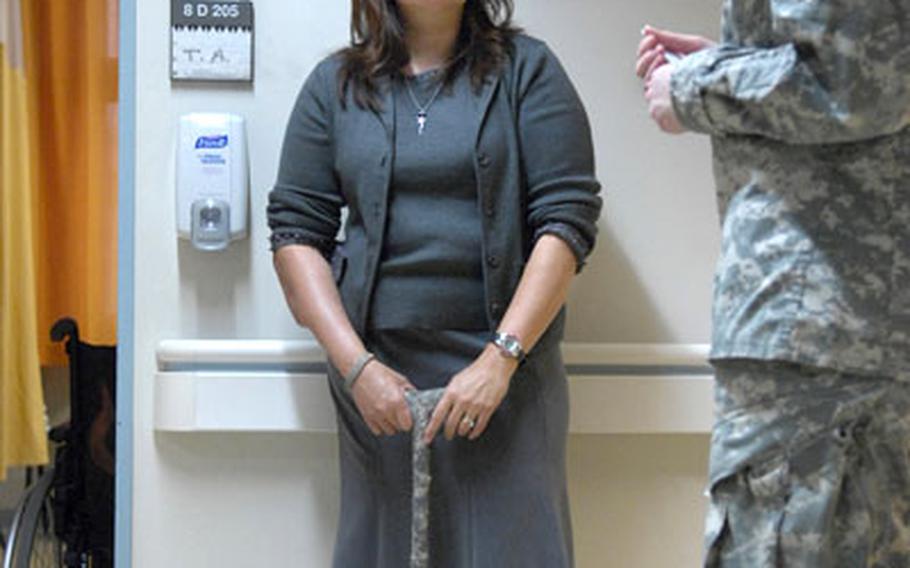 Tammy Duckworth, the director of Illinois’ Department of Veterans Affairs, talks with Army 1st Lt. Stephanie Jaross, a registered nurse, at Landstuhl Regional Medical Center, Germany. Duckworth, who lost both legs after being shot down in Iraq, visited LRMC to speak at a National Disability Awareness Month meeting and thank medical staff for its service. In November 2004, Duckworth made a brief stopover at LRMC but was unconscious the entire time. She credits the staff with helping saving her arm. (Ben Bloker / S&S)

Tammy Duckworth, the director of Illinois’ Department of Veterans Affairs, talks with Army 1st Lt. Stephanie Jaross, a registered nurse, at Landstuhl Regional Medical Center, Germany. Duckworth, who lost both legs after being shot down in Iraq, visited LRMC to speak at a National Disability Awareness Month meeting and thank medical staff for its service. In November 2004, Duckworth made a brief stopover at LRMC but was unconscious the entire time. She credits the staff with helping saving her arm. (Ben Bloker / S&S) 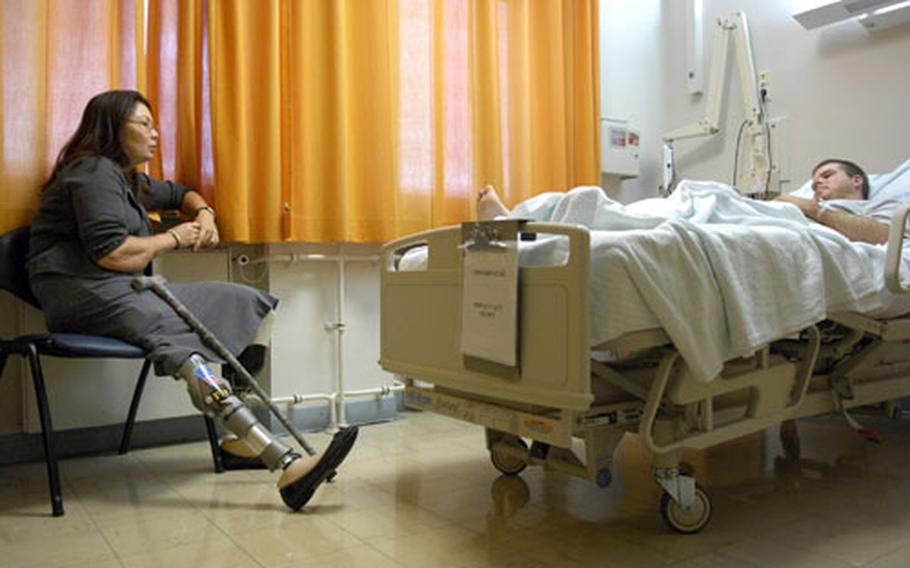 &#8220;Apparently, morphine does nothing for me,&#8221; the director of the Illinois Department of Veterans Affairs said Monday while on a visit to Caserma Ederle. &#8220;Except make me hallucinate and talk to people in the room who aren&#8217;t there.&#8221;

But the former Black Hawk helicopter pilot said that worse than the loss of her legs was the feeling that she had failed her crew. She kept on overhearing snippets of conversation referring to the helicopter &#8220;crash.&#8221; Because she couldn&#8217;t remember most of what happened after getting ambushed on Nov. 12, 2004, she feared the worst.

She found out later there was no crash. She and the crew of the doomed chopper &#8212; hit by automatic weapon fire and a rocket-propelled grenade &#8212; managed to get it down in one piece. She survived through the gallantry of her crew and other helicopters nearby, but the weapons fire mangled her legs.

Duckworth was the keynote speaker at an event marking National Disability Awareness Month at Vicenza. She visited Landstuhl Regional Medical Center on Tuesday and met with servicemembers recovering in the hospital after speaking to the community there.

She still wears her Army uniform occasionally. She&#8217;s now a major in the state&#8217;s National Guard when not carrying out her VA duties. In 2005, she almost won a seat in the 6th Congressional District in the western suburbs of Chicago, running as a Democrat against then-State Sen. Peter Roskam. She lost by about 3,000 votes.

She&#8217;s not ruling out a future run for office, but decided she wouldn&#8217;t run in 2008 because she has a responsibility to see a lot of projects through in her post with the VA. Duckworth is probably best known these days as an advocate for disabled veterans and disabled people in general.

The 39-year-old said she doesn&#8217;t think she did anything any other soldier wouldn&#8217;t have done. And she said most wounded veterans feel the same way.

Many want to return to their units, she said, or be productive in other fields.

Maj. Gen. Frank Helmick, commander of the Southern European Task Force (Airborne), first met Duckworth while she was recovering at Walter Reed. He said he came away from their meeting inspired by her courage and attitude.

Despite all she&#8217;s been through, Duckworth had nothing but praise for military caregivers, whom she said have been unfairly lumped together with &#8220;administrative&#8221; problems at Walter Reed.

She said she doesn&#8217;t remember anything from her half-day stay at Landstuhl. A lot of her first memories of Walter Reed centered around the pain she was experiencing.

She said caring medical professionals &#8212; along with her husband, Maj. Bryan Bowlsbey, and Sgt. 1st Class Juanita Wilson, another amputee who has returned to active duty &#8212; helped her pull through.

She said she can&#8217;t feel sorry for herself when thousands of servicemembers have given their lives serving in Iraq and Afghanistan, leaving grieving family members behind.

Tammy Duckworth lost her legs, but not her sense of humor.

Talking to an audience featuring many active-duty servicemembers Monday, Duckworth joked about a number of topics, including how she&#8217;s able to stay a member of the National Guard.

All joking aside, Duckworth said she believes thousands of wounded veterans will be making a difference in their communities across the States. &#8220;We&#8217;re going to be re-invigorating the disabled community,&#8221; she said.

Those wounded warriors will help change the public perception of those with disabilities, especially the kinds of things disabled people are capable of. Amputees such as herself aren&#8217;t going to be told they can&#8217;t do something simply because they&#8217;re disabled, she said. Sometimes that means learning how to fly an aircraft again&#8212; and she is. Sometimes that means rejoining the ranks &#8212; and she did.