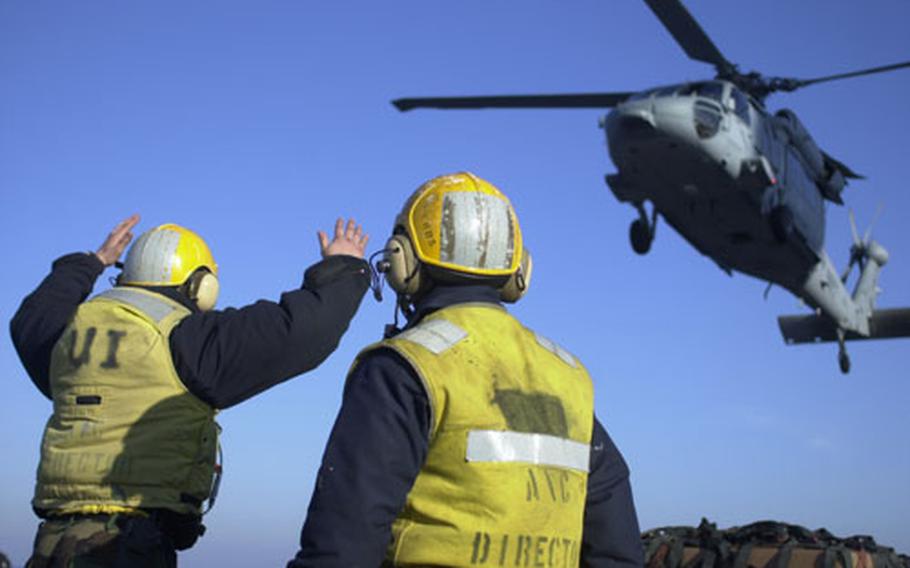 ABOARD THE USS BATAAN &#8212; The helicopter drifted above the ship&#8217;s flight deck and hovered within feet of Pvt. John Purcell&#8217;s helmet.

His mission: Latch a piece of cargo to the belly of the MH-60 Night Hawk and get out of the way quickly &#8212; without getting killed, of course.

Fighting off hurricane-strength winds, Purcell shoved the 6-foot-long hook into the clip and the helicopter lifted the empty pallets into the air. He escaped without a scratch, but the experience left him with an adrenaline rush.

&#8220;The first time you do it you can&#8217;t fathom the fact that you&#8217;re standing underneath a hovering helicopter and your life is in the hands of the man above you as well as the man on your back,&#8221; Purcell said

When a Navy ship is in a hurry, the quickest way to get supplies is by helicopter. Vertical replenishments are routine, but they can be risky, especially at night or under harsh weather.

The Bataan conducted its vertical replenishment, or vert rep for short, on Thursday while in the Mediterranean Sea. The 844-foot amphibious assault ship is on its way to the Persian Gulf to help support the military&#8217;s largest rotation of forces since World War II.

Ships usually need supplies every two weeks. When at sea, they can either receive it by rope or by helicopter.

Sailors and Marines aboard the Bataan got their supplies 17 days after they left the United States on a three-month deployment to drop off Marines and equipment for duty in Iraq.

It took several hours to transfer 85 pallets packed with everything from mail to Mountain Dew. The ship also received thousands of gallons of fuel from the supply ship USNS John Lenthall as it cruised alongside.

Hooking the cargo to the bottom of the aircraft might be the most hazardous part of the operation.

Lance Cpl. Matthew Bishop described standing underneath a hovering helicopter as like standing in the center of a tornado.

Some helicopters such as the CH-53 create so much static electricity that the person on the flight deck must touch a grounding wire. The wind from the blades can be so strong that it can blow a person overboard. The person must avoid getting disoriented under the helicopter so he doesn&#8217;t run into the helicopter&#8217;s landing gear or, worse, the tail rotor.

Pilots and combat cargo team members practice the well-orchestrated operations as often as they can.