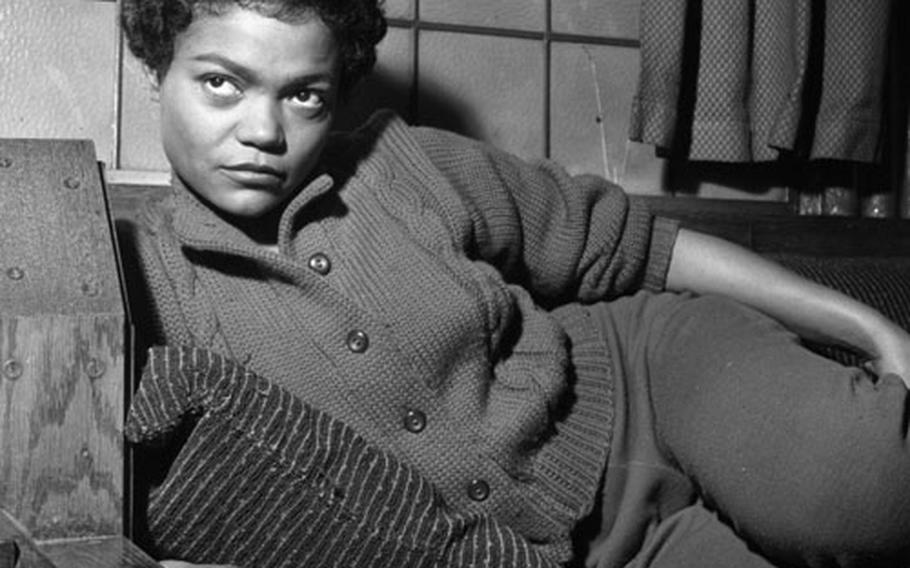 Eartha Kitt, backstage in London in 1958. (Lloyd Borguss/Stars and Stripes)

Eartha Kitt, backstage in London in 1958. (Lloyd Borguss/Stars and Stripes) 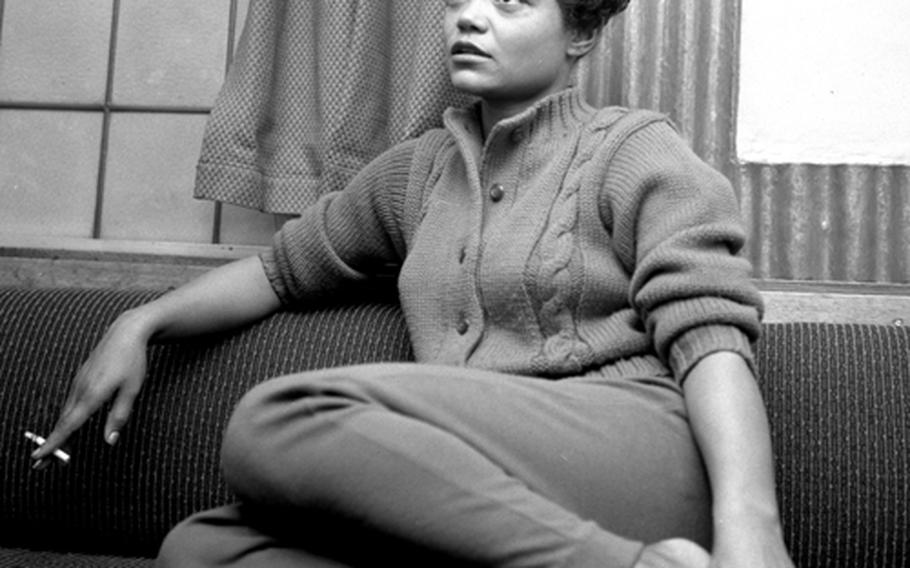 Eartha Kitt is interviewed in London in 1958. (Lloyd Borguss/Stars and Stripes) 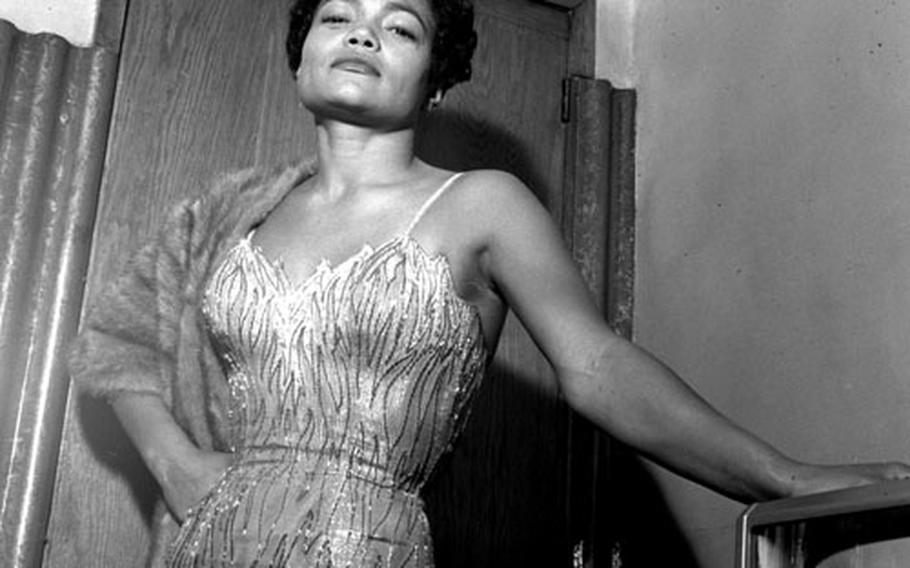 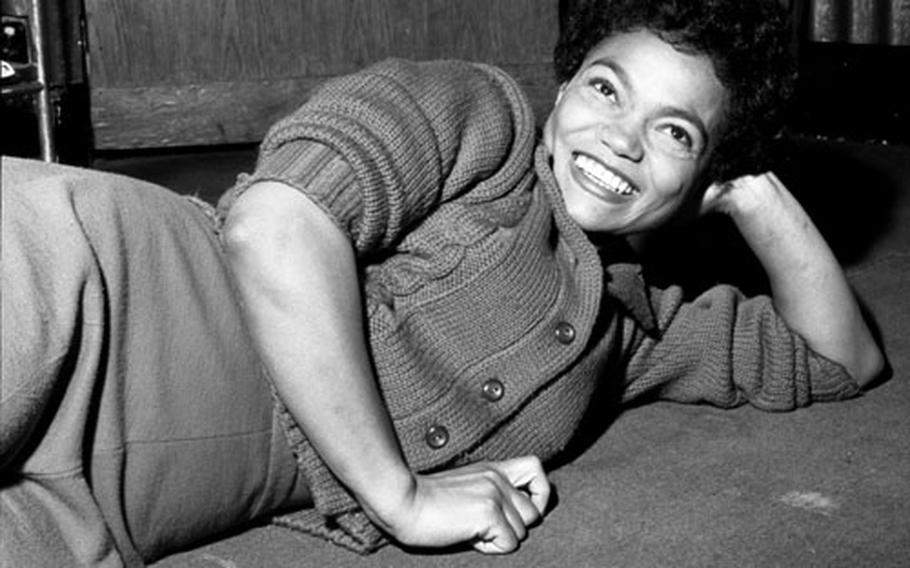 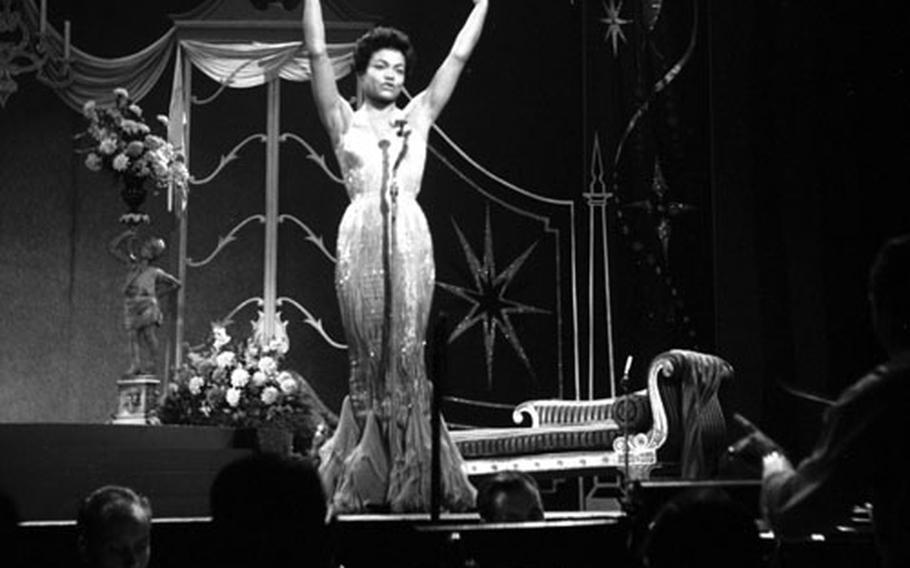 Eartha Kitt onstage in London in 1958. (Lloyd Borguss/Stars and Stripes)

THE FABULOUS Eartha Kitt, lovely kitten with the soft purr, has already had nine full lives as an entertainer — and now she's off on another one.

In London recently, where she stole he show as guest star on Britain's brightest television program, "Sunday Night at the Palladium," the incomparable songstress divulged plans to go dramatic.

"I enjoy acting even more than singing," Miss Kitt said. "It gives the performer more satisfaction since she has the opportunity to develop the character portrayed.

"Singing has always been a lot of fun and it certainly has kept me on the go. I've been all over Europe and America and I've always enjoyed myself because I like traveling so much.

"But acting appeals to me because it's like having a conversation with the audience and it enables one to get much closer to his audience."

Since no one in his right mind should argue with the sensuous Miss Kitt if she wants to get closer, this dramatic business might prove interesting.

The diminutive songbird with the furry voice recently completed a straight role in the Kling Studios' "Anna Lucasta" in Hollywood. Now she's aiming for more of the same.

"There's nothing definite planned yet," Miss Kitt said. "I'm booked for a nightclub tour across the States as soon as I. get back. But "after that, I don't know ..."

Born 30 .years sago in the little town with the incredible name — North, South Carolina — Miss Kitt has come a long way in the interim. To wit: during her stay in London she was presented to Queen Elisabeth.

With a voice that British critic Kenneth Tynan described as "the vocal soul of every Siamese cat who ever lived," the throaty Eartha skyrocketed to sudden fame on Broadway in 1952.

Appearing as a virtual unknown in "New Faces of 1952," she brought the house down singing "Monotonous," "I Wanna Be Evil" and "C'est Si Bon."

The wild applause climaxed a career that started when she was 15 years old and signed "by sheer luck" as a dancer with Katherine Dunham's ethnic dance group touring Europe and Latin America.

Shortly afterwards, the versatile Eartha turned to singing, shattering nightclub audiences in Cairo, London, Paris and Istanbul. New York remained to be conquered — and it fell for Kitt like a ton of bricks.

The plaintive thrush went from one ovation to the next following her Manhattan triumph, singing numbers in French, Spanish, German, Turkish, Hebrew, Swahili and English with equal success.

The job of finding new songs for her repertoire is something of a problem, Miss Kitt said, because most of the music being written in the U.S. today is rock 'n' roll.

"Rock 'n' roll may be alright in itself," 'Miss Kitt commented. "There's room, in this business for all, kinds of music. But it's just not for Eartha."

Broadway tunesmith Jerry Dolin, Miss Kitt's musical director, has composed a ballad that Eartha is currently warbling with success. It's called "I'd Rather Be Burned As A Witch."

The provocative Kitt repertoire is designed to perpetuate the legend of Eartha as a femme fatale, devouring men, minks and Cadillacs with all .the disinterest of a woman of the world who has owned and done everything four times and hated it.

Eartha herself helped feed this fiction in real life, hobnobbing with such world figures as Prime Minister Pandit Nehru of India and the late Albert Einstein. In 1957, she authored an autobiography, "Thursday's Child."

The shift to a straight dramatic role in "Anna Lucasta was not entirely new to Eartha. She played in the stage production, "Mrs. Patterson" in 1954.