Verifications of errant attacks fail to lead to U.S. acknowledgement Cho Byung-gyu stands near the entrance of Gokgyegul Cave where 360 people died on Jan. 20, 1951, after the United States bombed a nearby village. Most of those inside the cave, including refugees who were fleeing the North Korean forces, suffocated after the U.S. dropped napalm bombs, although some were shot as they left the cave. Approximately 10 people, including Cho, then 4 years old, survived the attack. (Ashley Rowland / Stripes)

Cho Byung-gyu stands near the entrance of Gokgyegul Cave where 360 people died on Jan. 20, 1951, after the United States bombed a nearby village. Most of those inside the cave, including refugees who were fleeing the North Korean forces, suffocated after the U.S. dropped napalm bombs, although some were shot as they left the cave. Approximately 10 people, including Cho, then 4 years old, survived the attack. (Ashley Rowland / Stripes) 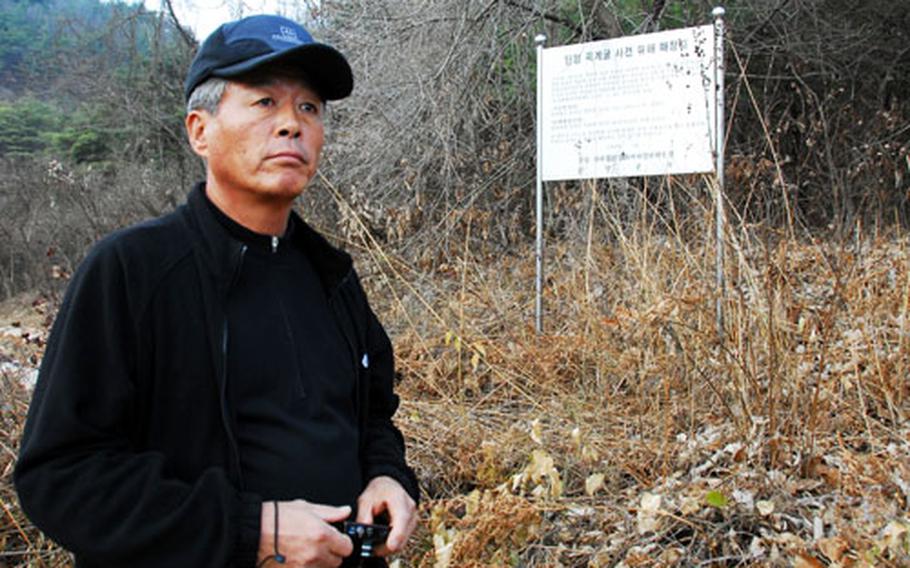 Cho Byung-gyu stands at the edge of a wooded area that is the mass grave for 172 unidentified victims of a 1951 U.S. air raid on a tiny South Korean village. Many among the 360 who died were refugees, and entire families were killed during the attack, making it impossible to identify them. Each grave is marked with a stone and a number assigned to them. (Ashley Rowland / Stripes) 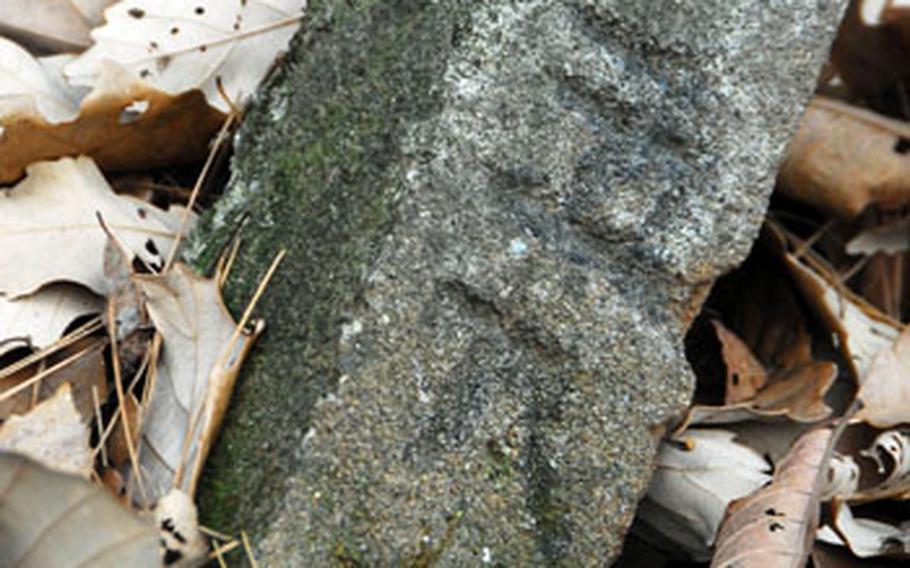 A concrete stone marks a mass grave for the 172 unidentified victims of the Jan. 20, 1951, U.S. air raid on a village in South Korea. (Ashley Rowland / Stripes)

DANYANG COUNTY, South Korea &#8212; Cho Byung-gyu has only fleeting memories from the night he hid in a cave nearly 60 years ago: pitch-black darkness, the smell of tobacco and tightly packed bodies, and his aunt holding him tightly as the young child cried nonstop.

Hundreds of peasants waited inside the apparent safety of the cave for American airstrikes on the tiny mountain village of Sang-ri, where retreating North Korean forces were believed to be passing through. Afraid the toddler&#8217;s wailing would give away their hiding spot, they kicked out Cho and his aunt.

Between 200 and 360 people died in the cave that morning, according to survivor accounts and South Korean officials. Most suffocated from the U.S. napalm bombs meant for North Korean soldiers, who survivors say had long since fled the area. Others died from burns or were strafed by passing planes. Only 10 survived.

The Jan. 20, 1951, attack at Sang-ri is one of dozens of errant U.S. attacks on civilians that have been verified by South Korea&#8217;s Truth and Reconciliation Commission, which is investigating nearly 400 other such incidents involving U.S. troops.

But nearly 60 years after the end of the Korean War, the U.S. has acknowledged only one of those attacks, despite calls from survivors for apologies and compensation. Nor has the South Korean government asked the U.S. to investigate or apologize for those incidents.

Lee Young-jo, president of the commission, said only eight of its 15 members voted to verify that the Sang-ri attack occurred because of inconsistencies in official records, including differences between U.S. bombing coordinates and the coordinates of the cave.

A U.S. State Department official said the U.S. is &#8220;aware of the alleged incident&#8221; but referred questions about it to the South Korean government.

A spokesman for South Korea&#8217;s President Lee Myung-bak did not comment on the bombing or on the commission&#8217;s work in general.

That response is typical from South Korea, which doesn&#8217;t want to embarrass its closest ally, said Kim Dong-choon, former head researcher for the commission.

Kim said some attacks on civilians were unavoidable.

That may have been the case at Sang-ri. According to the military reports, U.S. pilots observed numerous enemy troops in the area before 13 U.S. planes bombed the area around the cave.

After the airstrike, a now-declassified report said U.S. troops found the bodies of 75 North Koreans inside a cave.

A later patrol found they were refugees, not soldiers, another report said.

The commission found that the U.S. violated humanitarian law by doing nothing to protect refugees affected by the blockade, and should have conducted better reconnaissance to make sure it was bombing North Korean soldiers, not civilians.

The only U.S. acknowledgment of its role in wartime attacks on civilians came in 2001, following a 1999 Associated Press investigation into the U.S. shooting of possibly hundreds of Korean refugees at the village of No Gun Ri.

The AP and Pentagon differ on the U.S. complicity in the attack, but former President Bill Clinton issued a statement expressing &#8220;deep regret&#8221; that stopped short of an apology in January 2001 before leaving office.

The AP story indicated that U.S. troops fired at the civilians on orders from commanders. A U.S. Army investigation, released by the service in a 2001 report, acknowledged that civilians were killed at No Gun Ri but contended that &#8220;some soldiers may have fired out of fear in response to a perceived enemy threat without considering the possibility that they might be firing on Korean civilians.&#8221;

The report said the U.S. review team could not determine how many civilians were killed.

He feels betrayed by the South Korean government for not pushing the U.S. to apologize for the attack.

&#8220;I think it was a mistake they made during combat operations. But I hope they admit their mistake and do something for the victims&#8217; families before [the families&#8217;] grudges grow deeper and deeper.&#8221;