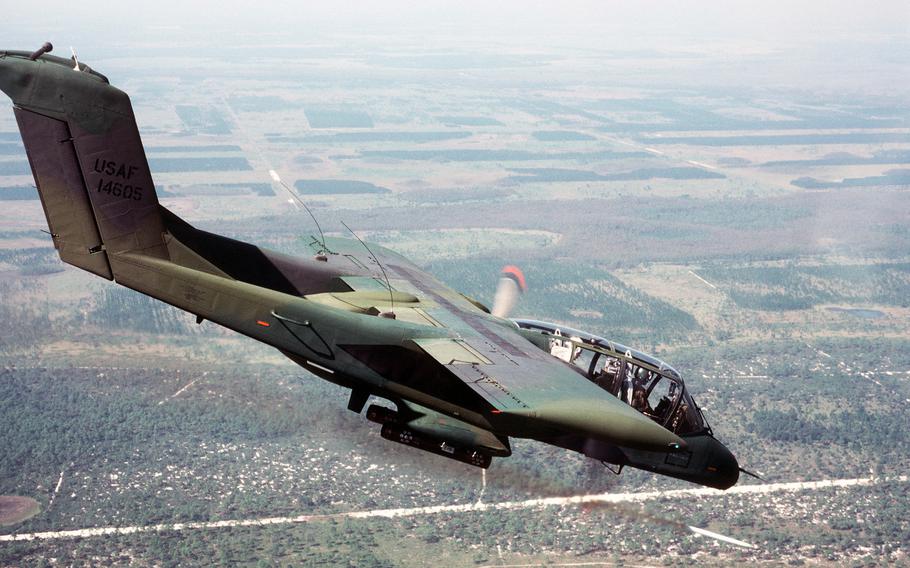 An air-to-air right side view of an OV-10 Bronco aircraft firing a white phosphorous smoke rocket to mark a ground target. Two of the Vietnam-era light attackers were deployed to the Middle East last year in as part of an evaluation of their ability to perform counter-insurgency missions. (Bill Thompson/U.S. Air Force)

An air-to-air right side view of an OV-10 Bronco aircraft firing a white phosphorous smoke rocket to mark a ground target. Two of the Vietnam-era light attackers were deployed to the Middle East last year in as part of an evaluation of their ability to perform counter-insurgency missions. (Bill Thompson/U.S. Air Force) 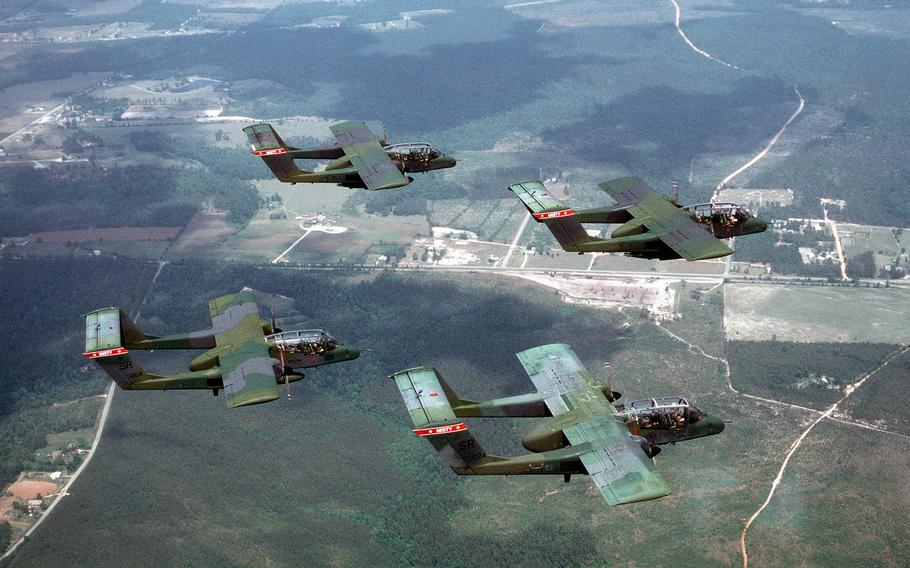 Four OV-10A Bronco aircraft from the 20th Tactical Air Support Squadron fly in a diamond formation. Two of the Vietnam-era light attackers were deployed to the Middle East last year in as part of an evaluation of their ability to perform counter-insurgency missions. (Hans H. Deffner/U.S. Air Force)

The U.S. military is considering whether a Vietnam-era propeller-driven airplane could be useful in the fight against the Islamic State, after what appeared to be a successful trial run last year.

Two OV-10 Broncos were deployed for barely three months last summer and fall as part of the international coalition battling Islamic State militants in the region, according to the U.S. Central Command.

Capt. Bryant Davis, a CENTCOM spokesman, said the planes had been deployed “to a location in Southwest Asia” as part of an evaluation to determine whether they “increased effectiveness of airpower in a counterinsurgency ... while reducing cost and preserving high-end special aviation resources, such as the F-15E, B-1B and F/A-18, which are currently performing similar missions.”

The slow, twin-boom, twin turbo-prop planes originally built by North American Rockwell — now part of Boeing — first entered service with the U.S. Marines in 1968 in Vietnam, and soon thereafter with the Air Force and Navy.

The little two-seater rapidly established a reputation for dependability, versatility and ease of maintenance.

Due to its ability to bridge the gap between the mission spectrums of jets and helicopters, it proved ideally suited for a wide range of counterinsurgency and other roles. And with a cruise speed of 220 mph, it was more maneuverable and much cheaper to operate than jets, and it was faster and more versatile than helicopters.

Typical armament in the attack role consisted of four machine guns and a variety of air-to-ground rockets. The aircraft even had a utility bay behind the cockpit big enough to accommodate several troops, two casualties, or 3,200 pounds of supplies.

In Vietnam, OV-10s performed forward air control duties, close air support, target-marking, supply-route interdiction missions and waterway patrols in the Mekong Delta. Because of the plane’s short take-off and landing characteristics and the ability to operate from unprepared airstrips, it was frequently used in a quick-reaction role at remote mountain outposts.

In view of its tactical versatility, OV-10s were purchased by a number of foreign nations after the Vietnam War, to include Germany, Thailand, Venezuela, the Philippines, Indonesia, Morocco and Colombia. A handful are still believed to be in service.

The U.S. Marines retired their final Broncos in 1995, following their employment in Operation Desert Storm in Iraq and Kuwait.

Since then, surviving planes have been used for fire-fighting, target-towing, in the drug war, and by NASA for aeronautics research. Two of these aircraft appear to have been used for last year’s experimental deployment in the Middle East.

Although Boeing proposed a modernized model five years ago, it remains unclear whether the planes will be recalled into service anytime soon.

Lt. Gen. Bradley Heithold, the head of the Air Force Special Operations Command, said last month that the combat trial proved that the aircraft had “some utility.”

But the data from the experiment is reportedly still being analyzed, military officials said.

“Information in the report will help DOD decision makers determine if this is a valid concept that would be effective in the current battle space,” Davis said, adding that because the report was still a draft it would be premature to provide further details.

Stars and Stripes reporter Chris Church in Bahrain contributed to this report.