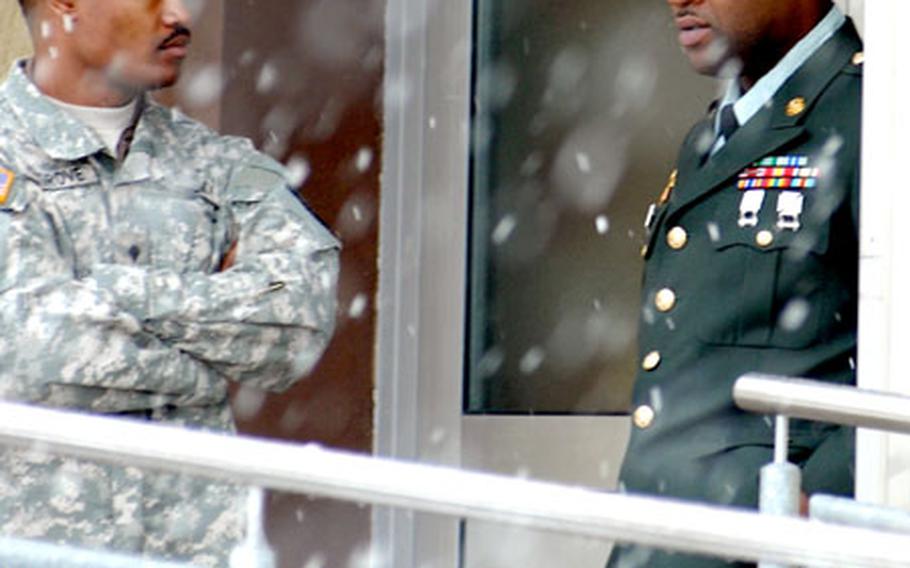 VILSECK, Germany &#8212; Pvt. Bobby Morrissette&#8217;s acquittal on a voluntary manslaughter charge for his role in the 2005 gang initiation beating death of Sgt. Juwan Johnson makes a mockery of claims the Army is tough on gangs, the dead soldier&#8217;s mother said Thursday.

Johnson was badly beaten in a Gangster Disciples initiation, known as a jumping-in ceremony, near Kaiserslautern on July 3, 2005. He was found dead in his barracks room the next day.

In additional to the voluntary manslaughter charge, Morrissette was also acquitted on a charge of conspiracy to commit aggravated assault.

Grammel did find Morrissette guilty of a number of other charges, including participating in gang initiation rituals, impeding an investigation, impeding a trial by court-martial and willfully disobeying a commissioned officer. He also was convicted of committing an indecent act on a female in the presence of another person and wrongful use of a controlled substance, both stemming from a separate incident.

Morrissette was sentenced to 42 months&#8217; confinement and a bad-conduct discharge.

During the three-day trial, Cockrell and others listened to witnesses describe how up to nine gang members hit and kicked Johnson for six minutes during the initiation. She left the court in tears during testimony on his injuries, which were listed in an autopsy report.

"In my opinion, everybody who was there is equally culpable," she said.

Those involved have shown no remorse and are still gang members, she said. During Morrissette&#8217;s court-martial, for example, one of the witnesses, Airman Nicholas Sims, flashed a gang sign and referred to Morrissette as "my brother," she said.

"[The Gangster Disciples] talk about family. That&#8217;s not how they treated my son," she said.

During the court-martial, prosecutors argued that the court needed to send a message that gangs in the military would not be tolerated.

"The military rank structure meant nothing to this gang. These gang members would unquestioningly follow the orders of their governor," prosecution lawyer Greg O&#8217;Malley told the court.

However, Morrissette&#8217;s lawyers argued that the group he associated with was not a criminal enterprise and could not be characterized as a gang. They cast doubt on the integrity of prosecution witnesses, some of whom were also gang members who had lied in past statements about the case.

Morrissette, who smiled broadly after the verdict, apologized in an unsworn statement for "whatever happened to Sergeant Johnson" but made no effort to disassociate himself from the Gangster Disciples.

Cockrell said she plans to attend the trial of former Airman Rico Williams, the alleged leader of the Kaiserslautern branch of the Gangster Disciples, who is charged with second-degree murder in relation to his involvement in Johnson&#8217;s death.

Young men should get a briefing on gang activity when they join the military, she said.

"I can&#8217;t believe what was in the mind of my son when he thought about joining this gang. This was not the guy I sent to the military," she said.