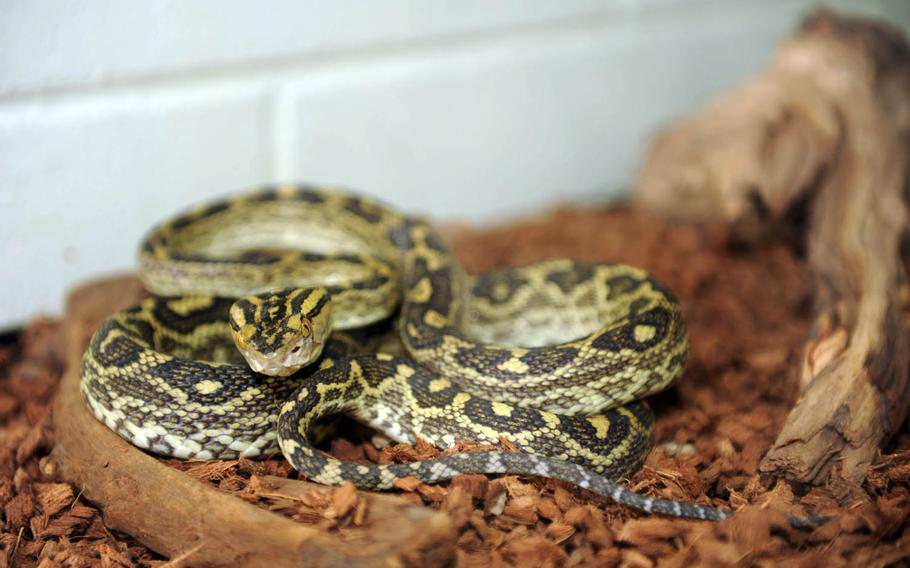 A venomous habu snake rests in a reptile tank at Kadena Air Base, Japan, in 2013. (Hailey Davis/U.S. Air Force photo)

A venomous habu snake rests in a reptile tank at Kadena Air Base, Japan, in 2013. (Hailey Davis/U.S. Air Force photo) 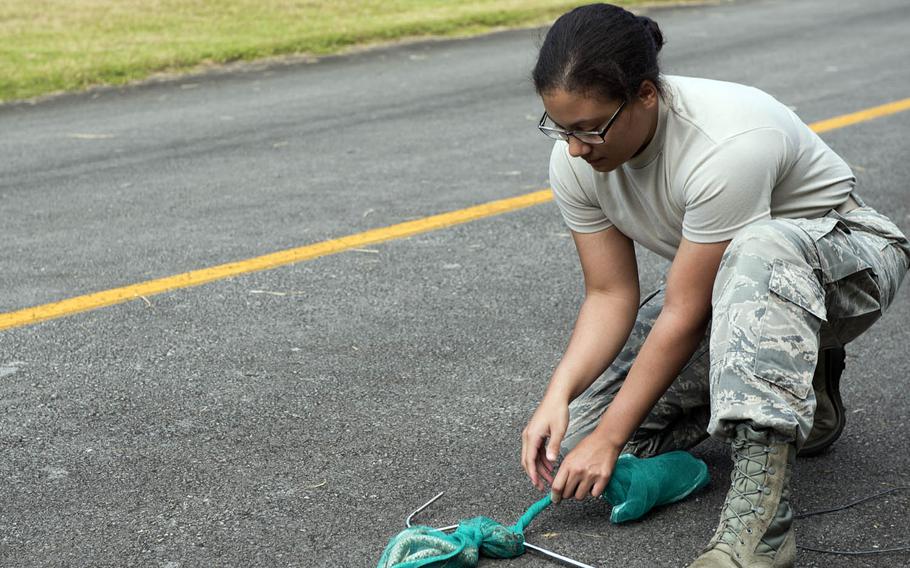 CAMP FOSTER, Okinawa — Japanese authorities are warning people to watch out for a venomous pit viper that’s been on the move in Okinawa.

A 3-foot-long habu snake was found for the first time last month on Aguni, one of several small islands that make up Okinawa prefecture. The yellow-and-black nocturnal reptile, which can grow up to 5 feet long, lives in groves and grassland. It can also be found slithering through city parks, preying on rats, rabbits, lizards and cats.

It’s one of 22 snake species, including eight venomous types, within Okinawa, says the Okinawa Prefectural Office’s website, which has been warning people to “Habu Ni Chui!,” or “Be On Alert for Habu!”

Those bitten by a habu experience painful swelling and can die without medical attention, which often involves anti-venom, the website says. First-aid treatment should involve applying pressure to restrict blood flow to the bite area.

Okinawa officials have shipped anti-venom to Aguni and are checking the tiny island to see if any other habu snakes made it there, said Mayumi Arakaki, chief of the pharmaceutical affairs division at Okinawa Prefectural Government’s Department of Public Health and Medical Care.

“[Butler] does not track how many Habu bites are reported each year,” she said in an email. “If someone comes across a Habu on base, they should keep a safe distance away and call 911 and report that you are calling for PMO Animal Control. Carefully watch the Habu to ensure where it is until Animal Control arrives on-scene.”

It is difficult to determine how many habu snakes are on Okinawa because their primary habitats include jungles, sugarcane farms, wood piles, tombs and trash piles, Collins said.

“Do not approach or attempt to chase a snake if you see one,” she said. “Avoid walking through bushes and areas with thick vegetation. If bitten, apply pressure (do not use a tourniquet) and immobilize the injured part of the body. Do not cut or suck around the wound.”

As a general rule, people should avoid any animal found on a Marine Corps installation, Collins said.

“If a person sees a stray dog, a stray cat, Habu or other animal … they should not touch them, because you never know if the animal could attack, and if there is danger call 911,” she said. “Other services have their own procedures, so we recommend contacting Kadena Air Base, Torii Station and White Beach for their specific information.”