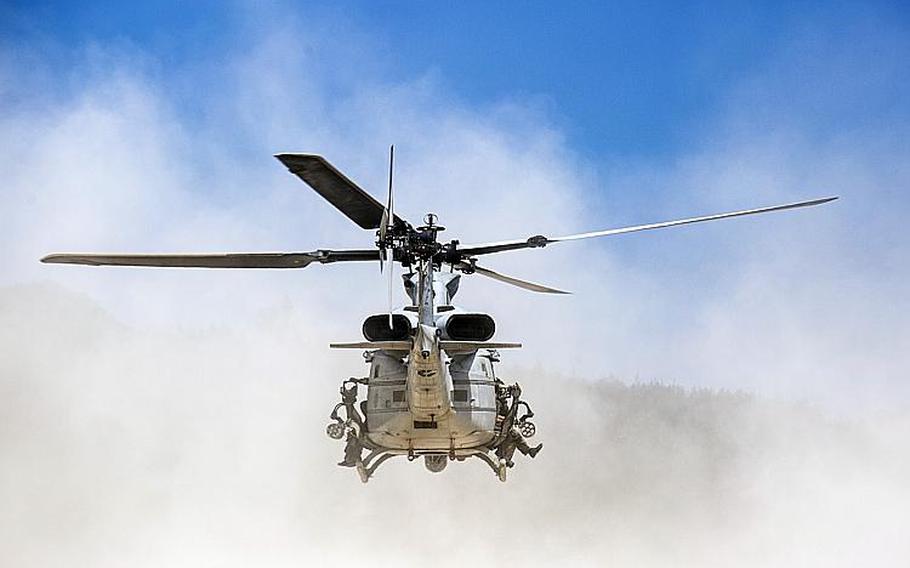 A UH-1Y Venom departs from a beach during an exercise on Okinawa on July 25, 2018. (Austin Weck/U.S. Marine Corps photo)

CAMP FOSTER, Okinawa — No injuries were reported after a U.S. military helicopter made an emergency landing Wednesday on an island off Okinawa’s coast, Marine Corps and Japanese officials said.

The Marines told Japanese officials that a UH-1Y Venom from the 1st Marine Aircraft Wing made a “precautionary landing” at about 3:45 p.m. on Kume Island after a warning light came on, said Okinawa Defense Bureau spokesman Masashi Katsuren and Kumejima town hall official Yuhka Nakasone.

The aircraft landed in a grass field next to a runway at Kumejima Airport, Nakasone said.

There were no reports of damage or injuries, including to the Venom’s five crew members, Katsuren and Nakasone said.

“The aircraft systems performed as designed and notified the pilot of the issue,” III Marine Expeditionary Force spokesman Capt. Eric Flanagan said in an emailed statement. “The aircrew performed as trained and chose the safest option, landing the aircraft in accordance with standard procedures … We apologize for any inconvenience this may have caused while our forces trained to support the U.S.-Japan security alliance.”

The Venom’s crew performed a safety check before taking off again at about 5:15 p.m., Nakasone said.

The aircraft flew first to Kadena Air Base, arriving at around 5:43 p.m., and then to Marine Corps Air Station Futenma, where it arrived at approximately 6:40 p.m., Katsuren said.

The aircraft was conducting routine training at the time of the incident, Flanagan said.

A pair of Ryukyu Air Commuter flights were delayed more than than an one hour and a half due to the incident, affecting 94 passengers, the Okinawa Times newspaper reported.

Military aircraft safety is a grave concern among locals on Okinawa due to past deadly mishaps.