Venice to take swipe at litterbugs with fine Officials in Venice, Italy, believe that trash (and pigeons) need to be dramatically reduced in the heart of the city in order to save money and protect famous sites. So a series of measures have been introduced to try to change tourists’ behaviors. (Kent Harris / S&S)

Officials in Venice, Italy, believe that trash (and pigeons) need to be dramatically reduced in the heart of the city in order to save money and protect famous sites. So a series of measures have been introduced to try to change tourists’ behaviors. (Kent Harris / S&S) 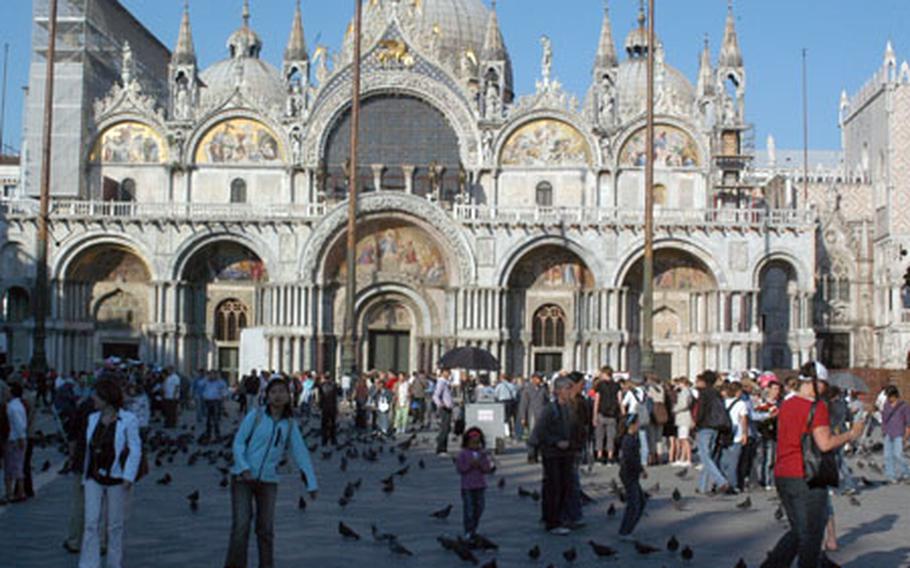 St. Mark’s Square in Venice is one of the most popular spots for tourists to visit in Italy. City officials say tourists are more than welcome to keep coming in large numbers. But they’ve issued new regulations prohibiting eating, drinking and sitting in the area. (Kent Harris / S&S) 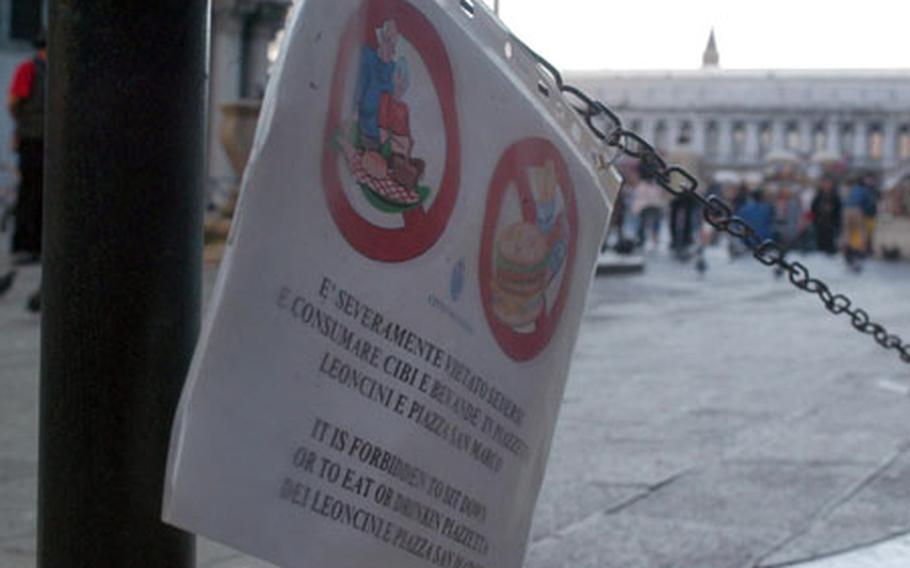 Signs have already been posted in Piazzetta dei Leoncini, the small square adjoining Piazza San Marco in Venice, telling tourists they can’t eat, drink or sit down. Those found in violation of the new regulations targeting the heart of the city face fines up to 500 euros. (Kent Harris / S&S)

Not so fast with those plans for St. Mark&#8217;s. The rules have changed.

If you do, it could be one heck of an expensive picnic.

In an effort to reduce the trash left in the famous square and protect the environment, the city is introducing a series of regulations for St. Mark&#8217;s and the surrounding area. They include:

Six people hired by the city, dubbed &#8220;decency patrols&#8221; by at least one Italian publication, will start patrolling the area in June. Their mission, Vianello said, will be to nicely remind people to follow the rules.

Local police will be called to deal with those who don&#8217;t obey.

In addition, routine police patrols will set their sights on rule-breakers, potentially handing out fines without warnings. Those fines will range from 25 to 500 euros.

He&#8217;s joking. The rules don&#8217;t target Americans specifically. They&#8217;re aimed at all visitors to the city, including Italians.

But he&#8217;s very serious about efforts to try to take on what he believes is a huge environmental dilemma.

Some of that concern, such as the massive amount of boat traffic along the canals that constantly wear at the foundations of buildings hundreds of years old, can&#8217;t be easily solved.

But the city is attempting to take on at least one environmental concern: waste caused by fast food.

Vianello said trash from McDonald&#8217;s, which has a restaurant a few steps off the square, makes up half of the garbage picked up on St. Mark&#8217;s.

Picking up trash in Venice is expensive, he said.

It&#8217;s emptied from cans by hand and hauled to a boat, which transports it to a city plant where it is burned to generate energy.

Venice has to pay about 15 million euros a year beyond what local taxpayers pay for such services.

Vianello admits that tourism is vital to the city economy. And he says reports of taxing tourists to enter the city or limit the number who enter are false.

Take away the tourists and Venice would be a &#8220;dead city,&#8221; he said. The population has been shrinking for decades.

The city plans to ask the federal government to allow it to keep a greater percentage of taxes already generated, though. It also wants the authority to tax businesses at different rates for the impact they have on the local environment.

McDonald&#8217;s or one of the dozens of nearby shops selling sandwiches, pizza or ice cream generate a lot more trash than a jewelry store does, Vianello argues.

The rules are designed only for St. Mark&#8217;s and the nearby vicinity. And the half-dozen or so cafes, with hundreds of tables and chairs set up around the square, won&#8217;t be affected.

Many cost-conscious tourists tend to avoid the cover charges and higher prices such restaurants often charge.

Millard said he&#8217;d rather pick up something quick and cheap and explore the city while eating.

Phil Bellomy, an American tourist from Malibu, Calif., nodded with understanding when told about environmental concerns and the new rules.

&#8220;Tourists are pretty good for the most part, I would think,&#8221; he said between sips from a cup full of green crushed ice.

What about those sometimes pesky pigeons?

Michele Vianello, deputy mayor of Venice, said the city has tried all kinds of ways to limit the population of its avian residents &#8212; whose population is beyond his ability to estimate.

In recent years, the city has tried to place restrictions on feeding the pigeons and on those who sell bird feed in the square. But he said that met fierce resistance, leading him to believe the matter will eventually wind up in court.