Venice has water in more than its streets 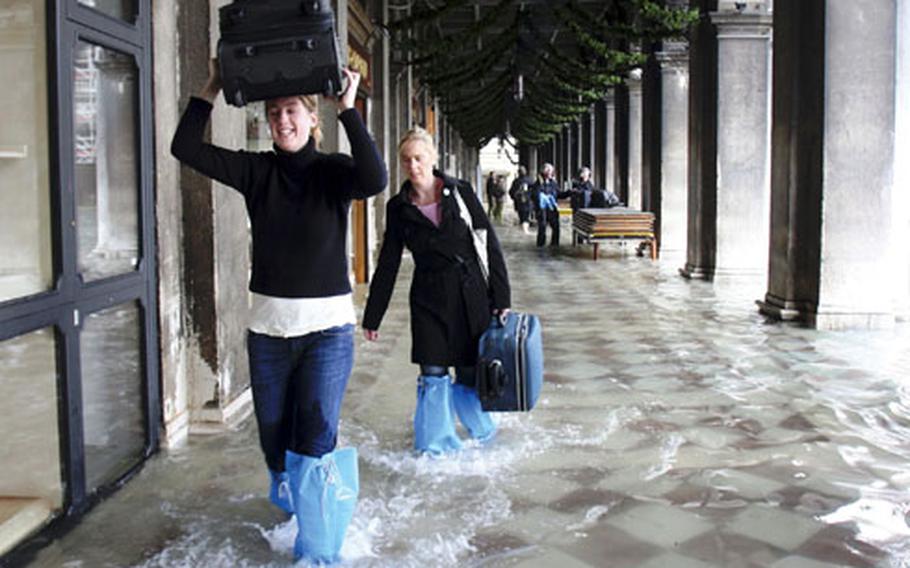 Tourists carry their luggage as they make their way through high water in Venice, Italy, on Monday. It’s the worst flooding in Venice in more than 20 years. (Luigi Costantini / AP)

Headed to Venice, Italy, in the next few days? Bring your hip waders.

After one of the highest tides in more than 130 years, the city experienced massive flooding Monday, with knee-deep water filling the streets, The Associated Press reported.

As of yet, the waterlogged city hasn&#8217;t posed problems for Army and Air Force travel offices on Caserma Ederle and Aviano Air Base.

Ederle, in Vicenza, is about an hour away from Venice. At the Army Morale, Welfare and Recreation&#8217;s Information, Ticket and Reservation office, there hasn&#8217;t been any talk of Venice at all, said Gysell Carteret.

A travel clerk for a year and a half, Carteret said that normally the people who want to see Venice are out-of-towners visiting someone on the post. "People who live here aren&#8217;t going to be trying to go to Venice if they know [about the flooding]," she said.

Sergio Gingillino, manager of Aviano&#8217;s Information, Tickets and Travel office, said though requests for Venice have also been thin, "of course we&#8217;ll tell [customers] that now&#8217;s not the best time to go to Venice, that they need to wait until the water goes down."

St. Mark&#8217;s Square, Venice&#8217;s central hub and also one of its lowest points, saw tourists moving on to still-dry cafe tabletops. One local resident rowed a boat across the square, the AP said.

The water was high enough to make the traditional post-flood wooden walkways useless, as they would have floated away. Also, city water buses were out of commission as their boarding platforms were submerged, the AP said.

Though the high water has hurt sales for souvenir shops and some ground-floor merchants, the flooding hasn&#8217;t affected any historical buildings or art, AP reported. And while the water level was 21 inches higher than capacity Monday, it was nowhere near the record 76 inches in 1966, which displaced more than 3,000 people.